Kaun Banaega Sarkar? In Absence Of Majority, How Regional Leaders Will Play Kingmaker

With neither BJP-led NDA nor the Congress-led UPA sure of forming the government, a fractured verdict on May 23 will bring regional parties into focus. The possibilities are manifold with every party expected to extract their pound of flesh 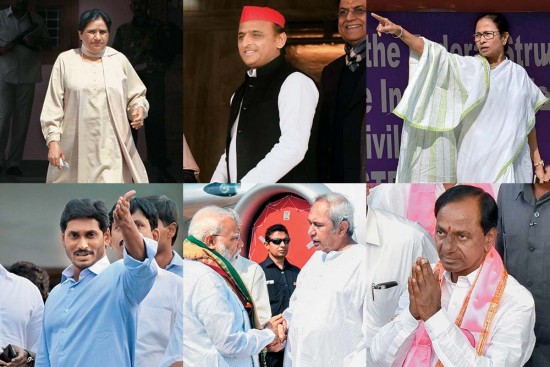 Predicting election results is a perilous job at the best of times. To try and forecast how the sum total of an infinite mass of micro-factors will turn out, in a strident and polarised but very-many-sided election such as the present one is nothing less than foolhardiness. Yet a lot of political pundits are willing to stick their necks out to insist it will be a hung Parliament. Not just that no single party will get a majority on its own, also that no pre-poll formation—neither the BJP-led NDA nor the Congress-led UPA—is likely to be anywhere near a reasonable stab at government formation by itself.

To be sure, it’s only one in a triad of broad possibilities, with many potential variations within the three. But it is certainly one that needs to be accounted for seriously—the idea that strong non-NDA, non-UPA segments, not many of whom have a stable dialogue or terms of engagement with each other, may be holding the key to India’s next government. For, the allusion is not to a 2004 scenario when a confident BJP, riding high on India Shining, had an upset loss to a new Congress-led alliance. The frame of reference must extend back to 1996, when a United Front government was formed with outside support of the Congress. That government had fallen within two years, forcing another general election. The broad formal parameters of consensus among the constituents of a coalition, which can ensure stability, are therefore of vital importance.