It is hardly usual for a medical store to be known across a state as an institution of sorts, its name a byword for trust. Such is the faith reposed in Bindroo Pharmacy—named after its owner, Makhan Lal Bindroo, 65—a household name in Kashmir. ‘Bindroo’ was the last resort for getting “genuine medi­cines in the Valley”. In a state where chemists selling medical drugs are widely suspected of selling spurious medicines, Bindroo was above suspicion. The most trusted chemist in the Valley, people would prefer to be in a queue outside his shop for a strip of paracetamol, rather than buying it elsewhere. The circumstances of his demise, therefore, shook many Kashmiris to their core.

The killing of Makhan Lal Bindroo on October 5 is the first fatal militant attack on the Kashmiri Pandit minority in 18 years. A number of Pandits who over the years had returned to the Valley under the prime minister’s rehabilitation package and were working in different government departments, read a dire message in Bindroo’s death. “Remember, in 1990, killing of prominent Kashmiri Pandits led to their migration from the Valley,” says Sanjay Tickoo, president, Kashmiri Pandit Sangresh Samithi, an organisation that fights for the rights of Pandits based in the Valley. “You shouldn’t see Bindroo’s death like any other killing,” Tickoo says.

The autumn evening was deepening into darkness at the high-security Iqbal market, where Bindroo’s shop was located. Most shopkeepers had shut shop and returned home; a few polyclinics were open. The crowds around the clinics and pharmacies were beginning to thin out. Then, suddenly, a young man burst into Bindroo Pharmacy, brandished a handgun, and took aim at Bindroo.

“I was terrified,” says a salesman who has been working at the pharmacy for 10 years. “The gunman took aim, shot him and ran. We all hid behind our desks,” he says. The sound of gunshots created panic; people ran for their lives, taking cover. Bindroo’s murder shocked people, more so as the killing took place in the high-security zone which has both an army camp locally known as “militia” and the headquarters of the Special Operation Group, J&K Police’s counter insurgency force. Social media were full of messages of sympathy and solidarity with the well-loved Bindroo.

At Bindroo’s home in Indira Nagar, his son, Dr Sidharth Bindroo, himself a well-known end­ocrinologist, says his father was a principled man. “Everyone said he was his friend. He was a friend of all,” he says pensively. “I was working outside. It was he who encouraged me to work in the Valley and help people,” he adds. Dr Bindroo says his father had no idea of any threat. “Had he known, he would have still opened his shop—the way he was doing for the past 40 years. He was a brave man.”

Sanjay Tickoo, a close observer of Kashmiri politics and militancy, says he had wanted to discuss the security of Kashmiri Pandits with the Lt. Governor for the past six months. The reason was his sense of something being amiss in the near-complete silence of common Kashmiris after the abrogation of Article 370.

“Before August 5, 2019, even a small incident, especially involving security forces, would lead to protests. After the abrogation, there was deafening silence…it frightened me for the first time in 30 years,” he says. Tickoo was invited for an appointment with Lt Governor Manoj Sinha a day after Bindroo fell to militants’ bullets, but was unable to keep it. 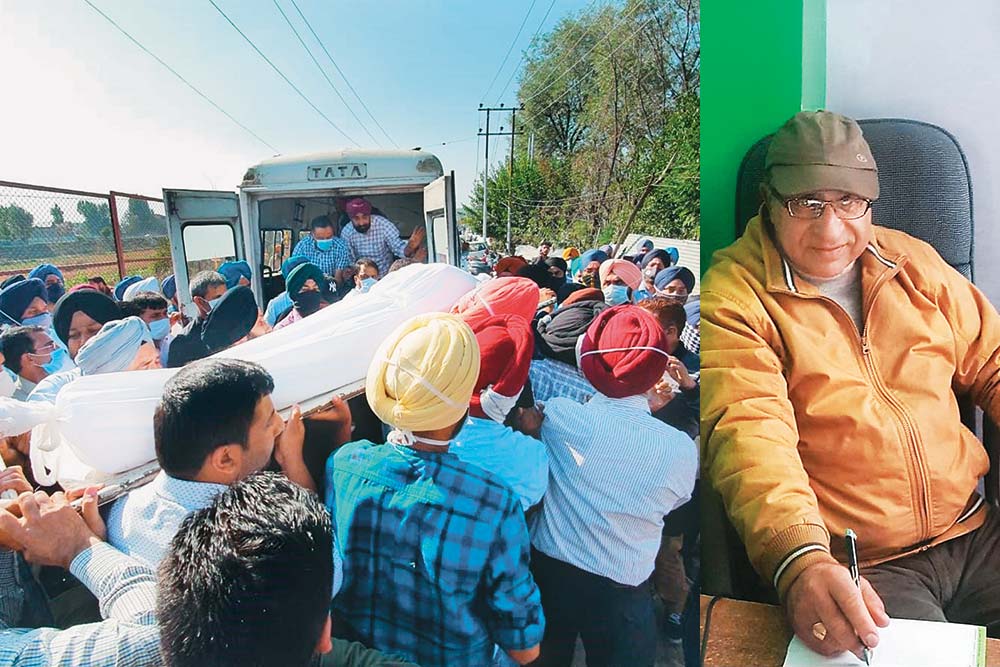 Those Who Fell Left, members of the Sikh community and others carry the body of school principal Supinder Kaur, who was killed by militants on October 7; right, the much-loved M.L. Bindroo, who was also gunned down by militants

Bindroo’s killing signalled a blood-spattered spell—within an hour, a non-local Hindu paanipuri seller from Bihar was shot dead in the Lal Bazar area in the city, followed by the killing of taxi driver, Mohammad Shafi Lone, in northern Kashmir’s Bandipora district.

A day later, when militants shot dead 50-year-old Sikh school principal Supinder Kaur, a mot­her of two, and Kashmiri Pandit teacher Dee­­pak Chand, shock after Bindroo’s demise turned into disbelief. At the Government Boys Higher Secondary School in Srinagar’s Eidgah, the gunmen first isolated the teachers after checking their identity cards, then killed them in cold blood. The spate of targeted killings brought back focus on the mass migration of Kashmiri Hindus in the early ’90s.

“After the revocation of Article 370, I felt there will be a backlash, as there is widespread anger within the majority community. Unfortunately, some of our community members started rejoicing over the revocation, saying we have defeated Kashmiri Muslims who had thrown us out of Kashmir. These things also didn’t go down well,” Tickoo says.

Ahead of the minority killings, there was a different narrative at play in the Valley. In September, the government employed artists to paint roadside walls depicting the scenic beauty of Kashmir to show “how normal Kashmir Valley is”. Since September 12, each day saw Union ministers visit the Valley to ina­ugurate different projects in J&K under the prime minister’s outreach programme. Every day, Lt.Governor Sinha was inaugurating a project or addressing a gathering.

The Peoples Alliance for Gupkar Declaration (PAGD) took a hard line on all this government activity, calling it an answer to a “long-standing demand of the Hindutva elements, with an eye on altering the demographic composition of the only Muslim-majority state in the country, rather like Israel is doing on Palestinian lands”.

However, beneath the steady inflow of tourists and the air of normalcy, killings of civilians went on unabated. In August, militants entered the rented accommodation of BJP leader Ghulam Rasool Dar, sarpanch of Redwani Kulgam at Lal Chowk, Anantnag, and shot dead Dar and his wife Jawahira. In the same month, they killed BJP constituency president Kulgam Javed Ahmad Dar and Apni Party leader Ghulam Hassan Lone at his home.

In June, a bodybuilder, Mehran Ali Sheikh, was shot dead by gunmen outside his home at Bulbul Lanker Nawakadal in Srinagar. Police initially blamed militants for the killing, but later termed it as “gang rivalry”. On October 2, gunmen shot dead two people, Majid Gojri and Muhammad Shafi Dar, in a span of two hours in Srinagar’s Karan Nagar and Batamaloo areas.

The killing of members from the minority community, however, changed everything. In the panic that seized Pandits and other Hindus and Sikhs, Kashmir was confronted with an image of what it was 30 years back—an insecure place for common people.

Several migrant labourers and frightened government employees from the Pandit community fled Kashmir, as The Resistance Front (TRF) claimed the responsibility for the killings, saying Bindroo was furthering Hindu right-wing agenda. The slain teachers, it said, were killed for threatening students with punishment if they didn’t participate in the Independence Day function on August 15, where the Tricolor was hoisted.

The police issued a statement saying that of 28 civilians who have been killed this year, seven are from minority communities, while the rest were Muslims. Needless to say, such facts were cold comfort for Kashmiri Pandits. They say TRF is a local front for the banned Lashkar-e-Toiba militant outfit and was formed after the abrogation of Article 370.

Heightened action from security forces soon followed the murders. On October 6, the CRPF shot and killed a civilian, Pervez Ahmad, in Anantnag in South Kashmir when a vehicle he was traveling in allegedly didn’t stop at a checkpost. Former CM Mehbooba Mufti says the CRPF used disproportionate force. The police and security forces have also detained over 700 people, mostly young boys, in a sweeping crackdown following the attacks on minority members. “These acts are committed by newly recruited terrorists or those who are about to join a militant outfit,” a police statement states.

“While it is true that a majority of civilian deaths in Kashmir have been that of Muslims, it does not absolve us of our responsibility to do everything in our power to help those who belong to religious minorities feel secure,” PAGD spokesman M.Y. Tarigami says, adding that “the onus to create a conducive security environment lies with the government of India”. However, there is a trust deficit between the government and several PAGD constituents.

Even though an uneasy peace—in terms of mass civilian unrest—has held in Kashmir, the running battle between militants and security forces never really died down. Deaths—of militants, security personnel, and civilians killed by militants—have occurred at a steady trickle. The killing of members of the minority communities, and the fear it has triggered, is a hideous new element in the whole mix.