The Congress in Tamil Nadu looks to benefit from a solid alliance, just like it did before in past polls 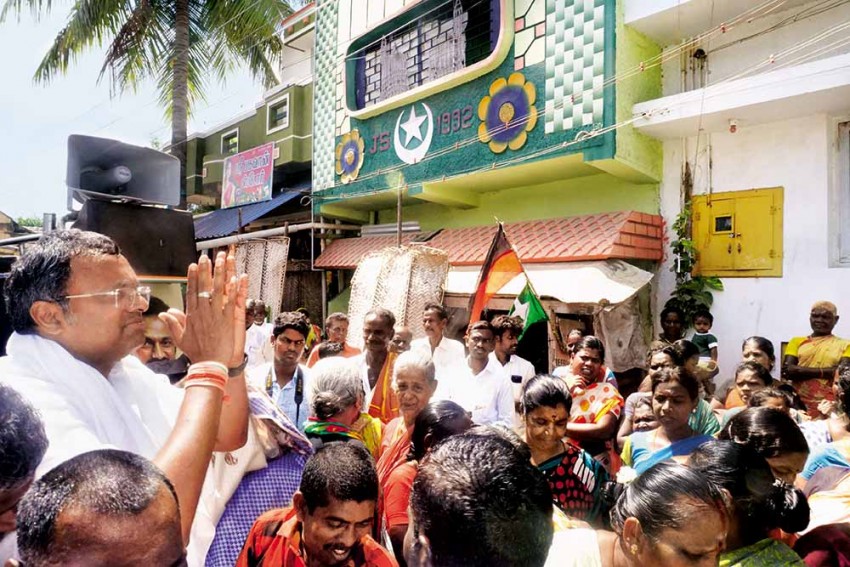 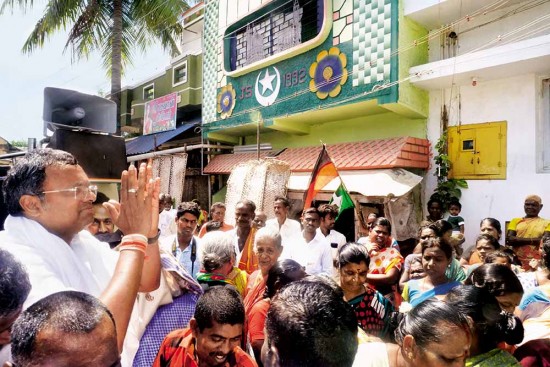 Karti Chidambaram jumps out of the SUV and walks towards the campaign jeep fitted with a hi-tech audio system. The spring in his steps can’t be missed as he climbs into the thick of his campaign speech without any trappings. “This election is for the Lok Sabha to elect a government in Delhi. And you remember what the Congress government under Manmohan Singh did for the poor and farmers. We introduced the 100-day employment scheme (MNREGA). But now you neither get jobs nor money under that scheme. Now we will extend this scheme to 150 days. We gave education loans, but no bank is ready now to give those loans. Similarly, your self-help groups do not get small loans as in the past. If you want all these to resume, you must vote the hand symbol,” Karti reels off breathlessly at Idaikattur village, Sivaganga parliamentary constituency.

There is marked difference between the Karti 2014 and Karti 2019—the man waging his own battle five years ago, bravely defending his father’s territory. This time he is in better company in the form of half-a-dozen allies. He makes it a point to mention all their names, underlining that the DMK leads the front. In Tamil Nadu, the Congress needs to be buttressed by the DMK and smaller parties to remain relevant in the state’s electoral politics. Karti himself is a case in point as he could finish only fourth behind the AIADMK, DMK and the BJP-front in 2014. Even father P. Chidambaram could win seven times only when in alliance with the AIADMK the first three times and the DMK the next four. He lost when he contested alone in 1999.

“Why should I run away from the fact that we will win on the strength of our alliance. Last time when the Congress contested alone this was one of the two Lok Sabha seats where we got more than one lakh seats. Add to that the votes of our allies, the anti-Modi and anti-AIADMK votes and we will win by a huge margin,” says Karti confidently. His campaign vehicle says it more colourfully—sporting flags of the entire DMK-front on the bonnet. 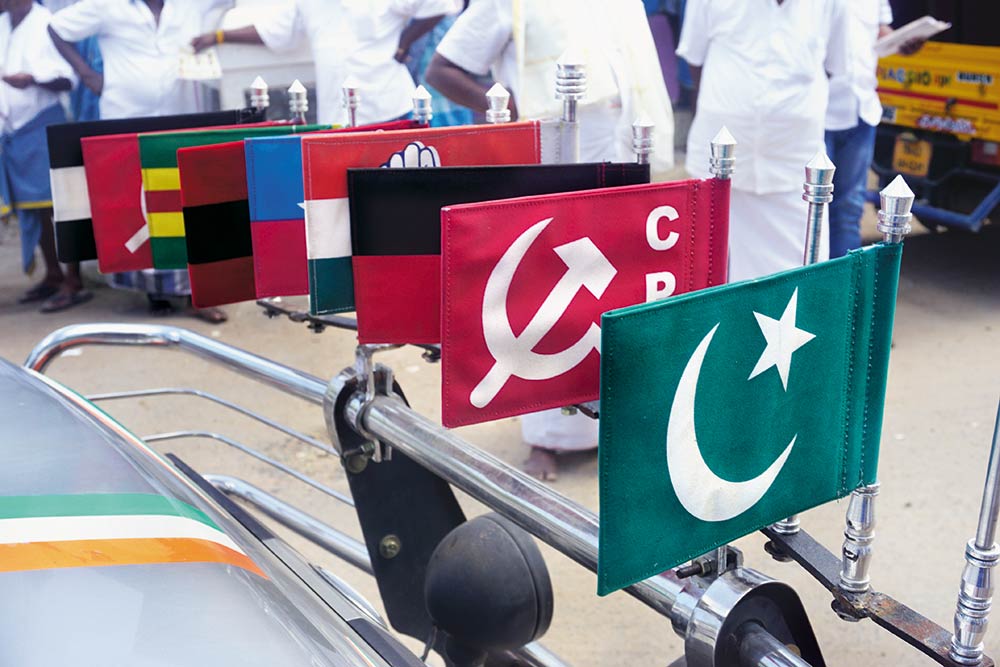 His father’s campaign speeches were peppered with facts and figures and though couched in simple Tamil had a professorial ring to them. Karti prefers the informal approach. When he learns a little girl is named “Sanvika” he wonders what happened to simple Tamil names one could find in the villages.

Out of nowhere he asks what TV serials the women watch and reels out a few names. When many say they watch Sembaruthi, he asks, “Whose side you are on, Padmini or Vanaja?” referring to the two main characters. And then he delivers the hook line. “See, cable TV used to cost Rs 100 a month, now it costs Rs 400. Likewise the prices of petrol, gas and diesel have gone up. Only if we have a simple GST can we bring them down and only the Congress can do that,” Karti tells the crowd.

More than the urge to vote back the Congress, the systematic campaign that the BJP and Modi did not care for Tamil Nadu seems to have taken root in the villages and smaller towns. “If Modi really cared he would have visited the state after the Gaja cyclone. When Tamil Nadu’s farm leaders protested in Delhi for months he never cared to meet them. There was not a word of sympathy over the thirteen people killed in police during the Sterlite protests. The BJP has only silence to these questions from ordinary folks like me,” complains Kamaraj, a farmer in Idaikattur. In contrast, the DMK and Congress leaders had reacted sympathetically, he recalls.

Such optics are not helping H. Raja, the BJP’s motor-mouth fielded against Karti. But Raja prefers to attack PC’s record. “I am also supported by a strong alliance led by the AIADMK which won this seat last time. My only question to the voters here is what Sivaganga has gained by Chi­damabaram’s long innings. I will do better in just five years what he could not do in over 25 years as MP.”

“Congress needs its government in Delhi... since politics ends with DMK and AIADMK in TN. Same applies to the BJP,” says a BJP man.

Of all the Congress candidates in the state, Karti and Jothimani in Karur appear comfortably placed. The other seven are locked in tough battles, but the strength of the alliance may see at least five of them pull through. Former TNCC president E.V.K.S. Elangovan, fighting the son of OPS in Theni, the seat closest to Wayanad, is yet to feel a Rahul Gandhi ripple effect from Kerala. In Tiruchy, former TNCC president Subburaman Thirunavukkarasar has proved to be a sluggish campaigner, turning up late for meetings and expecting the DMK to shoulder his campaign without opening his purse.

Similarly the much-touted NYAY scheme has yet to gather traction among the rural voters. When Karti promised waiver of crop loans, as it was done in 2008, the small crowd of villagers clapped. But hardly anyone reacted when he followed it up with the promise of Rs 6,000 a month in the bank accounts of those the below poverty line under NYAY. It is not a good sign for the Congress that Rahul’s game-changer was yet to percolate to its target group. And the villagers have their own misgivings about such targeted doles.

“The moment they classify it for those below the poverty line, it does not inspire confidence even for a sucide-prone poor farmer like me because only the ‘not so poor’ will wriggle their way into that list. Let the baby be born first before we give it a name,” observes Mohammed Farikh of Idaikattur. In other words, he wants the Congress to come to power first and roll out NYAY, rather than take its promise on face value. The small crowd at the local tea shop agrees that the Congress has to win big on its own to implement a promise like that. “If they are in a coalition do you think other parties would let the Congress walk away with all the credit? They would rather kill the scheme,” says Thiraviam, a farmer.

Karti is confident that once the campaign gains momentum, NYAY will become the buzzword and bring votes. If only the Congress could learn a lesson from the DMK when it painted a TV symbol outside every home when it promised a free TV set to every home ahead of the 2006 assembly elections.

The poor win record of the Congress after grabbing a large chunk of seats in the assembly elections keeps raising doubts about its electoral efficacy. In 2011, of the 63 it contested, the party won just five. It was eight out of 41 in 2016. So, having been allotted nine seats in Tamil Nadu and one in Pondicherry, the Congress has to perform this time. “The Congress badly needs its government in Delhi…Out of power it is out of sight since, in this state, politics ends with the DMK and AIADMK. The same applies for the BJP,” explains a senior BJP leader.