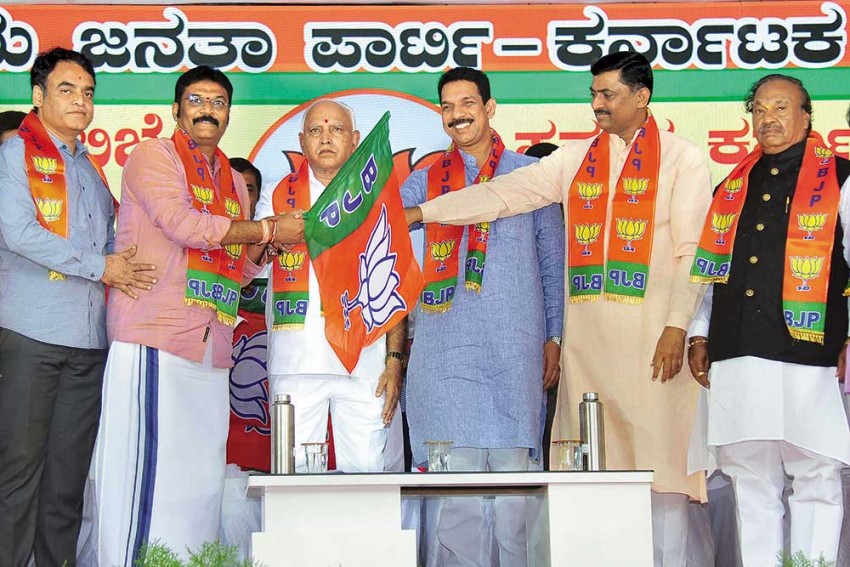 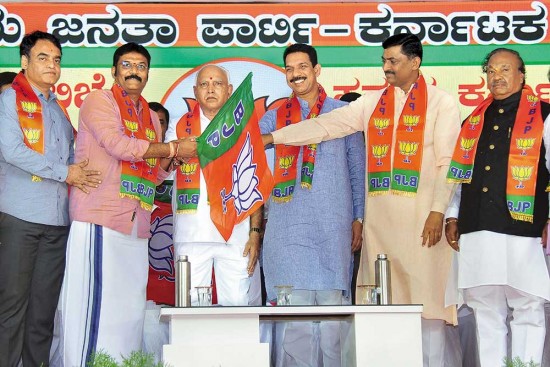 The battlelines are now drawn, or rather redrawn, for the December 5 bypolls to 15 assembly constituencies in Karnataka. Relying on defectors to win these seats, key to keeping the party in power in the state for the next three years, the ruling BJP is going out on a limb. Handing of bypoll tickets to 13 defectors a day after the Supreme Court verdict on them last week has caused resentment among the party’s local leaders—after all, the turncoats may even become ministers if they win. The BJP’s difficulties were evident earlier this month when a leaked audio clip purportedly from a party meeting showed an angry CM B.S. Yediyurappa trying to convince local leaders to back the defectors.

The BJP needs to win eight seats to get a simple majority in Karnataka’s 224-member assembly. It currently has 105 legislators (the Congress has 66 and the JD(S) 34) and is hopeful of winning 10-12 seats. But if it falls short, Karna­taka’s politics will again revert to an uneasy number game between the three major parties. The JD(S), political obser­vers say, will be hoping for such a scenario because that would put the party back in the middle of any power equation. Since the coalition fell, the Congress and JD(S) have parted ways and are fighting the polls independently. Of the 15 constituencies seats going to polls, 12 were previously held by the Congress and 3 by the JD(S).

The BJP needs to win eight of the 15 seats going to bypolls to ­secure a simple majority in the assembly.

The BJP had formed the government in July after the H.D. Kumaraswamy-led JD(S)-Congress coalition was defeated in a trust vote triggered by resignations of 17 ruling party MLAs. They abstained from the vote of confidence amid allegations of horse trading and were disqualified by the speaker. Upholding their disqualification by the then speaker, the court struck down his ruling that it would extend until the end of the current assembly in 2023. This allows them to contest the bypolls. A member disqualified under the Tenth Schedule is barred from being appointed as a minister or from holding any remunerative political post from the date of disqualification until the expiry of his term or re-election to the legislature, whichever is earlier, the apex court bench had concluded.

“By giving tickets to all the disqualified MLAs, the BJP has done what we had been anticipating all along, encouraging defection, horse trading, treachery and public immorality,” says Congress general secretary K.C. Venugopal. The BJP, of course, maintains that it is merely backing candidates who have a chance to win. “They have done work (in their constituencies). Some were ministers in the past. That’s why we have given them tickets,” says BJP spokesman Vaman Acharya.

Among the keen fights, political obs­ervers reckon, will be Hoskote and Athani, where the new entrants face stiff resistance within the BJP. In Hoskote, BJP man Sharath Bachegowda is now standing as an independent against his party’s candidate N. Nagaraju (one of the disqualified legislators, formerly Cong­ress), defying a party threat to expel him. In Kagwad, BJP leader Raju Kage quit the party in protest and is now contesting the bypoll as the Congress candidate. In Gokak, former Congress leader and now BJP candidate Ramesh Jarkiholi is facing his brother Lakhan.

Political analyst Harish Ramaswamy reckons the bypolls will prove crucial for both Yediyurappa and Congress leader Siddaramaiah to retain their hold over their parties. “Yediyurappa has to reiterate that he is the leader, while Siddaramaiah needs to prove to dissidents that he can deliver results,” says Ramaswamy.