Irony In A Crafted Victory And What It Presages

How did ‘Jai Shri Ram’ win? By managing media and by deploying LJP, MIM et al. That helped thwart real solidarities and kept angry Dalit-Muslim votes from drifting to Tejashwi. 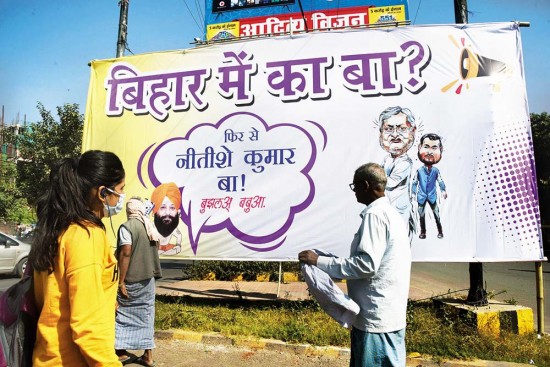 More stories from Pushpendra
View All

Analysing an election in a short article invariably creates a dilemma whether to focus on the contesting parties, issues, electorate response or electioneering. In recent times, the study of electioneering has acquired significance, particularly with the rise of populist politics. Here, I would focus on electioneering (henceforth ref­erred to as election technology)—tools, techniques, art and craft of fighting an election. Election technology includes strategic alliance-building, selecting candidates and star campaigners, keeping in mind social configurations, sloganeering, messaging, posturing, creating hawa (atmosphere), using/managing media, including social media, social engineering, utilising various faultlines in society, recruiting cadres, using election research, using digital technology to manage, even manipulate public mood and decision-making by creating fear, frenzy or by selling dreams. They also bank on creating a real-time feedback mechanism, flexibility in changing gears, and micro-­management up to the booth level. A party can ign­ore the power of election technology at its own peril. In recent times, those having mastery over the technology—election pundits and ‘Chanakya’ leaders—have gained remarkable stature in electoral politics as they have time and again exhibited the capacity to delink a party’s performance from people’s perception about it. They show the potential of manipulating people’s anger, dissatisfaction or expectations. It is not without nothing that elections can be fought on the past while anaesthetising the electorate of the present. Scholars have hinted at highly sophisticated ways of tinkering with the electoral system as part of ever developing election technology.