Our government must follow examples of other countries with liberal views on personal use of drugs.

Pablo Picasso, Ernest Hemingway, Sylvia Plath, James Joyce, Sigmund Freud, Anthony Hopkins, Stephen King, Steve Jobs, Bill Gates, John Lennon, Brad Pitt, Elton John, Oprah Winfrey, Michael Phelps, Diego Maradona, yours truly, and innumerable others have something in common. Yes, you guessed it right. Even Barack Obama, in his 1995 memoir mentions his experiments with marijuana, alcohol, and cocaine at some point in his life. Since last week, news media have been obs­essing over the alleged drug consumption of 23-years old Aryan Khan. He has been booked under the NDPS Act, the cornerstone of India’s regressive drug policies.

Sameer Wankhede, the NCB Mumbai zonal director, our very own James Bond (as the TV media is intent on projecting) has apparently seized a mere 13 gms of cocaine, 21 gms of charas, and 22 pills of MDMA, from the cruise ship where Khan was arrested. Pertaining to this raid, the boastful gestures of the NCB chief on national TV is similar to something like the Chief of Army Staff announcing to the world about catching the thief who stole food from a colleague’s tiffin box. One gets reminded of the notorious British officer, Norman Pilcher, who pinned numerous celebrities, like the members of Rolling Stones and Beatles, on charges of possessing drugs. Pilcher employed deceitful means to carry out raids and frame them on drug charges for satisfying tabloid news, which he admitted in his memoir. On October 18, 1968, wearing a postman’s hat, Pilcher crashed into the Marylebone flat of John Lennon and Yoko and discovered that “they were stark naked!”.

Pilcher eventually got charged for fabricating police diary entries and was jailed for four years. After being hounded by drug law enforcement agencies in July 1967, the Beatles published a full-page advertisement in The Times, signed by sixty-four members of the British civil society, to propose the decriminalisation and legalisation of marijuana. Within a week, questions were being asked in the House of Commons, prompting a raging public debate. Henceforth, there has been a sea-change in drug policies across the world. 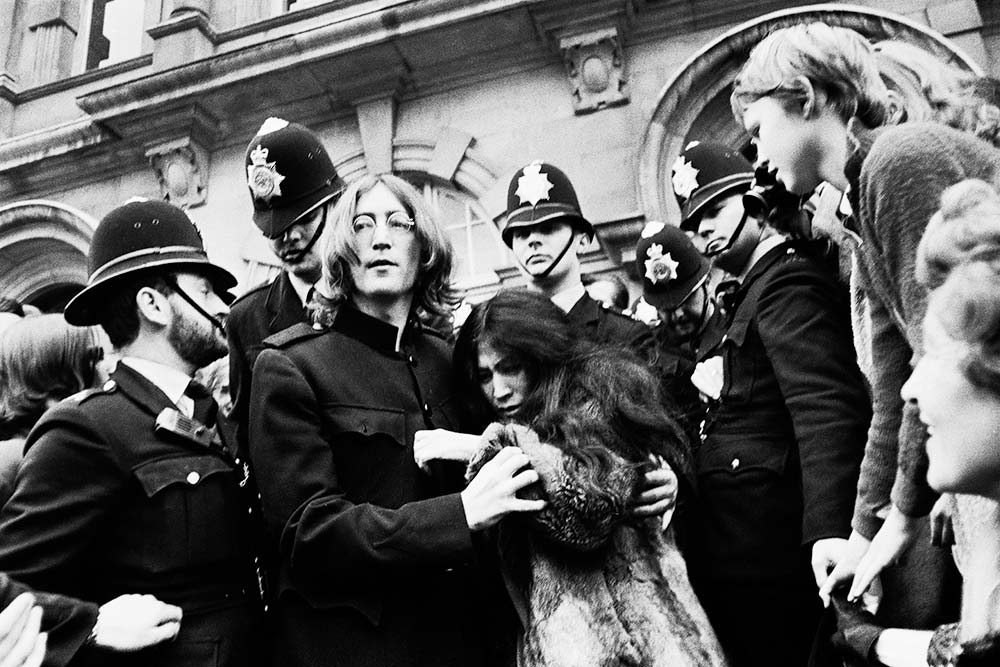 In ancient Indian medicine, written between the 3rd and 8th centuries BCE, Sushruta Samhita prescribes cannabis as a cure for phlegm, catarrh, and diarrhoea. In Atharva Veda, cannabis is one of the five most sacred plants on earth, referring to it as a source of happiness and liberation. During the churning of the ocean, when Shiva was in torment after ingesting the churned-out poison, Parvati offered him bhang to alleviate his pain. During Kali Puja in Bengal, the deity has to be offered cannabis and liquor among other things. In Sikhism, the Nihang warrior community uses cannabis. Islam does not prohibit the consumption of cannabis in any form.

Following the US’s hardline ‘war on drugs’ policy, the NDPS Act went through a series of amendments in 1989 to formulate stricter laws against drug abuse and trafficking. This included mandatory 10 years of imprisonment and even death sentence for repeat offenders. As legal commentators have pointed out, India’s NDPS Act adopts more severe measures for drug control than those provided by the UN Drug Control Conventions in 1961. Slowly, our morality and des­ire were manufactured so that drinking alcohol was socially accepted, but smoking ganja was not. In the film Don, Amitabh Bachchan played a double role, the first one who is modern and suave, drinks fancy foreign liquor while the second one who is culturally backward drinks bhang. This is the fundamental moral position of the Indian State which dictates its national drug policy. Both are intoxicants but they are looked at differently in the eyes of law.

Tens of thousands were jailed in the US and they spent billions of dollars in the drug war, res­ulting in no impact on the supply-demand curve, rather it increased over the years. In November 2020, Oregon became the first state in the US to decriminalise personal use and possession of all drugs. Portugal was the first country to decriminalise the possession of all drugs for personal use in 2001. In June 2019, the Malaysian government proposed decriminalising drug use, putting “science and public health before punishment and incarceration”. 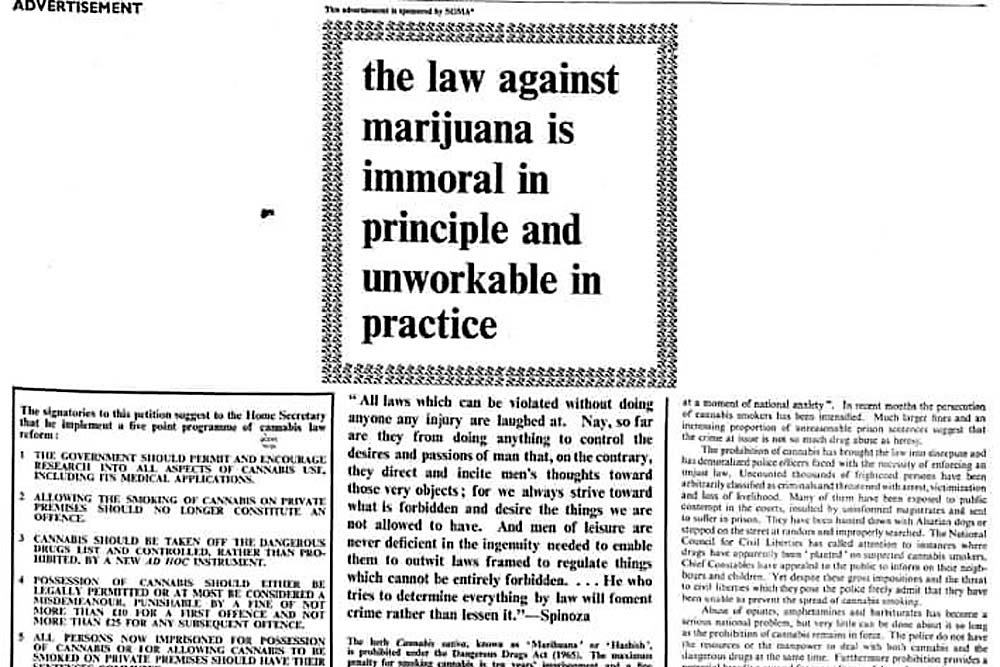 A full-page ad published by the Beatles in The Times

India can become a leading figure in Asia in rev­amping drug policies. Already, in 2018, SADA (Sikkim Anti-Drugs Act) was amended by discarding criminal or administrative penalties for drug use. A 2019 report published by the ministry of social justice and empowerment addresses the State to take necessary steps for minimising stigma and discrimination around drug addiction and provide health and welfare services to people affected by substance use rather than subjecting them to the criminal justice system.

The only section in the 50-page NDPS Act which deals with consumption is Section 27, for which the maximum imprisonment is up to one year. Aryan Khan is currently booked under it, among other sections. Technically, it has no real meaning bec­ause anyone opting for treatment can get immunity under Section 64A of the same act. This section provides immunity not only for consumption but also for offences involving small amounts of drugs. According to a study in the Lancet in 2010, alcohol has been deemed more harmful than heroin and crack when the overall dangers to the individual and the society were considered. Not to mention that it is still unlawful to drink alcohol in many states, including Mumbai, according to the Bombay Prohibition Act, 1949.

A substance being sold over the counter in one part of the world can get someone killed or imp­risoned for life in another part. This is probably the biggest contradiction of modernity. The des­ire of human beings to alter their consciousness is as primal as their desire for food and sex. For the last 50,000 years, we have been voluntarily getting intoxicated by different varieties of substances. No person in civil society should be put behind bars for what they put into their body. The future of drugs is simply better drugs, not incarceration or death penalty or ostracisation by society. It is too much to ask in the present scenario but drug policies must be grounded in a scientific spirit, compassion, health, and human rights, not prejudice or moral standpoint.

(This appeared in the print edition as "Weed Them Out")

Ronny Sen is a Calcutta-based photographer and filmmaker. his debut film Cat Sticks won a jury award at the Slamdance Film Festival, 2019

Five Movies That Bring SS Rajamouli's Magic To The Screen