In Quest For Citizenship, Assam Braves Rampaging Floodwaters With Hope And A Prayer

In a bid to prove their Indian citizenship, families in Assam, ravaged by floods, are dearly holding onto certain documents to prove their genuineness 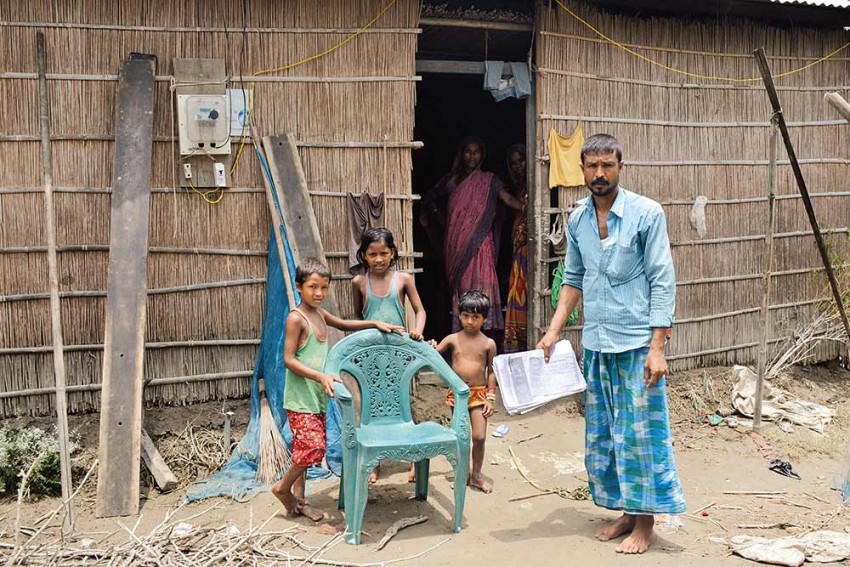 Flood Of Emotions
Habibur Rahman holds on to a sheaf of land documents that could earn his family a place in the NRC
Photograph by Surajit Sharma
Abdul Gani July 24, 2019 00:00 IST In Quest For Citizenship, Assam Braves Rampaging Floodwaters With Hope And A Prayer 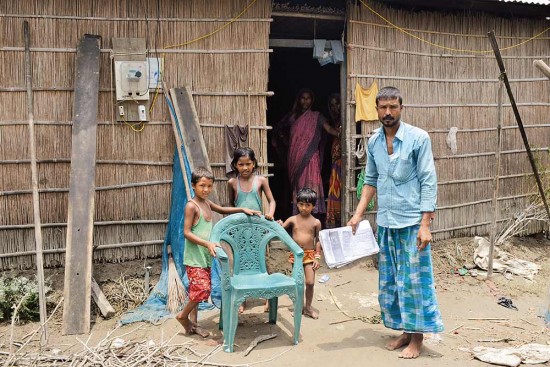 As floodwaters swirled around him in mid-July, Habibur Rahman and his family of six  scrambled to save their bel­ongings in Assam’s Alikakh char, a sand bar on the Brahmaputra about 70km from state capital Guwahati. Their main worry was a few pieces of documents—brownish, the edges slightly frayed. Rahman wrapped them tightly in plastic to keep the paper dry, in case the water rose further. These pap­ers—land documents in the name of his father and grandfather—will det­ermine his fate and that of his family in a few weeks from now when the much-awaited and upd­ated national register of citizens (NRC) is published.

This Tuesday, the Supreme Court ext­ended the deadline for publication of the final NRC till August 31, but that is unlikely to provide any succour to people like the Rahmans— wife Aklima Khatun and sons Nur Alam, seven, and Faridul, five—who found their names struck off the citizenship document last year. Ironically, the names of their two daughters—Samira Begum, 14, and Shahida Khatun, 11—have been inc­luded. The procedural flaws have bro­ught the NRC update under the scanner but officials maintain that all “genuine Indian citizens” will be included.

Last year, an estimated 40 lakh people out of 3.29 crore applicants were left out of the final NRC draft. A second list published on June 26 this year saw the names of another 1.02 lakh people off the roster for allegedly failing to prove their citizenship. The Rahmans have filed petitions reclaiming their Indian citizenship, resubmitted documents and attended as many as six hearings at different NRC centres in different districts. It may not be enough yet for the family. “Now, it’s only hope. We are just hoping and praying that our names are included in the list,” Habibur, 39, tells Outlook in his one-room house. “Floods have damaged our house partly...and now the biggest tension is the NRC,” he adds. Another daughter, now three, was born after the NRC process started.

Across Assam, where vast swathes of land are facing the annual scourge of heavy flooding, there are many like Rahman battling nature’s fury with NRC on their minds. There are mixed feelings over the mammoth exercise, first envisaged in the 1985 Assam Accord that marked the culmination of the six-year-long anti-foreigner movement in the state. 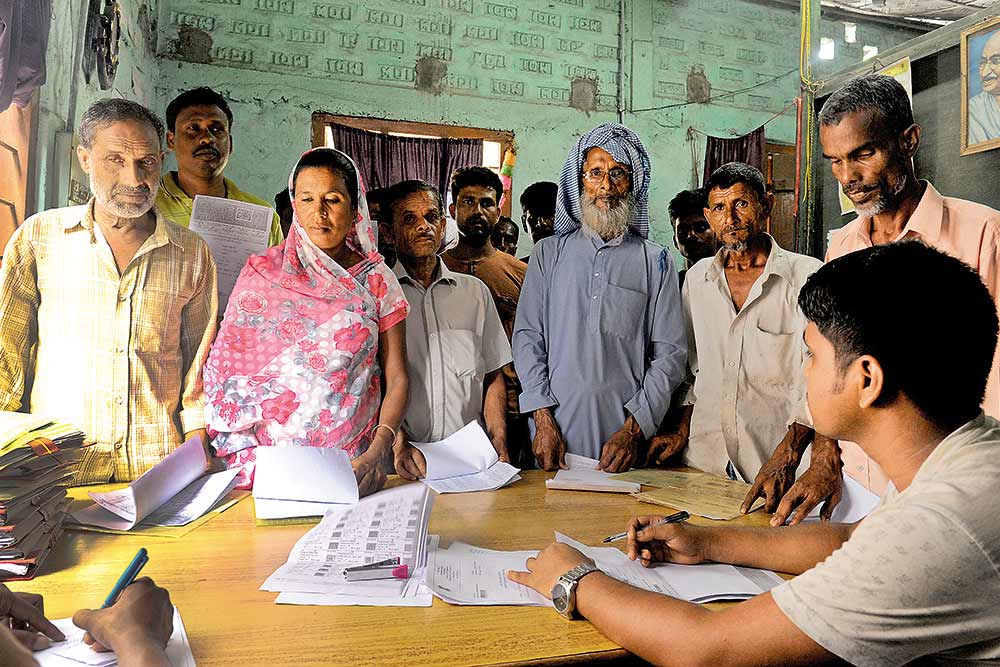 People at an NGO-run NRC help-desk.

Human rights activists and opposition parties see the NRC update as an alleged attempt by the BJP-led government at the Centre and the state to target the Muslim community. The government says the exercise will help it identify und­­­o­­cumented migrants and facilitate their possible deportation later.

While extending the deadline by a month, the top court, however, turned down “fervent” pleas by both the Centre and state for “sample reverification” of some names inc­luded in and excluded from the draft NRC. The petitions said that sample reverification had become necessary to quell “growing perception” that lakhs of “illegal immigrants” may have infiltrated the list, especially in districts bordering Bangladesh. Rights activists had earlier expressed apprehension that the plea for “reverification” was aimed at systematically striking out names of Muslims.

For many in the state, however, the NRC is the “best available means” to end a longstanding impasse over ill­egal migration, especially from Bangladesh, an issue that had dominated headlines in Assam for decades and div­ided society along religious and linguistic lines. Rajibul Islam, a businessman from Barpeta, for one, is hopeful that the final NRC draft will end the harassment and racial taunts his community members have faced for long. “Many a time, bec­ause of the dress we wear or the beards some keep, we had to face derogatory rem­arks. Many would abuse us as Bangladeshi or Miya. I hope once the final NRC list is published, we can live here with dignity,” says Islam, whose family has been inc­luded in the draft NRC.

After the NRC is published, the people who do not find their names on the list will have the option of approaching a foreigners tribunal—a quasi-judicial agency exclusive to Assam—the high court and finally the Supreme Court to prove their citizenship. Though the Centre has maintained that the “illegal immigrants” have to leave India, it is still unclear how or where the government will deport these people. Bangla­desh denies any “large-scale migration” to India.

As of now, Assam has six detention centres which are home to around 1,000 people who have been declared illegal citizens by the courts, besides some Bangladeshi and Myanmarese nationals who have been arrested for entering India without valid travel documents or for overstaying the visa.

For many, the NRC is the “best available means” to end a longstanding impasse over illegal immigration, especially from Bangladesh

Some people, who are waiting for the final date of publication of the NRC list, fear that they will be sent to a detention centre.  For Sakila Khatun, whose name along with her two sons is missing from the draft NRC, the only hope in her life is to see their names on the final list. “I have no dream, I don’t need anything…just that our names are in the list...then I will be the happiest person,” Sakila says. “We are uneducated and poor people, so everyone tries to take advantage of our helplessness. I was told that my name was tagged as D (doubtful) so I will not be able to get a health card. But I have no regret. I don’t need anything but the names on the list,” she adds. Sakila says advocates and other government officials would ask for money every time they go for some work.

“We can’t meet their demands. Even an affidavit costs around Rs 5,000. So, we need to send our kids to work in Guwahati or other places so that they can earn some money and pay for these expenses,” she says, adding that son Shahadat Ali, who is barely 15, is working in a construction site in the state’s capital city .

The Bharatiya Gorkha Parisangha, an association representing the Nepalese community, suggested that the home ministry and Election Commission should adopt a mechanism to solve the doubtful voters’ issue for a fair NRC. The national secretary of the org­anisation, Nanda Kirati Dewan, says that Manju Devi, the great granddaughter of freedom figh­ter Chabilal Upadhyay, the foun­der of the Congress in Assam, has also been left out from the NRC draft despite having proven her parental lineage. “She was told during the last draft that she had been marked D in 2005 so her NRC claim has been rej­ected along with her sons and daughters,” he says, adding that even the name of Sahitya Akademi awardee and president of Assam Nepali Sahitya Sabha, Durga Khatiwada, was struck off the NRC draft last month. “Khatiwada holds the 1951 NRC of his father as legacy. Although all his family members’ names have been included, he himself is surprised about his exclusion. These are the issues which needed proper att­ention,” says Nanda.

Back in Alikakh char, Habibur and his family members are now perched on an embankment after floodwaters submerged everything around them from the second week of July. When they were darting from their house to a temporary flood shelter, it’s the official documents which were the first to be packed. “We try to keep these safe. See, even after having these papers and documents we have been kept out of the list. Can you imagine what would have been our plight without these papers?” asks Habibur, a farm hand.

For many in Assam, a few pieces of paper are worth their weight in gold. Like priceless family heirloom that can never be parted with.

By Abdul Gani in Chhaygaon (Kamrup)