Home  »  Magazine  »  National  » Gender Benders »  In Not So Liberal India, How Drag Kings Durga And Bidisha Are Giving Sexuality A New Shakti

In Not So Liberal India, How Drag Kings Durga And Bidisha Are Giving Sexuality A New Shakti 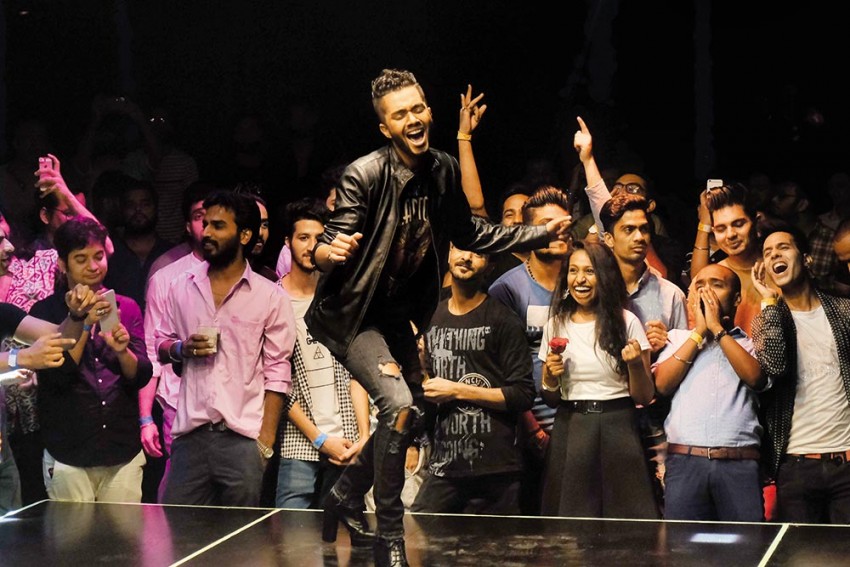 Drag King
Durga aka Shakti on stage
Photograph by Sahiba Chawdhary
Lachmi Deb Roy August 15, 2019 00:00 IST In Not So Liberal India, How Drag Kings Durga And Bidisha Are Giving Sexuality A New Shakti 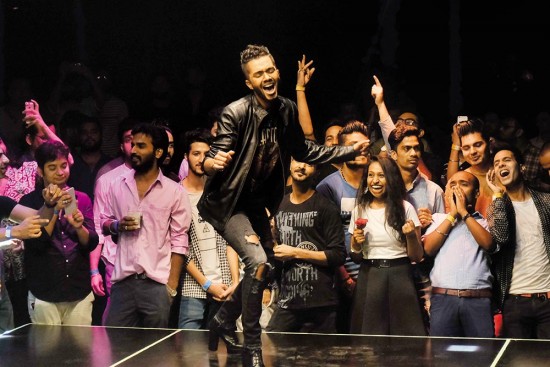 In a disarmingly simple way, Shakti and Badshah are a blurred line between man and woman. They are both combined—a juddering reminder for many of us in our closed soc­iety of the whys and wherefores of the new gender spectrum. And because of them, it’s suddenly fashionable to be gender fluid—to be non-binary, to be androgynous, to be KINGS when they are destined anatomically to be QUEENS. Yes, they are DRAG KINGS—perf­orming onstage in men’s clothing and dismantling stereotypes that make us think of queens when drag culture pops up in conversations.

Ah, if someone could tell Durga Gawde aka Shakti and Bidisha Mohanta aka Badshah were women!

Sculptor Durga was in kindergarten when the young mind tried to fathom why restrooms for shorts and skirts are different. “Doesn’t everybody just have to pee? What’s the difference?” A friend replied: “It is because some people have a pipe and some a hole.” Durga understood the shift early on and as time passed, the ‘he’ and ‘she’ got replaced with ‘they’—Durga, a beautiful woman, and Shakti, a handsome man, residing in the same body.

A day in the life of Badshah is all about channelling the king within her, performing like there is no tom­orrow, winning hearts. It’s like looking at a silhouette—the shape or general outline of the body; good symmetry, relatively wide shoulders, a small waist-hip structure. Bidisha aka Badshah is a singer and finalist at India’s Got Talent Season 8. Being drag was not something she decided to—it came to her naturally. Unapologetically queer, Bidisha has always been open about her sexuality. For her, being a drag king complemented an ever-evolving persona. “I came across a YouTube video in which Landon Cider was transforming women into drag kings and that’s how I realised I could do it too.” 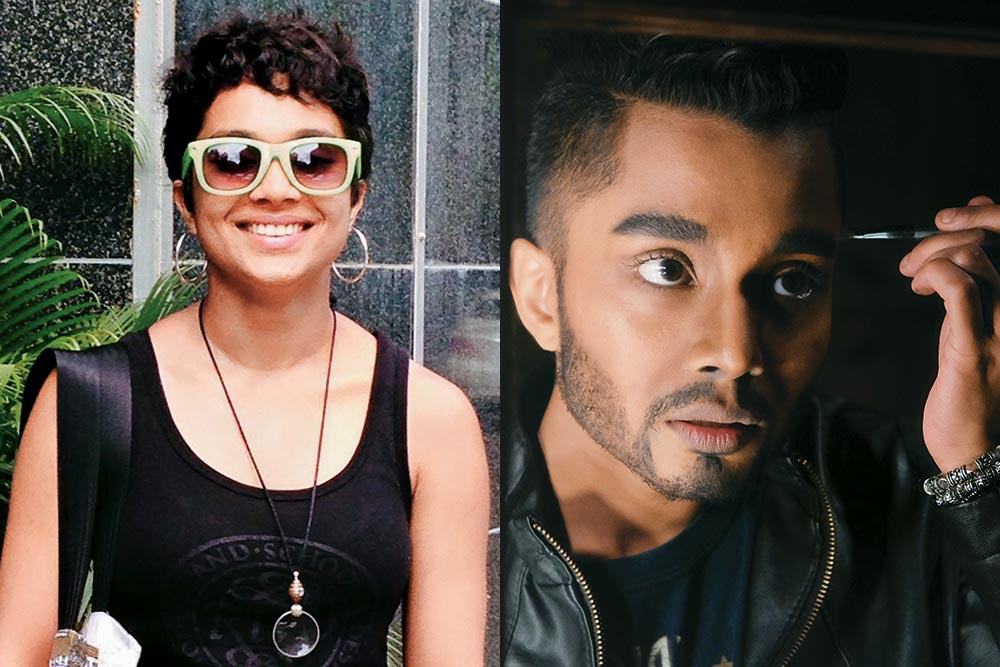 Durga aka Shakti without and with make-up.

Bidisha resists when asked if she leads a double life. “It’s just one. Being a drag king is an extension of my identity as a performer. To perform is a challenge. Kitty Su is probably the sole venue that encourages drag artistes and this art. My first performance was in this club and I have performed in Kitty Sus across India since then.”

Durga’s story is as bendy as ‘her’ sexuality. The only daughter of artiste parents, Durga had an unconventional upbringing. Durga, the kid, travelled with her itinerant parents around the world for shows and met people, some of them hugely eccentric. “When I was about 16, my dad was at the Venice Biennale. There was an artiste called Nikhil Chopra. I remember watching him transform  from a hairy Indian man to a woman”—the youngster’s first awestruck exposure to drag culture.

At university, Durga spent time with transpeople—“long talks about their dysphoria. But I had no basis to understand exactly what my gender is”. And then, Durga discovered Rupaul’s Drag Race that celebrated and portrayed queer people as smart and intelligent, and promoted the drag art. One discovery led to another and a friend told Durga about Ruby Rose, an Australian actor whose raw video called BreakFree was an edifying. “I watched the video…It was like my story. I res­earched about gender fluidity before I came out. It took me a while to articulate it because there was no going back once you come out.”

Durga is living a unique experience that allows the male and female aspects “within me” to evolve.

Durga is living a unique human experience, where “I am not just able to feel masculinity and femininity within me and I can see it evolving and I evolve with it”. They believe the world gets better when you come out, breaking the chokehold of male chauvinism in a society that encourages straight-cut men to do a quick inventory of curses to hurl at queers. And where even the educated regard gender issues with negative adjectives. Encouraged by Ruby Rose’s video, Durga morphed into a drag king after watching drag queen Alaska ThunderF**ks 5000. Durga wasn’t aware then of a thriving drag culture in subterranean India. “An opportunity to meet Alaska and other Indian drag queens backstage changed all that. I was introduced to Sushant Divgirkar aka Rani-ko-he-nur.”

Sushant, like “my drag mom”, introduced Durga to this world. The newbie chose Shakti as her stage name—a gender-neutral form of Durga. In the green room, the defeminizing of Durga is carefully crafted. The breasts are bound tightly to the chest; the bra cups placed on the shoulders to accentuate a manly upper back; make- up creates abdominal muscles and a male chest. The man-facing is complete with stick-on faux hair for beard and moustache. But isn’t that as simple as cross-dressing? Well, Bidisha believes the art-form should not be overlooked because of the facade. 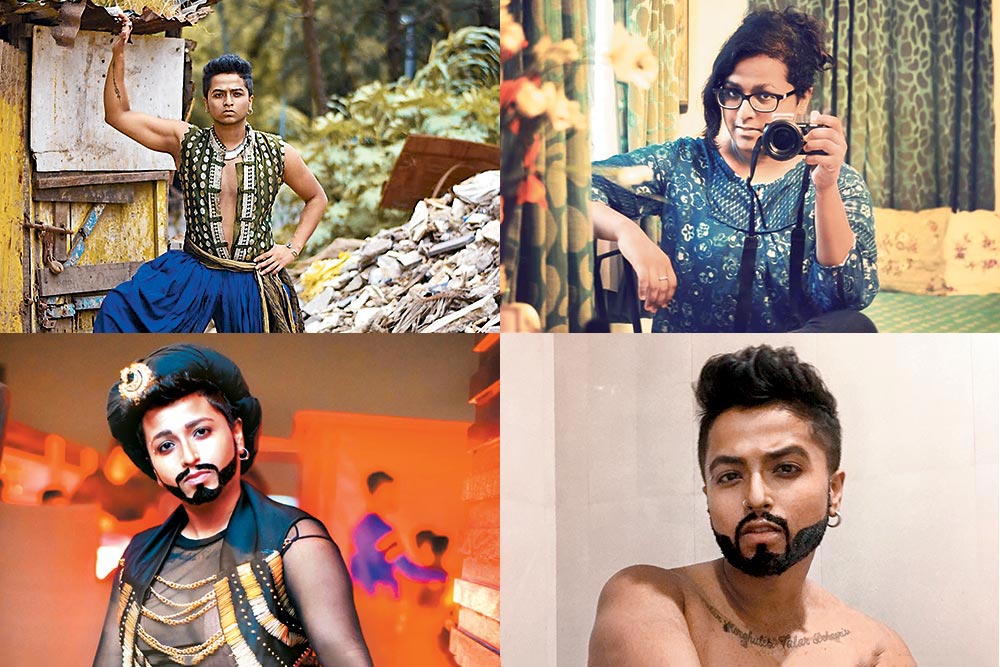 Bidisha aka Badshah is a man trapped in a woman’s body.

The queer world is often derided with expressions: ew, yuck and don’t. These random words sum up the stereotype associated with homosexuality in India, where it has been a crime under an archaic British law until the Supreme Court overturned it.  Still, the stigma and taboo continue. Drag performers often get death and gang-rape threats. But they find a way out, make peace and engage in a form of self-expression that ventilates their eccentricities. “I am not hurting anybody, but what can I do if my existence makes people uncomfortable. All this discomfort comes from the basic fear of the unknown,” Durga says. Their families find it hard to accept their ‘seismic shift’. Durga surmises the situation: “How do I tell I want to bind my tits and put on a moustache and beard, dance on stage?”

For its part, ancient and medieval India had been vastly open about transgender issues—like Shik­handi, born Shikhandini, a girl, in the Mahabharata. Drag performances were commonplace, but those were queens enacting mythological stories, plays, folk art. Drag reached exclusive clubs lately; still, the general populace—encumbered with Victorian mores—view gender benders with suspicion, anger and hatred. “People don’t know where to place me, I don’t know where to place myself,” Durga explains. It didn’t take long for Durga to realise “gender is in the brain, not between the legs”, although the discomfort of dealing with this split personality was intrinsic to the growing-up experience. “I’m not a man, woman or tra­n­sgender, I am gender fluid.” What? Durga points to a  water bottle: “My body is like that bottle. I have a female body, but my gender is like the water in the bottle. The water changes, the bottle is constant. The exp­erience constantly shifts and changes.”