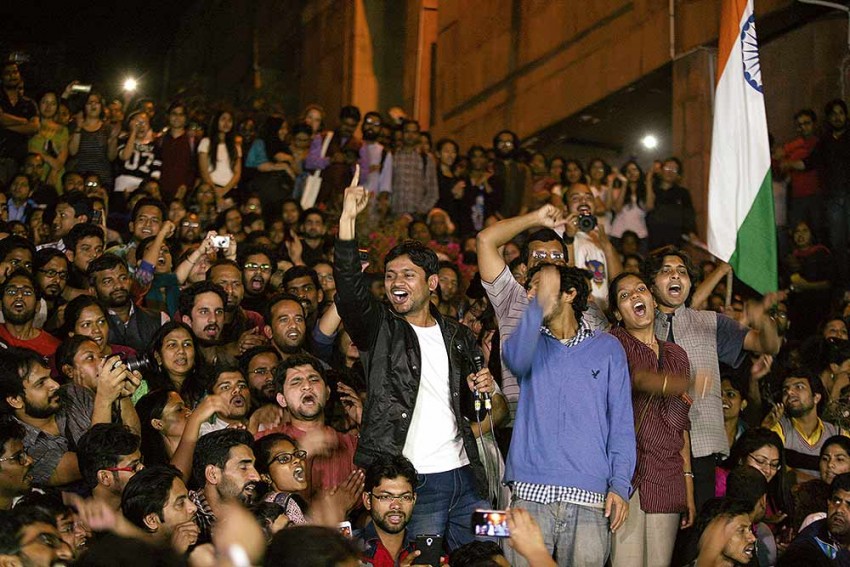 Jayshree Bajoria February 14, 2019 00:00 IST There Is No Democracy Without Dissent

On February 2, the Maharashtra police arrested activist and academic Anand Teltumbde at the Mumbai airport in spite of the Supreme Court’s January 14 order granting him four weeks to apply for anticipatory bail. The police allege Teltumbde incited caste-based violence on January 1 at Bhima-Koregaon and neighboring villages in the state. Describing the arrest as “humiliating”, Teltumbde said, “The State does not have anything against me in particular. It is against the whole idea of dissent. It is me today. It can be anyone else tomorrow.”

Hours after the arrest, a lower court in Pune ordered his imm­ediate release, calling the arrest “illegal” and in contempt of court. The police action against Teltumbde was only the latest move in a sustained effort to use India’s draconian laws to harass and punish defenders of democratic rights and opp­onents of the government. People exercising their rights to freedom of expression and peaceful assembly have been slapped with statutes such as the sedition law, the “counter-terrorist” Unlawful Activities (Prevention) Act (UAPA)and the preventive-detention National Security Act (NSA). Those who criticise the authorities are also frequently targeted by elected officials, pro-government media and social media trolls.

Before Teltumbde, the Maharashtra police had arrested nine civil rights activists, lawyers and writers last year in connection with the same case and accused them of being members of the outlawed CPI(Maoist). Legal procedures were violated in some of the arrests. A fact-finding committee headed by Pune’s deputy mayor found that the violence at and around Bhima-Koregaon was planned by Hindu extremist groups, but the police targeted the activists due to pressure from the state government to protect the perpetrators.

The government has also engaged in retaliatory legal ­act­ions against activists who discuss India’s human rights abuses at international forums. Laws such as the Foreign Contribution (Regulation) Act are used to shut down ­foreign funding for civil society organisations critical of the ­aut­horities. India deservedly earned a place alongside 37 other countries, including Russia, China and Saudi Arabia, in the annual United Nations report documenting reprisals against civil society.

On January 10, authorities in Assam charged writer Hiren Gohain and two others with sedition for criticising the citizenship amendment bill at a rally. Sedition charges are pending against former JNU students, including student leaders Kanhaiya Kumar, Umar Khalid and Anirban Bhattacharya, for allegedly shouting anti-national slogans at a campus event on February 9, 2016, marking the hanging of Afzal Guru three years earlier on that day. As in other cases, the police failed to follow Supreme Court regulations on the sedition charge. The court has repeatedly said incitement to violence is a necessary element for the sedition law to be applied, and yet the police used it in the JNU case despite no evidence of incitement. They took three years to come up with a chargesheet. That’s routine in sedition cases as the authorities know the charges rarely stick in court.

National Crime Records Bureau data from 2014 to 2016 show 179 sedition arrests, but no chargesheet had been filed by the end of 2016 in over 70 per cent of the cases, and only two of the accused had been convicted. As Human Rights Watch and others have documented, the very process of investigation and prosecution becomes the punishment. So is that the factor tempting the police to bring in the sedition charge?

In November, Manipur authorities arrested TV journalist Kishorechandra Wangkhem under the sedition law for posting videos criticising the CM and the BJP government at the Centre. Releasing him on bail, the court said it was “mere expression of opinion”. And then the authorities re-arrested him under the NSA, which allows detention without charge for up to a year, in violation of the right to due process.

When asked tough questions on freedom of speech and assembly during their travels abroad, Indian leaders and officials often cite India’s diverse and vocal civil society as proof of the strength of our democracy. At home, however, the government systematically uses all available tools to crush dissent.

The government should repeal the sedition law, review and amend the repressive provisions of the UAPA, cease the use of the NSA to target its opponents and rights defenders, ­release the activists arrested in the Bhima-Koregaon case, and drop all charges against those engaged in peaceful dissent. There is no democracy without dissent.

‘Any Criticism Is Wormwood’