'I Blame Politicians For Failing To Educate Society To Rise Above Religion': Taslima Nasrin On CAB

In an interview with Outlook, Bangladeshi writer Taslima Nasrin, exiled in India since 2004, shares her apprehensions about the Citizenship (Amendment) Bill. 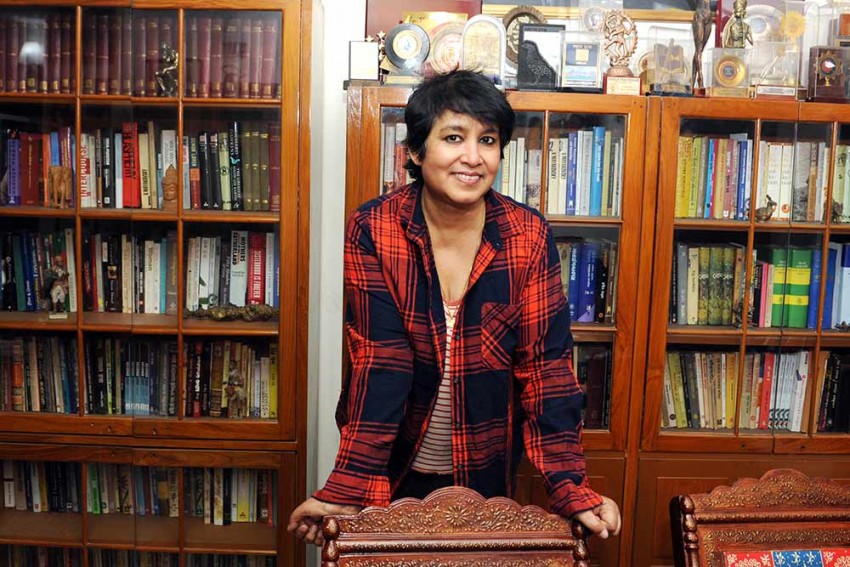 In an interview with Outlook’s Preetha Nair, Bangladeshi writer Taslima Nasrin, exiled in India since 2004, shares her apprehensions about the Citizenship (Amendment) Bill. Excerpts:

As an exiled Bangladeshi aut­hor living in India for the past 15 years, how do you perceive the Citizenship (Amendment) Bill (CAB), which grants citizenship to non-Muslim minorities?

I have criticised CAB. Since prehistoric times, people have migrated for a better life. Indians have moved to Europe and America. Instead of being deported, they were accepted. Should India follow countries like Saudi Arabia, who don’t bel­ieve in human rights, or Europe and the US?

Critics of CAB say it is anti-­constitutional and that religion cannot be made a condition of citizenship….

I fear that this move may tarnish the image of India. India has accepted many foreign, persecuted people. We love India and are proud of it as the best example of democracy, liberalism and refuge for the persecuted in the subcontinent. Many liberal Muslims are getting killed in Bangladesh. India should give citizenship to them.

Do you think you will face a problem if CAB becomes operational?

Yes, anytime. I live on a resident permit, which is rene­wed on a yearly basis. If they throw me out, I will be sad and disappointed. But I won’t be shocked. Bangla­desh threw me out…I only talked about human rights. I was thrown out of Calcutta for no reason. In 2008, I was kicked out of India till 2011. It’s not new for me.

There’s the view that by CAB, the government wants to appease the Hindu community in Assam who were left out in NRC?

I have criticised NRC too. I think India should accept Rohingyas. I shudder to think that people living for decades have to show documents. If they fail, they get deported. Deported to where? Will they be int­erned in camps? Like concentration camps?

You think India is becoming a fascist nation?

I love this country. I never think it can be fascist. I think India should keep its liberal traditions alive. It’s understandable why Muslims leave their country and live here. It’s a better country to live.

Bangladesh saw the worst riots in 1992 after the Babri Masjid demolition. You had to flee after you wrote a novel on anti-Hindu riots. Does CAB amount to settling a score?

The cracks of Partition are still deep. In Lajja, I combined fact and fiction. Attacks on Hindus happen on a daily basis. Many Hindus leave Bangladesh because they feel insecure. I blame politicians for failing to educate society to rise above religion.

Will CAB lead to Hindus being targeted in Bangladesh?

They don’t need any big reason to attack Hindus. It’s the poor who bear the brunt. Affluent Hindus or those linked with political parties will never leave Bangladesh.

The Muslim community says they feel insecure in India….

Vile cases such as lynchings are because of hatred, often created by perceived favours to Muslims by political parties. India’s secular laws and Constitution must be strictly enforced.

Your resident permit was extended after you tagged the Union home minister on Twitter. Do you share a cordial relationship with the government?

I am settled here since 2004. I got worried when I was given two months visa Instead of one year. That’s why I tagged Mr Shah on Twitter. I write in Bengali and I want to live in Calcutta. But the CPI(M) government threw me out. Mamata Banerjee is following their path. She never res­ponded to my letters.

Do you still want to go back to Bangladesh?

I would be killed if I go there. But the government won’t let me enter the country.