A border that runs from the Himalayas to the Thar. A company commander who fought the Battle of Chhamb recalls the epic in hindsight. 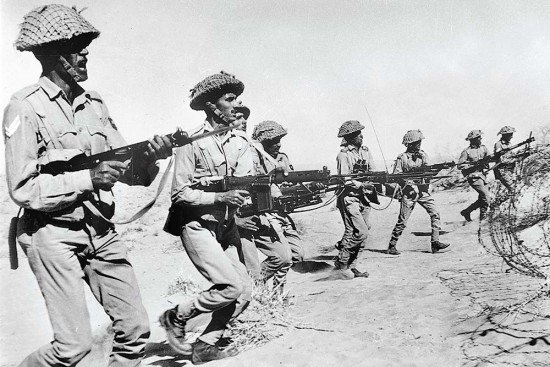 The terrain on the western front is diverse—ranging from mountains and plains to deserts. It is divided into the northern and southern sectors. Jammu and Kashmir was the responsibility of the 15 Corps, Thakurpur-Pathankot-Samba was with 1 Corps, and 11 Corps was res­ponsible for the defence of Punjab and Ganganagar district of Rajasthan. The Bikaner and Kutch sectors had both regular infantry and Border Security Force with little armour or artillery support.

The war was initiated by Pakistan in the Western Sector by pre-emptive air strikes on ten of India’s air bases. Pakistan wanted to open a front along the India-West Pakistan border to capture maximum territory in Jammu and Kashmir, Punjab, and Rajasthan through these pre-emptive strikes. The captured territory was to be used as a bargaining chip in the neg­otiations after an anticipated ceasefire—it was exp­ected that there was bound to be a ceasefire forced upon by the international community. In East Pakistan, they adopted a holding role by strengthening their forces to stall any major Indian thrust into East Pakistan, long enough for the UN and other countries to intervene and force a cessation of hostilities.

India envisaged a holding role in the west and main ope­rations on the eastern front. However, to offset certain Indian vulnerabilities, such as communication lines between Jammu and Pathankot and infiltration channels into the Valley, limited offensives were also planned in Punjab, Pakistan-occupied-Kashmir, Shakargarh Bulge, Chicken’s Neck etc. India’s posture was basically offensive-def­ence with the aim ‘to counter, as decisively as possible, against any...