24 Hours In The Life Of Ruskin Bond: Dreams, Dictionaries, Purple Pens And Other Passions

At 85, Ruskin Bond’s penchant for walking has diminished, but his pen is as prodigious as ever. Comfortably ensconced in his cottage at Landour, the much-adored author reveals how he makes the mundane interesting, his fondness for newspapers and wrestling, and the book he reads the most. 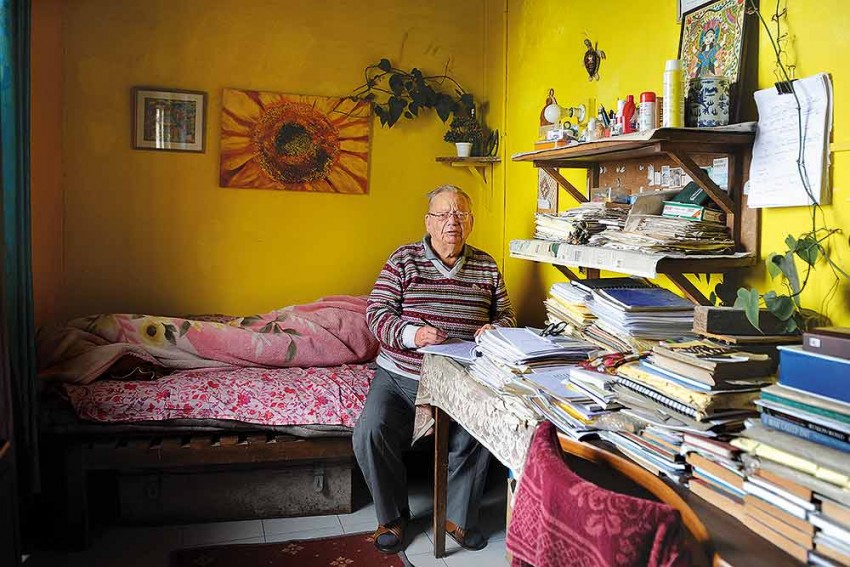 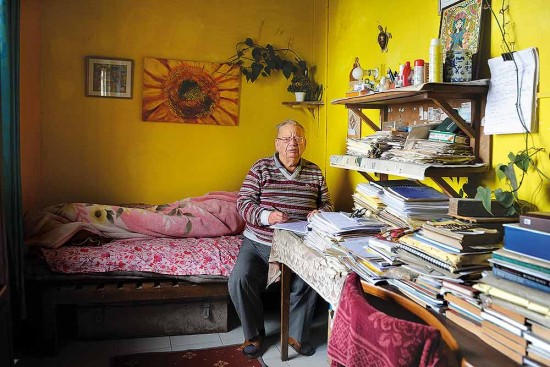 The mist has obscured the steep lanes of Landour, but finding our destination is not difficult. Every bystander knows Ivy Cottage, a literary pilgrimage spot of sorts. As we climb the fabled 22 red steps to his lair, a lone guinea pig heralds our arrival with gleeful squeals. We are ushered into a room where the walls seem to be made of books; I push aside the Bani Thani-imprinted cushions and take a seat.

It feels inappropriate to have roused one of India’s most popular authors from a nap, but Ruskin Bond is exceedingly gracious. “By nature, I am lazy,” he confesses. That is a quite an astonishing admission for a man who has published more than 130 books over seven decades and fervently hiked the Himalayas. At 85, his strolls have ceased, but his pen is as prodigious as ever.

“Earlier, I used to walk a lot and that would inspire ideas. But even though I don’t go out as much now, I don’t have problems finding things to write about. The older you get, the more experiences you have. Besides, I now remember many things I had previously forgotten.” Lately, he has been crystalising these recollections in memoirs. The newest, Coming Round the Mountain—released on May 19, his birthday, this year—recounts his school days in Shimla against the backdrop of Partition.

Bond, however, has been chronicling his life for decades—it was his diary that transmuted into his first novel, The Room on the Roof, which was published when he was 17. Even today, he maintains two notebooks—one for jottings observations and another by his bedside to record dreams. Bond shares one he had last night: “I went to bed with an earache and dreamt that I visited a doctor for some issue with my eyes. He put me on a stretcher and immediately started operating, after which he asked me if I was feeling better. I replied, ‘But doctor, the problem is in my ear, not eyes’.”

Despite the years, he believes his writing hasn’t changed drastically. “I guess I am more fluent now. The other day I picked up my first book and I thought, my goodness, I was obsessed with semi-colons; I hardly use them today. I used to get carried away with descriptive passages and emotions, but now am more detached.” Reflecting on his oeuvre, he says he was more an observational writer than an imaginative one: “I was neither inventive, nor good at plots, but could make the mundane interesting.”

He wrote most of his works on a typewriter, but it gives him a stiff neck now. “I have reverted to pen and paper,” he says. “My publishers don’t complain, though, because I guess my handwriting isn’t bad.” Indeed. As he flips his latest manuscript, jotted on a pad, I can’t help but admire how every squiggle and flourish flows in orderly lines, with barely any strikethroughs.

Bond says he was more an observational writer than an imaginative one. “I could make the mundane interesting.”

His desk in his bedroom, though, is cluttered with books, manuscripts and papers, with just a corner consigned for writing. Bond sits on his bed and writes. “It’s quite convenient. When I get tired, I can fall into a nap,” he laughs. A small statue of Ganesha lords over his writings. Above the desk is a ledge stocked with medicines, lotions and powders. The vibrant yellows walls are further enlivened with paintings, including one of a sunflower that a fan gifted to him. His “lucky plant”, a vine, has crept to the ceiling over the years. Sunlight drapes the cosy room through arched windows, which afford an unimpeded view of Pari Tibba (Witch’s Hill), a prominent—and haunted—setting for many of his stories; its forests untouched by the concrete clutter of Mussoorie.

He has been living in this house for three decades now with his adopted family—Rakesh and Beena, and their children, Shrishti, a biotech professional working in the wine industry in Napa Valley, USA, and Australia; Siddharth, who designs costumes for Bollywood films and stars; and Gautam, a college student. While none of them have followed his literary stride, Bond declares that Gautam “does a bit of writing on strange occult themes”.

Bond doesn’t have a writing ritual or regimen, but these days, a purple pen is his instrument of choice. “Perhaps it’s because I want to write purple prose,” he chuckles. “I am not one of those religious writers who have to scribble 1,000 words a day. But I find that the best time for writing is early in the morning. Beena brings me bed tea around 7 or 8 am—I need someone to wake me up. I try to write for an hour before breakfast. The reason you found me sleeping was that at breakfast, I have a pill to keep my blood pressure steady. It makes me drowsy, so I take a pre-lunch siesta. I am more alert in the afternoon, when I do some reading, writing and correspondence.” 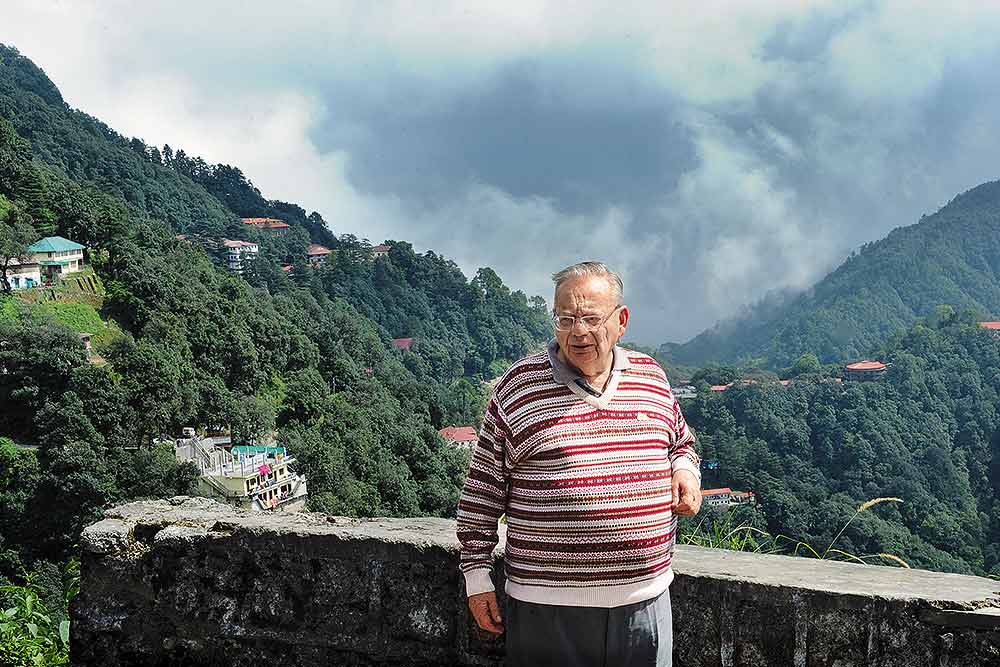 The evenings are often devoted to the small screen: “I roam around on various news channels. Not that I am fond of watching them, but I have to keep myself informed,” he says. Given the opportunity, he would read newspapers from cover to cover—including matrimonials, comic strips and advertisements—but it’s hard to find one in Landour.

The television, however, is the most concession Bond makes to technology. He does not use computers and trying to operate a cell phone turned out to be a rather scarring experience: “Once my landline was dead for a week and Shrishti bought me a phone. I held it to my ear and she told me I would have to switch it on first. Then she said I was holding it upside down. I finally made a call, but couldn’t hear anything. ‘The reception is weak inside,’ she explained. ‘Go to the window…open the window…lean out of the window.’ And of course, I dropped the phone!”

He also watches sports on TV: “Cricket, football, tennis and those funny wrestling matches, what do you call them?” “WWE,” I respond. He then recounts an anecdote of how he had once been mistaken for a wrestler at a television studio in Delhi and he played along, claiming he was training to be a sumo wrestler. For all his fame, this seems to be a frequent occurrence—people have taken him to be the astrologer Bejan Daruwalla and more memorably, the author of Tom Sawyer!

But for all his self-effacing anecdotes, Bond remains dizzyingly popular across generations. Lately, this has translated into demands for him to feature in their selfies. While he enjoys meeting his readers and does not mind posing with them, some can be rather demanding. On the internet, there are forums discussing how to gain an audience with him and mission reports of persistent fans. “Landour is a tourist town and I am included in the attractions after the waterfall and picnic. Sometimes people turn up unannounced,” he rues. “A school principal from Amritsar once bought my books from Dehradun and came to my house asking for an autograph. As I could not meet him, he shouted ‘I paid for your books. I deserve to see you.’ He then returned to the bookshop and demanded a refund! Some years ago, a lady threatened to complain to Khushwant Singh when I did not meet her. I told her I would be more than happy as I had been wanting to be featured in his column for years!”

Bond has continued the longstanding tradition of meeting fans at Cambridge bookshop in Mussoorie every Saturday. He remains a much-thronged speaker at literary festivals across India. These days, he says he doesn’t travel for pleasure anymore, but his calendar remains remarkably busy. He makes frequent trips to Delhi to meet his publishers. The coming week, he is going to Calcutta to address students at St Xavier’s College and Sister Nivedita University. He often visits Odisha, where Gautam is studying, and travels along the coast, to Puri and Gopalpur, with his family.

His idea of a perfect day, though, is sitting on his couch in his living room with a book in hand. These days, the volume is most likely to be a thriller or crime fiction. “I am reading anthologies of locked-room mysteries and Patricia Highsmith’s Strangers on a Train…what else?” he ruminates, “I have also been reading a fat book on the French Revolution and Amitav Ghosh’s latest, Jungle Island. Every day, I get 2-3 manuscripts or self-published books by authors who want my opinion, but I don’t get the time to go through them.” Collections of short stories, one of his favourite genres, and Agatha Christie paperbacks stand outamid his bursting shelves.

But the book he dips into most is the corpulent Oxford English Dictionary on his coffee table. “Take a picture of me reading it. You can say its Bond’s favourite book, he’s still learning words,” he jokes. “Most people refer to the internet, but the advantage here is I get a little exercise. You can do weightlifting with it,” he says as he flexes the tome. “It’s fascinating to dabble in the history of words and their origin. You keep discovering new expressions and new ones keep getting into the dictionary. I like old words too—I sometimes resurrect ones that are almost obsolete. The other day, I used ‘rapscallion’ in a story just for fun.

Indeed, fun is something Bond always revels in, whether it is in his myriad works, pithy observations or the sundry jobs he took up before becoming a full-time author—including one with Thomas Cook where he was fired because he could not wrap his head around the difference between a twin and double bed. A convivial and charming raconteur, he is as enrapturing in speech as in his writing. I would have loved to spend more time with him, but now it’s time to leave—there is a meal to be had, followed preferably by another nap.

By Syed Saad Ahmed in Landour