TNCC president K.V. Thangkabalu has gold in his name. Now he has proved he can be silver-tongued too—in a funny way. 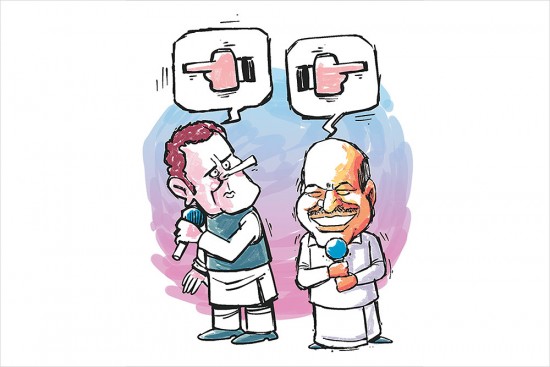 Former Union Minister and TNCC president K.V. Thangkabalu has gold in his name. Now he has proved he can be silver-tongued too—in a funny way. The Congress leader quickly emerged as the troll of the week after a string of gaffes when he translated Rahul Gandhi’s English speech at Nagercoil on March 14. Here are a few nuggets:

Rahul: That is precisely why we love the people of Tamil Nadu (for resisting the imposition of a single culture by the BJP).

Balu: That is why we are fighting for it. We will show our strength at the right time.

Rahul: That is why we respect the people of Tamil Nadu.

Balu: Narendra Modi is the enemy of Tamil Nadu

And when Rahul Gandhi talked about Karunanidhi as a great leader, Thangkabalu translated it as Kamaraj. When Rahul, as an afterthought, added Kamaraj, Balu replied nonchalantly, “I’ve already translated sir.”

Rahul too did not help by trying to ­interpret the Tamil equivalent of ‘Truth will Triumph’. “Unmai Jellum,” Rahul declared, and as Balu struggled to interpret that, Rahul repeated it—only for the former-MP to blurt out, “He (Modi) will go to jail!”

Leaders of the Congress, DMK and other alliance parties could be seen squirming even as the crowd was ­bemused. By evening, social media was awash with memes ridiculing Thangkabalu’s efforts. The ex-minister later broke his silence, claiming he had successfully translated 90 per cent of Rahul’s speech. “I had difficulty only with a few sentences due to the echo from the speaker, made worse by gusts of wind on the stage,” he told a Tamil news channel.