Flimsy petitions are simply clutter to be dealt with by judges in absence of a filtering mechanism. And they’ve been stacking up. 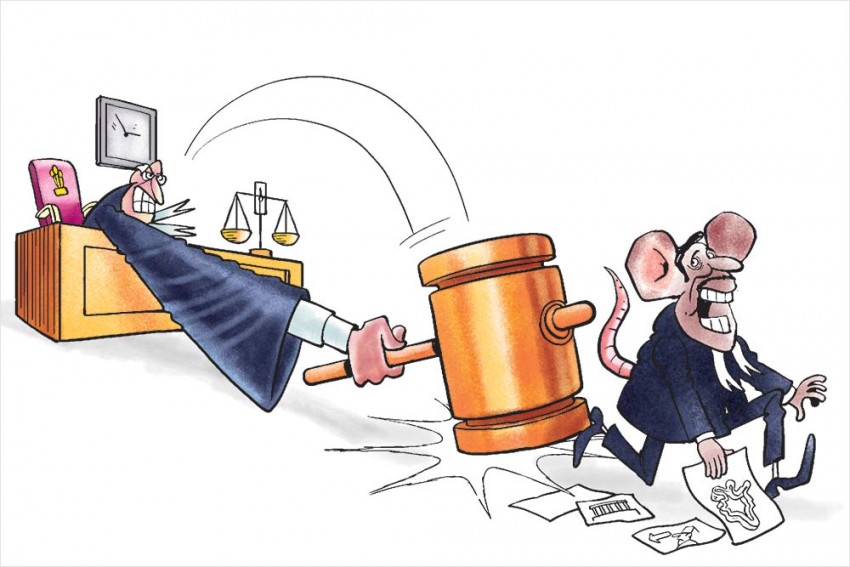 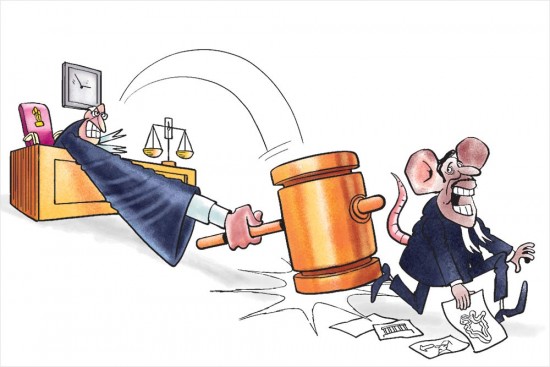 Almost exactly 40 years ago, on March 9, 1979, Kapila Hingor­ani made history by getting a ­Supreme Court bench of Justices P.N. Bhagwati and D.A. Desai to order, in the ‘Hussainara Khatoon’ case, the release of nearly 40,000 undertrials languishing in the jails of Bihar’s Patna and Muzzafarpur. The verdict had instantly made Hin­gorani famous as hers was the first public interest litigation (PIL) to ever be ­entertained in Indian courts. In later years, as she successfully fought many such cases for the rights of the und­erprivileged and those wronged by the system, Hingorani earned the moniker, ‘mother of PILs’.

The ‘Hussainara Khatoon’ case had ­established a new paradigm in the Indian justice system, which until 1979 was ­accessible to only those personally aff­ected by the law or facing penal action. Hingorani, encouraged by Justice Bhag­wati’s decision to allow her to pursue a case in which she had no personal locus standi, made PILs a permanent fixture in Indian jurisprudence.

Last week, had Hingorani been alive—she passed away in December 2013—she would have hung her head in embarrassment seeing how PILs have come to be used as a means to gain publicity, or more disturbingly, further bigotry and communal hate in the name of public interest.

On March 15, a Supreme Court bench of Justices Rohinton Fali Nariman and Vineet Saran dismissed a plea—filed by former RSS member and social worker from Uttarakhand, Sangat Singh Cha­uhan—that sought directions for sending all Indian Muslims to Pakistan. “Do you seriously want to argue this? We will hear you, but we will pass strictures against you,” an irritated Justice Nari­man had told the petitioner and his counsel before dismissing the petition. 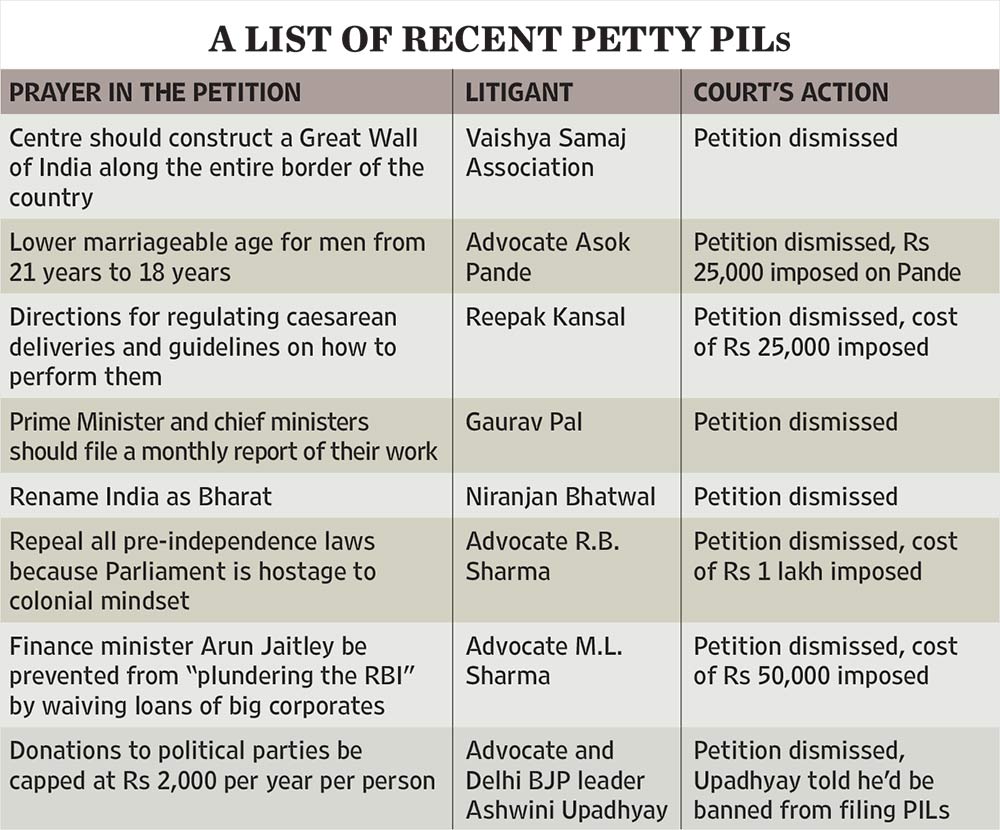 While the dismissal of Cha­uhan’s petition and the court’s stern rebuke were expected, questions have also been raised on the need for an effective deterrent to prevent such frivolous cases, especially those that blatantly violate the Constitution, from being filed.

Senior advocate Indira Jaising vented her ire on Twitter, asking: “Why did the judges not impose costs? Is the Supreme Court a playground for violating the Constitution? How can anyone dare to say in court that Indian Muslims should be sent to Pakistan?”

In recent years, the Supreme Court has often imposed costs on litigants who had filed pleas that were far less atrocious than Chauhan’s. In May 2017, then Chief Justice of India (CJI), J.S. Khehar, had imposed a penalty of Rs 25 lakh on Suraz India Trust and its chairman, Rajeev Dahiya, for filing as many as 64 frivolous petitions. CJI Khehar had also restrained Dahiya from filing “any case, including PIL, in any court across India.”

In recent years the Supreme Court has imposed costs on litigants who had filed such ‘irrational petitions’.

CJI Khehar was, arguably, the most vocal chief justices in recent years on the need to curb flippant cases to ensure that the sanctity of the PIL system, responsible for some of the most progressive verdicts delivered by various courts, is not lost. Heavy penalties were imposed by him on various litigants, including a fine of Rs 10 lakh on a Bihar MLA, for “wasting precious judicial time”. In March 2017, an apex court bench led by him had asked all courts to “impose exemplary cost” against petitioners who “choke the judicial system” with absurd PILs. “The sanctity of the judicial process will be seriously ero­ded if such attempts are not dealt with firmly. A litigant who takes liberties with the truth or with the procedures of the court should be left in no doubt about the consequences to follow,” the bench, also comprising Justices D.Y. Chan­drachud and S.K. Kaul had said.

But, irrational petitions continue to stack up. Legal experts think this may be because there’s no mechanism to filter genuine pleas from what have come to be known as “publicity interest” or “political interest” litigations and the cou­rts have so far placed the onus of curbing the menace on litigants.

A former Delhi High Court chief justice told Outlook that the judiciary needs to be more proactive in dealing with those who file cases “purely to gain publicity”. He says: “PILs like the one dema­nding deportation of Indian Mus­lims are a criminal waste of the court’s time. The increasing frequency of such petitions is a matter that should deeply concern the judges and a mechanism to arrest the abuse of PILs, which otherwise are an effe­ctive tool of social justice, must be put in place with urgency.”

Under the present system, only judges have the power to decide if a petit­ion should be admitted or dismissed while the job of the Registry (of the SC or of any high court) is to ens­ure that technical requirements of filing a petition have been fulfilled by the litigant. This means that a petition gets listed for admission irrespective of its merit, eating away the court’s time that could otherwise be utilised to hear the massive backlog of cases. Union minister of state for law and justice, P.P. Chaudhary, had recently ­informed the Lok Sabha that the total number of cases pending before the SC, as on December 1 last year, stood at 56,994. The National Judicial Data Grid puts the total number of cases pending before various high courts, as on March 17, at a whopping 42.89 lakh.

“PIL was introduced in Indian jurisprudence to help further the cause of justice. Unfortunately, it has now become routine for people to use these either to gain publicity or for political agenda. The court cannot entirely abdicate its resp­onsibility (of deciding whether a case ­deserves to be heard) in favour of the Registry. However, it is within the powers of the court, and its chief justice, to lay down broad guidelines for the Registry to follow while deciding what kind of cases deserve to be listed,” ­former CJI, T.S. Thakur told Outlook.

Senior advocate and former president of the Supreme Court Bar Ass­ociation, Vikas Singh, says those who file publicity interest litigations must be penalized by the court so that they know that publicity has a deterrent cost attached to it. “Even if a frivolous plea is eventually dismissed, the judges do need to spend time going through the prayer and, on most occasions, hearing the petitioner. The Registry should be empowered to at least check the credentials of the person filing a PIL and those who have a prior record of filing such cases should be warned of the consequences,” he adds.

In the 40 years since its inception as a course for judicial remedy, the PIL system emerged as a potent tool for ensuring transparency in governance and access to social justice. In the past few years, PILs have been responsible for landmark verdicts that outlawed instant triple talaq, identified privacy as a fundamental right, opened the doors of the Sabarimala temple in Kerala and Mumbai’s Haji Ali shrine to women, legalised consensual homosexual relations and made passive euthanasia permissible.

A litigation that demands deportation of Indian Muslims to Pakistan strikes at the very core of the purpose that a PIL is supposed to serve—public interest. It is also an insult to the memory of Kapila Hingorani, who in November 2017, four years after her death, became the first and only woman lawyer in the Supreme Court’s seven-decade-long history to have her portrait adorn the walls of its ­library alongside legal luminaries like M.C. Setalvad and C.K. Daphtry.