Game Over, Or Halftime?

A spectacular victory is won over a redoubtable foe. Mamata now faces a full-blown tussle with the BJP, her only adversary in Bengal. 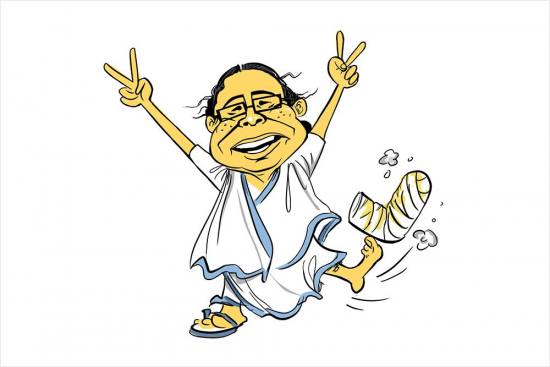 Perhaps it takes a clairvoyant to call the closest of electoral fights accurately. “Didi has taken a great risk,” a Trinamool Congress MLA from East Midnapore district had said a few days before the second phase of the assembly elections on April 1, in which Mamata Banerjee’s constituency, Nandigram, was to vote. Requesting anonymity, he had said: “This one decision to take Suvendu head-on in Nandigram has saved the party’s district unit from a vertical split after his defection and, as far as I understand, has bolstered the morale of the party’s workers and leaders across the state. I won’t be shocked if Didi’s show of confidence helps us return to power, but she ends up losing here.”

His positive prognostication, with that one foreboding, came true on May 2, when the TMC returned to power with 213 of the 294 seats in the assembly and a 48 per cent share of the polled votes—the party’s best performance ever. Yet Mamata Banerjee lost from Nandigram by a slender margin of 1,956 votes after a series of drama over the recounting of votes.

Even in East Midnapore district—a bastion of the Adhikary family comprising Suvendu’s father, Sisir, and brother, Dibyendu—the TMC won 10 of the 16 assembly seats. While stating that the party will challenge the Nandigram election result, Mamata also made a rem­ark hinting that choosing Nandigram specifically, and thereby accepting the BJP’s challenge of contesting from one seat, was a ­calculated move. “I would rather ­ign­ore what happened in Nandigram. Sometimes, small sacrifices are ­req­uired for a great gain,” she said. It was the political equivalent of sacrificing a symbolic pawn on the ­electoral chessboard to corner the opponent—in short, a masterstroke.