Anti-BJP coalitions, dealt a stunning blow, hope for a revival after introspection 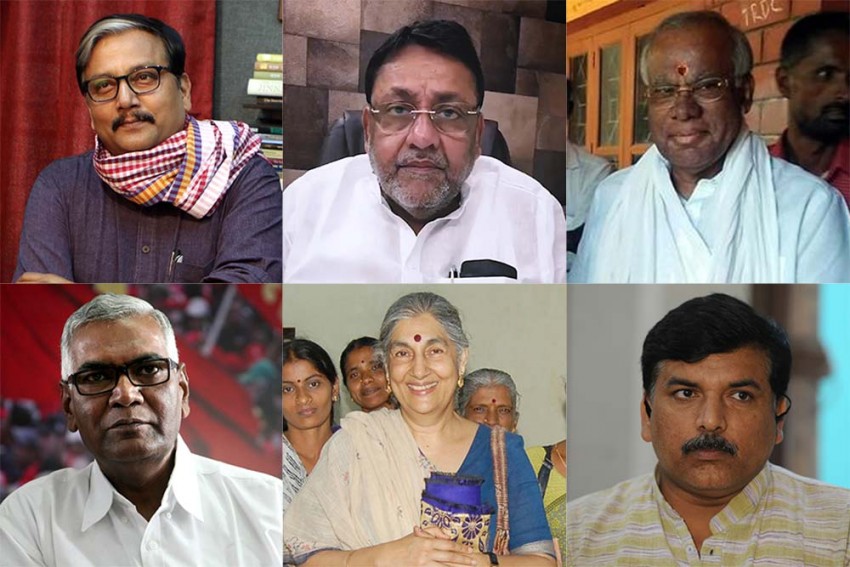 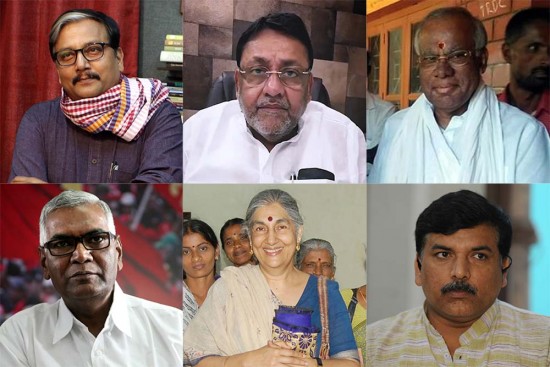 Summer 2018. The swearing-in ceremony of Karnataka chief minister H.D. Kumara­swamy witnessed some unusual mom­ents in political history—the Vidhana Soudha dais turned into a theatre of visual memory. Arch-­rivals shook hands. Improbable threa­tened to become probable. If it reca­lled the heady Janata years, there was a twist. The common enemy was not the Congress, but the BJP. The Congress was on this side. Sonia and Rahul Gandhi shared space with not just Chandrababu Naidu, champion of ‘fed­­­eral’ politics, or Tejashwi Yadav of the RJD, a perennially friendly party, but also more (mutually) iffy fellow travellers such as the CPI(M), represented by the amiable Sitaram Yech­ury, the Trinamool sup­remo Mamata Banerjee and AAP’s Arvind Kejri­wal. That tentat­ive ente­nte didn’t travel far—their ess­­­­­­en­­­­tial incompatibility became the story of 2019.

“Nationalism dominated all else...we’ve learnt a lesson from BJP on strengthening party at the grassroots level.”
Manoj Jha, RJD spokesman

At that time, this was seen as a har­binger of resurgence for coalition politics—the coming together of disparate political outfits to keep the saffron alliance out of power. Some saw it as a repeat of 1967—where a broad coalition led by Ram Manohar Lohia defeated the Congress in nine states. The great show of bonhomie was again on display in December in Lucknow, where the SP and BSP sealed their historic alliance, burying a quarter-century of rivalry. But the contra­dictions­­—sometimes silent, often overt—won the day. That part of the political spectrum which invented the whole logic of alliances, and inaugurated the coalition era, faces a dire existential crisis today. Modi 2.0 has trumped them decisively.

The NDA is also a coalition, but buttressed by a 300+ BJP, it has a strong anc­hor. On the other side, the old story of political realignments—a shaky smorgasbord of satraps and would-be national leaders who can’t stand each other otherwise but come together opp­ortunistically, without any defining idea—has been struck down mercilessly by the voter. Some regional parties that were expected to play a significant role in the formation of the next government were in for a rude shock, and were routed in their own turf. It was a patchy logbook—Maharashtra, Karnataka, Jharkhand, Tamil Nadu saw tickmarks, at least for alliances happening, if not succeeding—but big ones like UP held out a sobering veto, and Delhi stood out as a small but significant tone-setter.

In soul- searching mode, most Oppo­sition leaders admit unity across such diversity was a herculean task: both ideological differences and power-jockeying came in the way. The analysts can’t but agree. “The Congress had partners but they did not constitute a coherent UPA. Previous pre-electoral UPA alliances had a Common Minimum Program and coordinated campaigns. In 2019, the Opposition ran in complete dispersed order. This was a massive disadvantage in a race that opposed them to the simple and effective proposition of one leader,” says Gilles Verniers, pol­itical scientist, Ashoka University. Look no further than UP, where the seemin­gly formidable SP-BSP-RLD combination ended up looking like some latter-­­day version of the Rajput-Afghan alliance against Babur, clearly outmano­euvred by tactics and technology. The perceived watershed moment of SP-BSP linking up meant nothing without a coherent narrative.

“If Jagan, Mamata and Stalin can survive the onslaught, why not us? Certain lessons need to be learnt.”
P.G.R. Sindhia, JD(S) leader

Analysts point to how the alliance was not forged on the basis of any common programme. “The BJP formed a broader social alliance as a counter. It wooed some of the Most Backward Castes, which the other ‘social justice’ parties couldn’t. The SP-BSP couldn’t connect to the people, they didn’t have anything to offer,” says political analyst Badri Narayan. The lack of a common ideological vision left them high and dry. Their primary aim was to dislodge the Modi government, they failed to offer any ‘positive’ national narrative to voters. “Parties get carried away by the expected strength of their partnership. Alliances based on combinations of specific electoral segments run the risk of being perceived as caste alliances rather than broad political platforms,” says Verniers.

In Bihar, Modi magic trounced the RJD-led caste calculus. The party itself drew a blank—the first time since its formation in 1997. RJD spokesman Manoj Jha, though, dismisses talks of an existential crisis: “You cannot write the obituary of a party or an alliance after a defeat. It was a puzzled election. The narrative of nationalism dominated over economy, communal harmony, emp­­loyment”. Yet, he agrees the alliance was put together at the last mom­ent. “All parties need to learn from the BJP-RSS. Politics should be a round-the-clock vocation. We should go back, identify issues locally and regionally and lead from the front,” says Jha.

“Left needs to revamp its organisation. As in TN, secular democratic parties should have come together.”
D. Raja, CPI national secretary

Tamil Nadu remained a saving grace: the DMK-led alliance won 37 of the state’s 38 seats. In neighbouring Karnataka, where the JD(S)-Congress coalition government is in turmoil after the BJP swept the elections, the alliance partners are still reeling, admits JD(S) leader P.G.R. Sindhia. “Many leaders haven’t overcome the shock yet. It’s difficult to predict anything now,” says Sin­d­hia. The JD(S) is in an introspective silence. “I can’t say if we (they and Congress) will stay together. If regional leaders like Jagan, Mamata and Stalin can survive the onslaught, why not us? Certain lessons need to be learnt,” he says.

Maharashtra was another graveyard for the Opposition. But the Congress-NCP alliance, whose expected ‘strong fight’ against the BJP-Shiv Sena combine was a non-starter, hopes to regain lost ground before October. “NCP-Congress will go together in assembly polls, even if the BJP has more partners. It took advantage of Hindu nat­ion­alism this time,” says NCP leader Nawab Malik. They propose to counter it by focusing on agrarian distress—a pitch that failed this time.

“First we will put our house in order. It’s a new kind of politics, but people’s issues will come to the fore soon.”
Subhashini Ali, CPI(M) leader

What of parties like AAP? It managed to win only one seat in Punjab—out of the 40 it contested. The months-long alliance talks between the Congress and AAP cast a shadow on Opposition unity—their adamant positions became a metaphor for the failure of Opposition unity. However, no lesson seems to have been learnt, as blame games take up space on the eve of impending assembly elections. That’s AAP’s corner. “Even if we had allied with Congress, the BJP would have won all seven in Delhi. We will go it alone in the assembly elections. No question of allying with Congress now,” says AAP’s Rajya Sabha member Sanjay Singh.

In the South, the parties like the TDP are at the crossroads after a rout in both assembly and parliamentary elections. The severest setback was for TDP leader Naidu. “People did not accept the fact that we fought with Modi. We were allies with BJP for a long time. Traditionally, the TDP is seen as an anti-­Congress party,” says TDP leader Lanka Dinakar. Will they go back to the BJP fold? Dinakar only says allying with the Congress was a mistake. “We can’t say anything about the future. We have unnecessarily created a lot of enemies after breaking with NDA. The alliance with Congress created a lot of problems, especially after we criticised Congress for four years for the bifurcation of the state,” says Dinakar.

“Even if we had allied with Congress, the BJP would have won all seven seats. We’ll go it alone in assembly polls.”
Sanjay Singh, Rajya Sabha member, AAP

A less noticed factor is the decimation of the CPI(M) in West Bengal and Kerala. Questions abound about the Left’s political relevance now. CPI(M) leader Subhashini Ali says the party will put its house in order first. “We have to take stock of what happened. It’s a new kind of politics. But people’s issues will come to the fore soon,” says Ali. “Secular democratic parties should have come together like in Tamil Nadu,” says CPI’s D. Raja. “They should have been more accommodative to each other. Every party has to introspect,” says Raja. Admitting to a popular disconnect, Raja says the Left needs to rew­ork its political strategies.

But the overall failure haunts all of them. Verniers puts his finger on the problem: “Coalitions are the product of political fragmentation, the single-most important long-term trend in Indian politics. We have entered a phase of consolidation with the BJP, but it is going to wane eventually. Coalitions will always be there as the alternative.” But yes, not just as a random aggregation, without a real story to tell.

BJP Has Emerged As The Nucleus Of Indian Polity: Bhupender Yadav