A controversial Bihar Police letter asking the Special Branch to 'spy' on the RSS has not amused the BJP. Did JD(U) chief Nitish Kumar know about it? 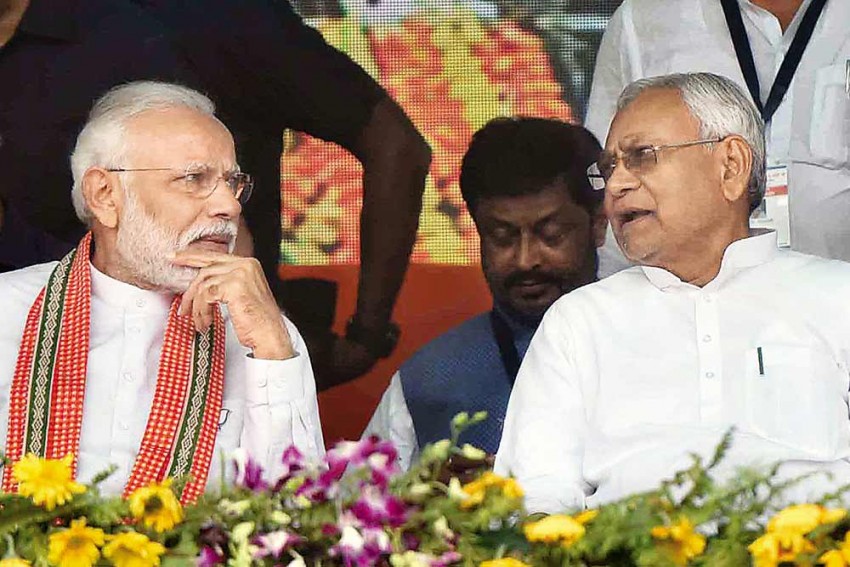 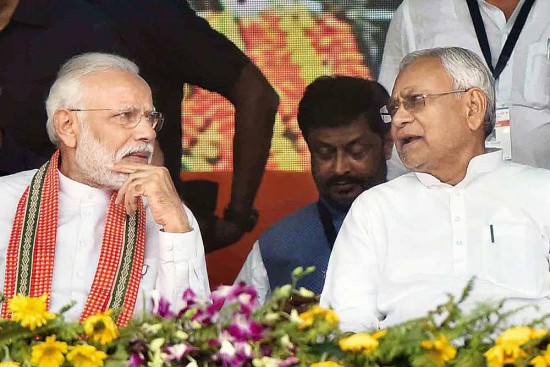 Stealth, surveillance, stakeout—and subterfuge, sometimes—are common devices the enemy employs to bone up on its rivals. When similar tactics are deployed against a partner-in-power, trouble touches the shore. The case in point is a recent order to the Bihar Police’s Special Branch to ‘spy’ on the Rashtriya Swa­yamsevak Sangh (RSS)—the BJP’s ideological fountainhead—and many of its affiliates. The move has set off speculation over the fate of chief minister Nitish Kumar’s Janata Dal (Uni­ted)-BJP coalition government ahead of the 2020 assembly elections.

The genesis of this ninjutsu operation can be traced to a letter—dated May 28 and posted barely five days after the BJP retained power at the Centre with a massive 3-nought-3 verdict, and two days before Narendra Modi’s NDA government was to be sworn in for a second term. The missive from the superintendent of police (general) of the Special Branch, which reports to the home dep­artment headed by the chief minister himself, was clear. It directed all DSPs and district Special Branch off­icers to gather and give details of the RSS and its 18 affiliates operating in their areas. The report—containing names, addresses, phone numbers, and occupations of all office-bearers—must be submitted “within a week”.

“This should be considered extremely important,” says the confidential letter that got leaked last week. 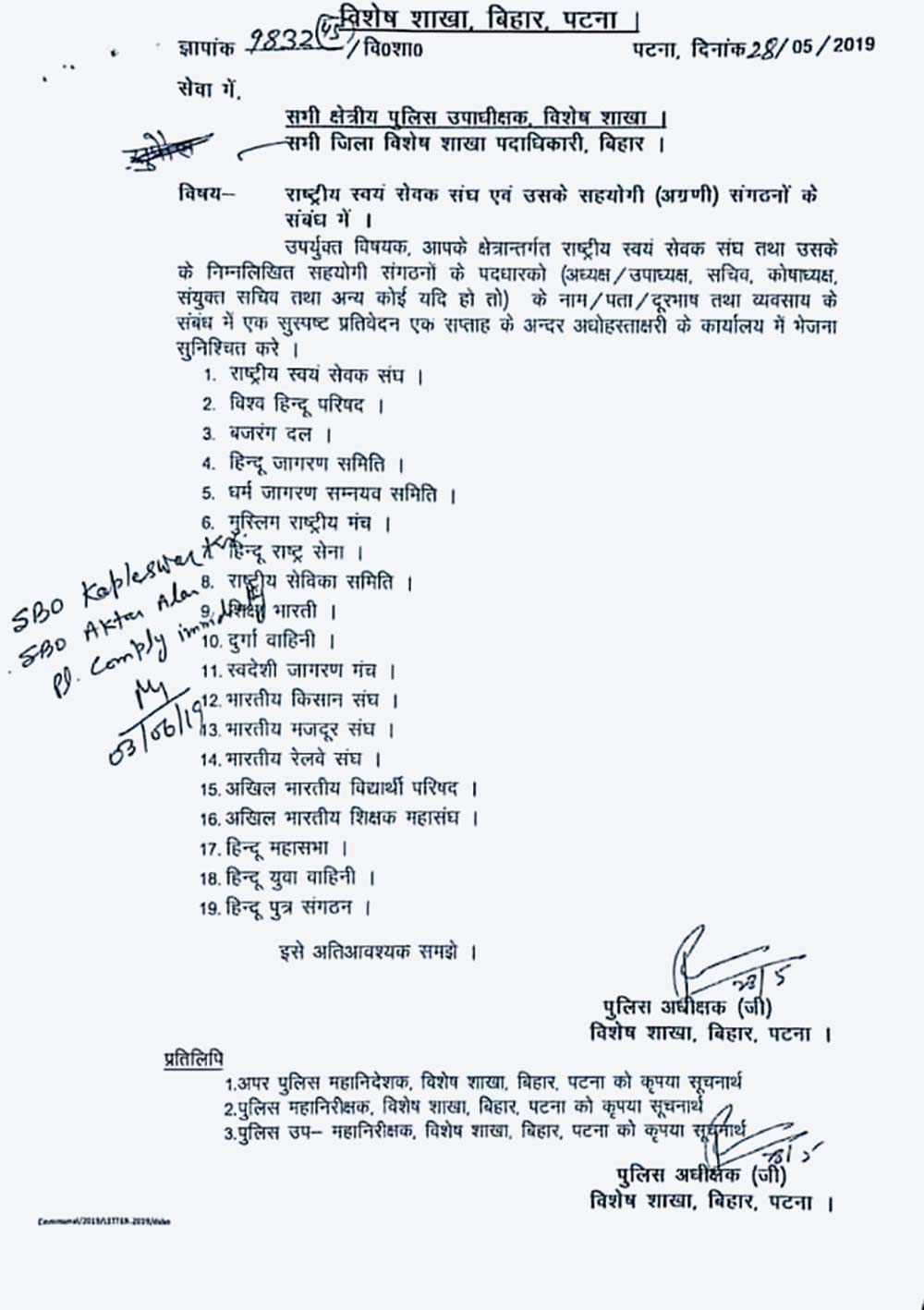 “How can an SP write something like this on his own without the headquarters, or his seniors, or the CM, knowing about it?”

The directive left BJP leaders in Bihar fuming. Party MLC Sanjay Mayukh raised the issue in the legislative council during its monsoon session, demanding a reply from the government. Another party lawmaker, Sachidanand Rai, questioned the motive of Nitish, saying he was interested in remaining the chief minister regardless of which alliance he is part of. Elsewhere, Union minister Giriraj Singh wondered “why such a letter had been issued by the Bihar Police when the JD(U)-BJP government was in power in Bihar and its deputy chief minister Sushil Kumar Modi (of the BJP) himself is a product of ABVP?”

As the controversy escalated and the BJP reacted sharply, the Nitish government feigned ignorance about the letter. The state police headquarters hurriedly convened a press conference to assert that neither the government nor the police top brass was aware of it. Accor­ding to ADG (Special Branch) J.S. Gangwar, it was a routine letter issued by the SP (general), Rajeev Ranjan, and does not have the approval of the home department, the DGP or the police headquarters. “The government was also in no way involved in the whole exercise,” he avers.

Special Branch sources say they had received some inputs on possible threats to leaders of the RSS and its various affiliates in the run-up to the Lok Sabha elections and the SP’s letter was merely a follow-up action. SP Ranjan, who had issued the letter and was transferred since, is currently on a training sortie outside Bihar.

Political observers find it hard to bel­ieve that a letter on such a sensitive subject could be issued by an SP-rank officer without the knowledge of his superiors in the department or for that matter, the chief minister. Nitish, for one, has always been known to keep his political cards close to his chest, so close that even his trusted aides usually have no inkling of his next move, let alone allies. He has carefully cultivated a reputation over the years of being a leader who hardly takes any step without weighing the pros and cons.

RJD’s national vice president Shiva­nand Tiwari says it is difficult to accept that an SP can suo motu take such act­ion, regardless of what the state police top brass may say. “How can an SP of the Special Branch write something like this on his own without the knowledge of the Bihar Police headquarters, his seniors in the Special Branch or the chief minister?” Tiwari asks.

Political commentators see it as yet another sign of the chasm between Nitish and the BJP that has been widening since the Lok Sabha elections. Economist N.K. Choudhary says there is certainly more than what meets the eye about the drama surrounding the letter. “The JD(U) and BJP are playing the game of shah aur maat (check and mate),” he tells Outlook. “The BJP thinks that it’s most opportune time is coming in the 2020 assembly elections, which will help the party form its government in Bihar on its own (for the first time), and it now wants to get rid of Nitish. On the other hand, Nitish understands it well and that is why he is also building pressure on the BJP through a letter like this. It is all too obvious.”

Nonetheless, both the JD(U) and BJP have already gotten into the damage-control mode to apparently project that everything is hunky dory within the alliance. The state police headquarters has ordered an inquiry into the whole episode to fix accountability, while the BJP has served a show-cause to Rai for his outburst against the chief minister. But the cracks in the alliance had already come to the fore ever since Nitish declined to join the Modi ministry after the elections. The JD(U) had won 16 seats in Bihar in the general elections, but the BJP is learnt to have offered it only one cabinet berth in the Modi’s government at the time, which was politely declined by Nitish.

Even in the run-up to the parliamentary polls, the chief minister had specifically asked for the Darbhanga seat during seat-sharing talks for his trusted associate Sanjay Jha. But the BJP turned down his request, fielding its own candidate, Gopalji Thakur. In apparent retaliation, Nitish subsequently expanded his ministry, incorporating eight new JD(U) ministers, including Jha. The BJP was reportedly offered only one berth, which the saffron party chose to not accept.

Ever since the JD(U) and the BJP bec­ame allies in 1996, they have always had different stands on three key iss­ues—construction of the temple at Ram Janmabhoomi in Ayodhya, abrogation of Article 370 and a Uniform civil code. But in recent times, Nitish’s different stand on other issues such as triple talaq has put their relationship under considerable strain and leaders from both parties view each other with suspicion.

A section of JD(U) leaders currently appears to be under the impression that the BJP is aspiring to form its own government in Bihar after the 2020 assembly elections. They apparently fear that the saffron party might dump Nitish as the chief ministerial face of the coalition at the last minute and leave him to fend for himself. However, a JD(U) leader, on the condition of anonymity, says it would be foolish for the BJP to fancy winning an election in Bihar without projecting Nitish as the chief minister. “Remember, what happened to the BJP in 2015 when Nitishji had switched sides to fight the assembly polls as the leader of the maha­gathbandhan?” he asks. “The BJP was reduced from 91 to 53 seats in the state assembly. It will do worse in 2020 if it parts ways with him.”

In Quest For Citizenship, Assam Braves Rampaging Floodwaters With Hope And A Prayer