Fire Rises In The East

Arunachal joins the list of Northeast states singed by BJP 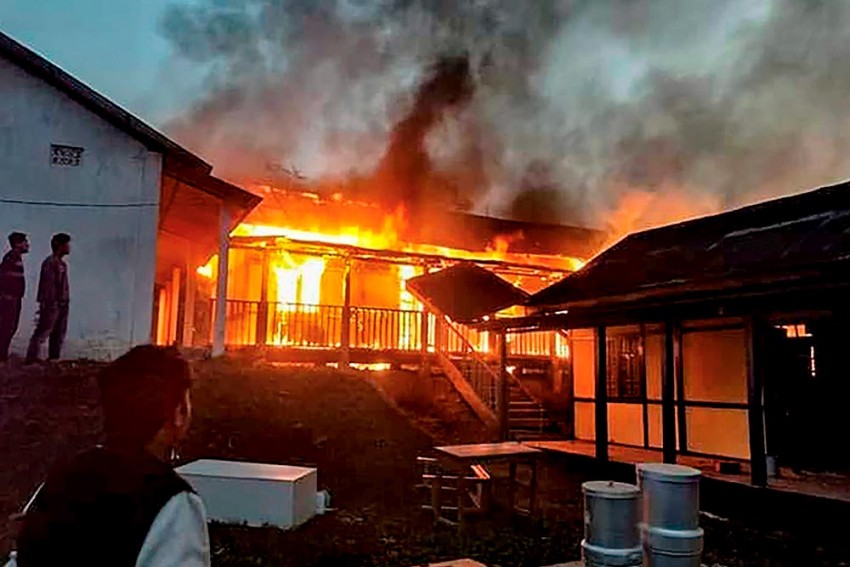 Mob Fury
An Itanagar building on fire; the Dy CM’s house faced it too
Photograph by PTI
Abdul Gani February 28, 2019 00:00 IST Fire Rises In The East 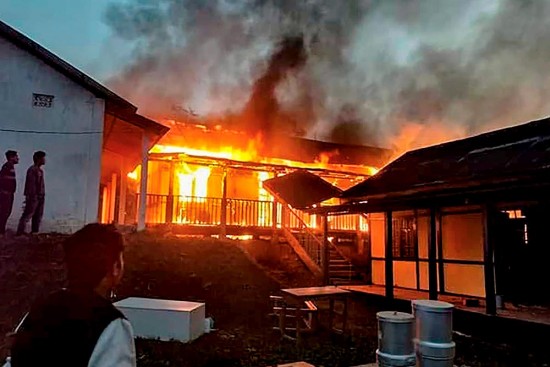 For days, Itanagar burned as mobs went on the rampage in the capital of Arunachal Pradesh last week against the state government’s ­decision to grant permanent resident status to six non-tribal communities. Those who suffered included musicians and artistes gathered for a film festival, which was called off. The worst was, however, yet to come as mobs thronged the streets with greater fury ­after hours of relative calm. This time, the target was deputy chief minister Chowna Mein’s residence, which was set on fire. Then there was mass looting from a well-known department store. At least three people were killed in police firing to control the rampaging protesters. When the fire was fina­lly doused, the state was left with its image in tatters and the ego of the government badly bruised. Chief minister Pema Khandu was forced to issue a statement saying that his government will not pursue the issue “ever again”.

The permanent resident certificate (PRC) is an official document which helps the holder to seek government jobs or admission in education institutes. The six communities, concentrated in Arunachal Pradesh’s Changlang and Namsai districts, have been seeking residency certificate for decades. But the state’s residents fear that such a move could rob the original inhabitants of rare job opportunities—another layer in Northeast’s age-old “local versus outsider” divide. But beyond the obvious, there is another story to the violence in Arunachal Pradesh, one that encompasses the entire region.

Permanent residency was an old demand from the six non-tribal groups settled in Arunachal. Original inhabitants see it as an infringement.

“The BJP seems to be utterly disengaged from ground realities in the Northeast.  The party seems to be more interested in pushing their agendas, with disastrous consequences,” Itanagar-based journalist Tongam Rina tells Outlook. “The party is not sympathetic to the sentiments of the people, which has led to embarrassing situations for it.” The BJP is in power in six states in the region, whether on its own or in alliance with other parties. Rina was, of course, referring to a series of setbacks for the party in the Northeast in recent times, the most notable being the widespread anger over the contentious Citizenship Amendment Bill, 2016. “It is very rare for N-E parties to oppose the party in power at the Centre. But Naga­land, Mizoram, Meghalaya, Aruna­chal and Manipur said no to CAB. Before CAB was tabled (in Parliament), were the state governments even consulted?” Rina asks. The bill endorses citizenship to non-­Muslim migrants from Afgha­nistan, Bangladesh and Pakistan who arrived in India till December 31, 2014.

Critics allege that the BJP rushed the bill to make amends after facing opposition from a section of its supporters, especially in Barak Valley, over the process to update the controversy-ridden National Register of Citizens (NRC), which aims to determine the original Indian citizens in Assam. But due to widespread opposition across the region, the Centre didn’t table the bill in the Rajya Sabha.

Political commentator Sushanta Talukdar says the BJP’s approach of looking at different issues from the narrow perspective of electoral gain or loss appears to have blurred the vision of New Delhi on larger questions of internal security, demography change, identity and ill­egal migration that beset the border region. “The prevailing situation is only a manifestation of BJP’s approach of exc­luding voices of dissent and listening only to its supporters while taking critical policy decisions,” Talukdar adds.

The BJP blames the Congress for fanning the violence in Arunachal . “On February 22, Pema Khandu made it public that the PRC thing is over. But in spite of that, protests escalated. Apart from that, the mobs targeted only BJP leaders’ private property and offices,” says state BJP president Tapir Gao. The BJP had earlier also blamed the Congress for pol­iticising the NRC and CAB issues. But many say that the BJP may have emerged as its own biggest enemy with these unp­opular decisions. “At the rate BJP is going in the region, it needs no opposition to destroy the party,” adds Rina.