‘Farmers Our Brothers, Misled By A Handful’

Haryana CM Manohar Lal Khattar tells Harish Manav that only 40 people are misleading thousands of farmers. Earlier, they were demanding a guarantee on MSP. Now they want repeal of the new farm laws, rise of milk price to Rs 100 per litre and free up the toll plazas. 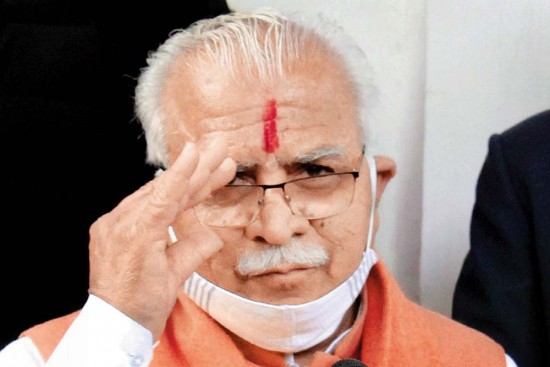 In the midst of the Covid ­pandemic, Haryana is also facing many challenges on the socio-economic front. For more than 100 days, areas of the state bordering Delhi have been the epicentre of the farmers’ agitation against three new farm laws enacted by the Centre. And in the assembly, the Congress tried to move a no-confidence motion against the BJP-JJP coalition government over the issue, but failed to take it ­forward. CM Manohar Lal Khattar tells Harish Manav that he is confident his ­government will complete five years in power. Excerpts from the interview:

Over three months, Haryana’s farmers have been on a warpath against the new farm laws. Twelve rounds of talks haven’t broken the deadlock. Have you given any suggestion to your party’s central leadership in this matter?

Only 40 people are misleading thousands of farmers. Earlier, their demand was only for a guarantee on MSP and our government is already purchasing six crops under MSP. Now they are not only demanding the repeal of the farm laws, but also asking to raise the price of milk to Rs 100 per litre and free up the toll plaza. Misled by their leaders, they are destroying their ready-to-harvest wheat crop.

Your government has offered welfare schemes to the ­farmers, but those haven’t managed to convince them on the farm laws. Why?

We know some farmers and khap panchayats have ­publicly boycotted BJP-JJP leaders. Yet we see the ­farmers as our brothers. The deadlock would be broken when they understand ­reality. Considering the ­current environment, ­especially with the farmers being restless, the government has laid special emphasis on welfare schemes. From time to time, I have been ­monitoring the progress of...