Kobad Ghandy, one of India’s top Maoist ideologues, speaks about the victory of the anti-­farm laws movement, the lessons that India’s left movement can draw from it and the power of non-violence.

Kobad Ghandy, 74, whom the CPI(Maoist) recently expelled, has raised a number of unc­omfortable questions for the Indian Left. Ghandy studied in elite institutions such as the Doon School, St Xavier’s College, Mumbai and  Cambridge University, UK, before joining the Naxalite movement in the early 1970s. Incarcerated for 10 years in different jails in seven states, he wrote a series of articles on ideological and philosophical questions in the media, and his book, Fractured Freedom: A Prison Memoir, was published earlier this year. His wife, Anuradha, who died in 2008, was also a central committee member of the Maoist outfit. Currently out on bail, Ghandy spoke to Snigdhendu Bhattacharya on the victory of the anti­-farm laws movement, the lessons that India’s left movement can draw from it and the power of non-violence. Edited excerpts:

Farmers had a major victory on the controversial farm laws. What are your observations on the achievement?

My knowledge of the movement is limited, as it comes purely from what I got to read living in Mumbai. It needs to be thoroughly studied because it sets a historic precedent of effective mobilisation of the masses on a scale probably not seen since the time of Jai Prakash Narayan’s movement. It is of that significance, or may be, even greater. While the JP movement was more political, and this one was on economic demands, it too had its political implications.

The ruling dispensation tried every method in their book to crush this movement but the farmers outdid them. The government was very adamant about not repealing the laws, because the laws were formalisation of what they had already been implementing since 2016. In that context, it’s a historic movement. It’s something we should all learn from. As for success, its leaders have themselves acknowledged that their victory is only partial, as other dem­ands are still pending. But what has been achieved is a victory nonetheless.

What are the key takeaways from this movement?

This movement was successful on five planes. First, they managed to maintain the unity, not only of the farmers but also other sections of soc­iety for such a long per­iod. They were able to see through the numerous ploys, some of them really vicious, employed by the ruling dispensation. Second, they were able to target the right people. Take the call for the boycott of ‘Ambani-Adani’ as an example. This was of historic importance. Very few political entities have so far targeted the crony capitalists who are act­ually dominating the polity and economy. But they revived the boycott movement of the freedom struggle. Third, they were also successful in intervening in the political sphere, such as the ‘no vote to BJP’ call, their campaign in West Bengal ahead of the ass­embly election, and gherao of leaders supporting the laws in the strongholds of the movement in northern India. Fourth, they consciously tried to bridge the social gap between the Jats, Muslims and the Dalits. I do not know what ext­ent they have succeeded in this, but a conscious effort on the part of the leadership was visible. And fifth, the way they dealt with the media. The mainstream media completely blacked them out and even vilified them. But they came up with their own, alt­ernative media outlets. 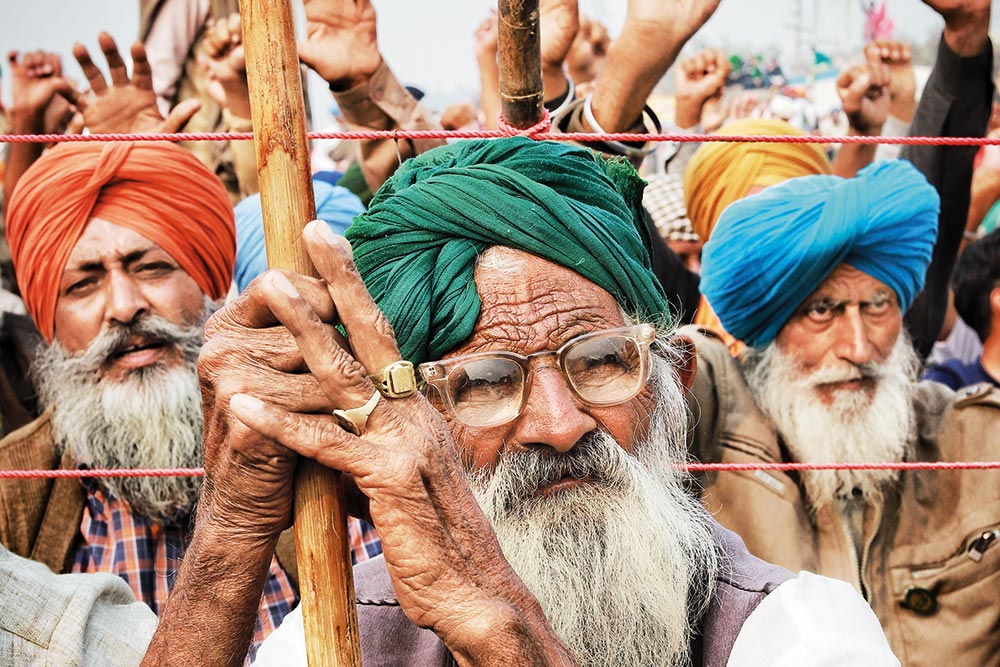 Violence as a mode of protest has remained a matter of deb­ate since the freedom struggle. Post-Indepen­dence, India’s left movement suffered major splits on the question of violence, or ‘counter-violence of the opp­ressed’ in their words. What is your take?

In India’s struggle for Independence, I think both streams contributed, apart from international developments. One crucial difference I see regarding the transfer of power is that the peaceful stream was more collaborative with colonial powers in economic terms, while the militant stream (such as Subhas Chandra Bose’s Indian National Army) could have taken more radical steps to make India truly free from foreign exploitation. Having said that, I think the question of violence is irrelevant in a discussion, because the rulers have been ruthless worldwide. About 1 lakh Sikhs laid down their lives for the British empire during WWI and the British rulers responded to this sacrifice with the Jallianwala Bagh massacre. Forget this direct violence, isn’t death by starvation violent? Can’t you see violence in hunger and poverty? Tortuous deaths are happening due to ruling class policies ever since Independence. So, I think, in any struggle, the question is how to win and what is the best method to do so. Viol­ence or non-violence is a non-issue.

But doesn’t the success of this non-violent movement in the context of the armed movements going on in different parts of the country offer a message to the stream which believes in ‘counter-violence’?

I think the struggle for the constitutionally granted rights of the people is very important at this point. The rights that are already there, granted by the Constitution, but are not being implemented by the rulers. Certainly, this is not the time for any kind of violence. Not for any ethical concerns, I alr­eady said, the debate is irrelevant, but because it’s not a viable option.

This movement was not led by the Left, though many leftist organisations were part of it. What do you think are the principal lessons that India’s Left can draw?

There is not much to learn on the ideological front but it offers lessons on the tactical front, such as the boycott of crony capitalists which can be extended to other movements in their own contexts. The BJP and the RSS talk a lot about swadeshi and Atmanirbhar Bharat. But I think the Left can possibly gain by reviving the Swadeshi and boycott movement of the freedom struggle. It can bec­ome one of the most powerful modes of protest. It speaks very poorly of the maj­ority of India’s Left that they have not been able to hit big corporations the way the farmers’ leadership did it with confidence.

Apart from the three farm laws, the Centre also brought in 3 labour code reforms sim­ultaneously. But little has been heard of trade union movements against this?

That is because with the int­roduction of the neo-liberal policies in India in the 1990s, permanent workers have been replaced by contractual workers. The contractualisation of the workforce subsequently paved the path for the weakening of the workers’ unions, which now appear completely disarmed.  At present, the workers’ movement is very weak and I see no hope of any such movement succeeding against the lab­our codes, even though the labour codes are perhaps even more vicious than the farm laws. They increase exp­loitation of the workforce manifold. But the handful of permanent workers do not want to get into trouble and the sea of contractual workers have no job security. There will be agitations against privatisation but I do not think these are going to succeed. Left seems to have a lack of und­erstanding on the changing relationship between capital and labour and the implications of contr­a­­c­tualisation. 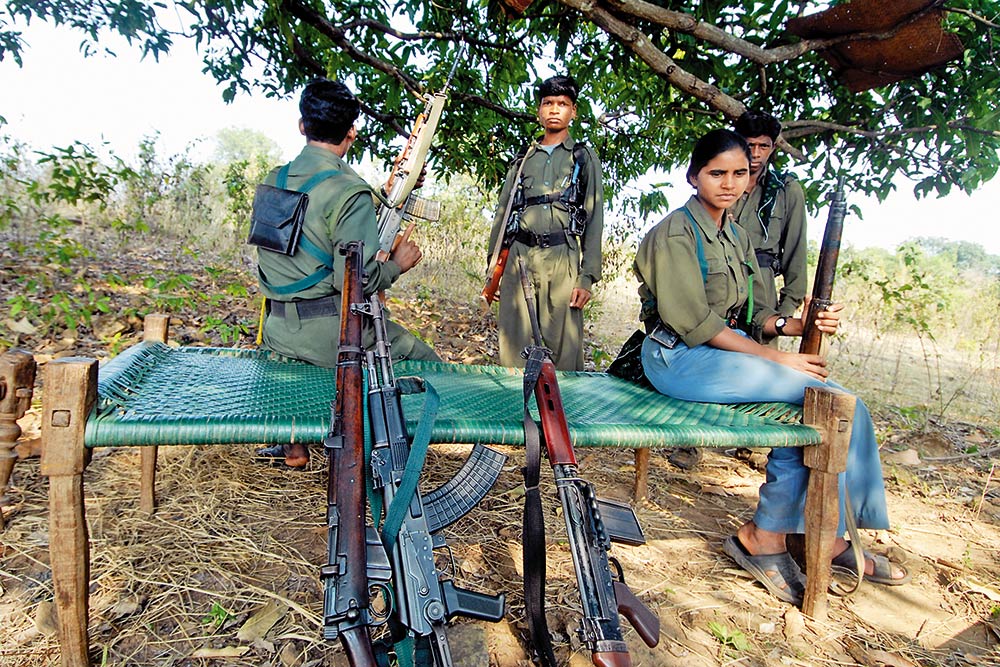 The Naxalite movement was based on the idea of an armed agrarian revolt. Five decades later, where do you see Indian farmers standing?

The two movements are characteristically different. The Naxalite movement concerned itself more with the question of land, whereas this movement happened as a result of a crisis introduced to the agriculture sector by market economy. In the Naxalite movement, the participants were mostly poor farmers. Here, big farmers, the beneficiaries of the green revolution, took the lead, while small farmers also joined in. This is because now even the big farmers are feeling threatened by the government’s policies and are scared of a corporate takeover of the farming sector. This reflects the state of desperation in India’s farming community. Just look at the staggering number of suicides of farmers since the mid-1990s. It started with the introduction of BT cotton but now farmers are committing suicide even in non-cotton areas like Satara and Nasik. The crisis is even bigger in the non-MSP sector. And remember that crops enjoying MSP support make up only 6 per cent of India’s agriculture sector. In one of the pamphlets published by the supporters of the anti­-farm law movement, I read that following the World Bank’s prescriptions to move 400 million people from the rural to the urban areas by 2015, successive Indian governments have systematically squeezed public investment in the agri­cultural sector and imp­overished the farmers by denying them a fair rate or price. The National Skill Development Council stated in 2015 that its aim was to red­uce the agricultural workforce from 57 to 38 per cent by 2022. There is a conscious plan to force the farming community to look for ind­ustrial work in greater numbers to create abundance of cheap labour for industries.

Do you think the Naxalbari-style armed movement still remains relevant in India, in some parts at least, since the disparity in land ownership has not changed much?

It does not seem to be sustainable. Given the history of all such types of armed movements, and the present movement in India, I don’t know if it’s viable. The Columbian struggle has surrendered after 50 years. The last place standing is possibly the Philippines, where too the movement is just marking time; it’s neither growing nor dying. In India, when I was arrested in 2009, they (the police) said there existed a Red Corridor, which apparently made prime minister Manmohan Singh panicky. But that corridor hardly exists today. That movement, too, has dep­leted. I would like to reit­erate that the present farmers’ movement has demonstrated the power of non-violent mode of protests and there is a lot to learn from it.

You have been highlighting that Leftist ideology has lost the appeal it enjoyed some four-five decades ago despite the situation becoming more fav­ourable for a revolution, at least theoretically, due to the massive increase in wealth inequality. Why do you think this happened?

I have written in the third chapter of Fractured Freedom that the Left, globally, failed to deal with the three questions: of value system, freedom and happiness. If we fail to imbibe the values of goodness such as selflessness, modesty and straightforwardness, we would not be able to attract the youth bec­ause they will see here the same intrigues, groupism and rivalry. If the changes desired in the society are not taking place int­ernally among the individuals within an organisation, especially among the leadership, how can that org­anisation bring in those changes in society? Besides, there was considerable idealism in the world in the days when we joined the movement. With neo-liberal policies, came aggressive consumerism and extreme individualism. These have led to a loss of idealism among the youth. But questions like why did the masses so easily choose a free market over freedom from want have not been dealt with.

In India, earlier we could cite Soviet Russia or China as socialist societies. But post-1990s, communism lost its appeal, with the Soviet Union collapsing and China turning capitalist.  There is no global example to cite and we have not taken from the non-Brahminical trends that existed right from the time of the Charvakas, and the Bhakti and the Sufi traditions of the later years, to cite a few examples. The non-Brahminical trends highlighted a much higher value system. But the Left in India has failed to Indianise Marxism and make any major breakthrough in the theoretical sphere.