Once a haven for the Royal Bengal tiger, it had as many as 132 in 2002, the numbers have alarmingly dwindled over the years. At last count, Odisha have only 28 tigers 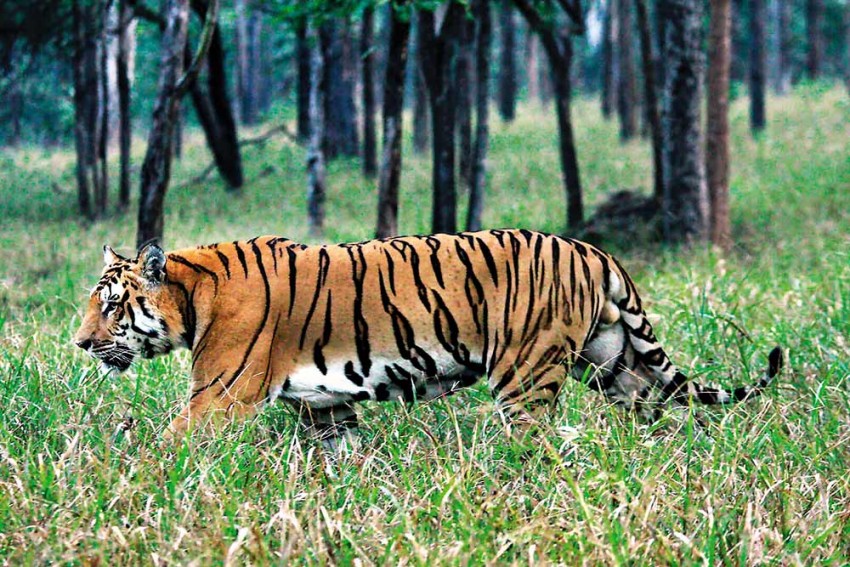 The mighty roar is now a mere whimper in the forests of Odisha. The Royal Bengal tiger, once lovingly described by writer-conservationist Jim Corbett as a “large- hearted gentleman”, is waging a grim battle for survival in the state. The latest tiger census estimates the number of big cats in the state at 28, the same number reported four years earlier. In contrast, the all-India growth in tiger numbers is 33 per cent, with nearly 3,000 counted across the country in the 2018 census. States like Madhya Pradesh and Maharashtra rec­orded spectacular growths of 71 per cent and 64 per cent, according to data released by Prime Minister Narendra Modi on World Tiger Day, July 29.

For Odisha, the dwindling numbers are hard to swallow since the state was once a haven for tigers—in 2002, it had as many 132 big cats. It is also the state where Saroj Raj Choudhury, its first conservator of forests, launched the then revolutionary method of counting tigers through pug marks in 1966. The method has since been replaced with the internationally-accepted ‘camera traps’ and scat sampling. The Similipal Tiger Reserve, the largest in the state, lost as many as 75 tigers between 2006 and 2016 as per the Odisha government’s estimate. But no accountability was fixed on forest officials despite the fact that the state spent more than Rs 25 crore on tiger protection during this period.

One of most publicised cases of tiger deaths happened in 2018 when a three-year-old male died within three months of its translocation from Madhya Pradesh to the Satkosia Tiger Reserve­—as part of the country’s first inter-state tiger relocation programme. Though reports of tiger poa­c­hing is rare in the state, Biswajit Moh­anty, the secretary of the Wildlife Soc­i­ety of Odisha (WSO), fears the worst. “Since there were 28 tigers in Odisha in 2014, what happened to the newborn tigers which would have been more than one year? The state should have added at least 12 to 15 tigers over the past four years. There are several good tiger habitats in Odisha, which can sustain up to 300 tigers. The only reason it is as low as 28 is rampant poaching,” he tells Outlook. Tiger census ignores cubs less than a year old as their survival is uncertain.

The dwindling numbers are hard to swallow since Odisha was once a haven for tigers—in 2002, it had as many 132 Royal Bengals.

Ajay Mohapatra, principal chief conservator of forests (wildlife), however, feels poaching is just one of the reasons. “It all depends on the predator-prey rel­ationship. If the prey base declines, the number of predators too would dec­line. The number of predators could also come down because of the fragmentation of habitats. There is a fall in absolute numbers also when the rate of death is higher than the rate of birth,” he says.

The earlier tiger census had led to friction between the state and the Centre with Mohapatra’s predecessor S.S. Srivas­tava questioning the National Tiger Conservation Authority’s 2014 figure of 28. Shortly after the report was released in January 2015, the Odisha government had carried out its own census and came up with 42 tigers. Some wildlife experts of the state have even now questioned the figure of 28 quoted in the latest report and expressed serious misgivings about the method adopted by the NTCA. “The camera trap way of counting tigers is very confusing. I think the tried and tested pug-mark method, which was Odisha’s gift to the world, was more trustworthy,” says well-known wildlife expert Lala A.K. Singh. But Mohanty differs.

Even as experts fight over the methods, one thing is beyond question—Odisha is no more the tiger safe haven that it was a few years ago. And if urgent steps are not taken to protect the remaining big cats, the magnificent animal will be confined to the bagha nacha—the state’s traditional dance form which is testimony to the tiger’s close relation with the people of the coastal state.