The BJP, hankering for a credible ‘insider’ in Bengal, counts on Mithun Chakraborty’s demotic pull 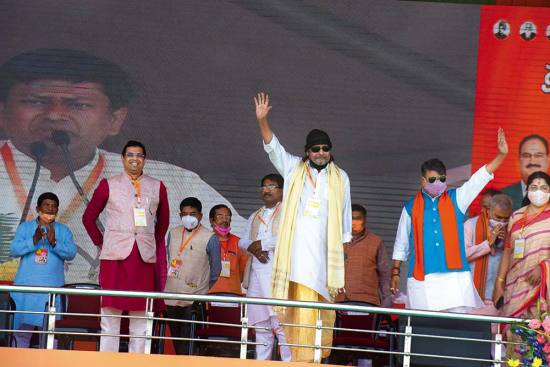 Place: Calcutta’s Brigade Parade Ground, known for its amphitheatrical ethos, with a tradition of mighty political grandstanding, on March 7. Dramatis personae: PM Narendra Modi, other top BJP leaders and Mithun Chakraborty. Audience: Tens of thousands of BJP supporters. “I know you are waiting to hear that dialogue from me…maarbo ekhaney, lash porbey shmashaney (I’ll hit you here and you’ll land in the burning ghat)…that will continue, but I am giving you a new one now,” Mithun Chakraborty said. “Do remember this dialogue,” he continued after a pause. “I am summing up all that the senior leaders said so long…and the dialogue reflects me, Mithun Chakraborty. I do what I say. Ami Joldhora-o Noi, Balibora-o noi, ami jaat gokhro. Ek chhobolei chhobi. Hya, ebar etai hobe Banglay.” That bloodcurdling line means, “I am neither Joldhora nor Balibora (non-venomous snakes); I am the real cobra. Just one bite and you’ll become a photograph. Yes, that’s what going to happen in Bengal this time.” The crowd burst into wild cheers. The presence of the ever-popular Mithun—clad in the traditional Bengali attire of dhuti-panjabi (kurta)—in the high-profile rally was touted as its prime attraction.

A few minutes after Chakraborty’s cinematic delivery, PM Modi’s speech revealed what triggered the BJP’s enth­usiasm over getting Chakraborty to their fold. “Today, we have Bengal’s son Mithun Chakraborty with us,” Modi said, clearly attempting to counter Trinamool Congress’s campaign branding chief minister Mamata Banerjee as ‘Bengal’s own daughter’.