Minister of Petroleum and Natural Gas, Dharmendra Pradhan, speaks to Outlook about developments in volatile West Asia, the diversification of India’s energy basket and how India has emerged as a sought-after energy market. 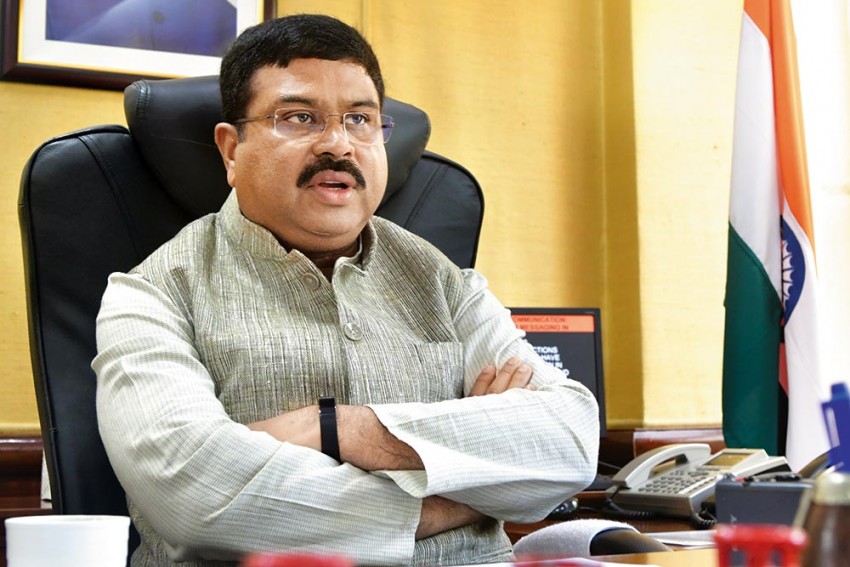 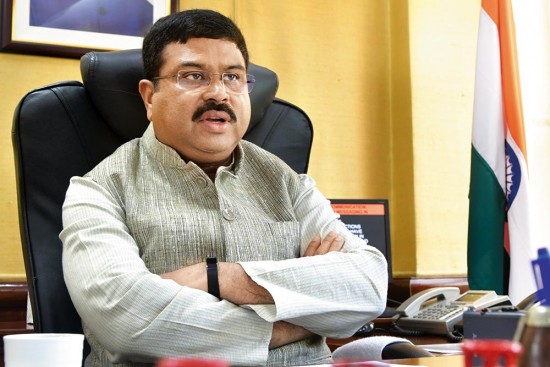 In his first, detailed interview on some critical issues since assuming office in his second term as petroleum and ­natural gas minister, Dharmendra Pradhan speaks to Pranay Sharma about developments in volatile West Asia, the diversification of India’s energy basket, and how India has emerged as a sought-after energy market for foreign investors and entrepreneurs. Excerpts:

How worried is India over the recent drone attacks on ARAMCO installations in Saudi Arabia?

It is a serious issue and we are keeping an eye on the developments. But there is no disruption in our supply. I had a detailed discussion with my Saudi counterpart, Prince Abdulaziz bin Salman regarding the crisis and the incident. He assured me about the supply and there has been no disruption of crude oil supply from Saudi Arabia to India.  Both Saudi Arabia and ARAMCO are important for our crude oil requirements but India now has a much diversified basket. We import crude oil from Iraq, UAE and Nigeria as well as from the USA. So we are not worried or concerned over this incident. We are assessing the entire inventory assessment of crude oil.

But after Saudi Arabia cut down on its oil production by 50 per cent following the attacks there was a sudden in prices of crude oil by nearly 20 per cent. How does a country like India deal with such vulnerabilities?

Analysts say this is one of the major disruptions in the last five decades. So we were expecting the price to be much more than what it reached. When I took charge in 2014 there was a crisis in Iraq and crude oil price shot up from 75-80 to 100 and 110. If I compare that situation with what happened now there was only an $8 hike for two days. Now it is in the decline mode. This has to do with demand and supply; it is not a sentimental issue. I cannot deny that it is a major disruption and has its geo-political as well as its economic impact. But despite such things, the reality is that today there are more suppliers in the world and consumers have a choice to opt for a different source. That is a natural balance between demand and supply.

So there is a wider option?

Reports suggest India is now looking at Russia as an important source for its crude supply in the wake of the Saudi attacks. Is this a temporary measure or is it more permanent in nature?

'For the past five years, PM Modi has been directing us to ­diversify the source and nature of energy.'

It is wrong to put it this way that we are looking at Russia after the attacks. I was in Russia one month back. Prime Minister Narendra Modi visited Vladivostok before the attack. At the meeting of the Prime Minister India had agreed to get crude oil directly from Russia’s eastern route—Vladivostok to Chennai directly. The issue was discussed between Prime Minister Modi and President Vladimir Putin. Russia is important for our energy needs and we also have a special strategic relationship with it. We are its most favoured destination for oil and gas in Asia. They are investing in our energy market. Rosneft has invested in a big way in one of our refineries. Our interests are inter-locked and we are keen to import Russian crude and also the equity oil that we have in Sakhalin to the country.

So Russia has been part of this diversified basket?

Yes, because consciously for the last five years when Prime Minister Modi took charge and due to his visionary leadership and understanding of geo-politics, he had given us the direction to diversify the source and nature of the energy. These two formulae or these two fundamentals makes Russia a strategic destination for us as is America.

Since Donald Trump withdrew from the nuclear agreement with Iran and re-imposed sanctions there has been attacks on ships in the Gulf and now the attack Saudi Arabia’s ARAMCO. What kind of scenario do we see emerging from the Gulf?

Just before the attack, I had been to Saudi Arabia, UAE and Qatar. Now we have to accept the geo-political condition and live with the changing scenario and condition. I think economic interest will go up, it will carry forward. Apart from the conventional geo-political challenges, like two or three decades ago these developments would matter in a big way. But with new innovation, new energy source and new business models, while energy requirement is increasing, a country like India has also become the new energy destination for the world energy investors and entrepreneurs. So that way we have to accept the new changing scenario. To me, these are the new normal. But I am confident we will fulfil our energy requirements.

How dependent are we on Iran for our oil and gas supply?

We are taking oil from Iraq; we are not taking oil from Iran. But we have made conscious efforts to diversify the source and the nature of the energy. India is one of the pioneers that has positioned itself with 75 Giga Watt of renewable energy and by focusing on ethanol, bio-diesel, compressed bio-gas, sources of all which is not primarily fossilized but from sources that is available within our country. We are also looking at wind,  solar and other alternatives. India is a country where a lot of work is going on in the laboratories on hydrogen fuel and other alternatives. We are not only looking at our energy requirements of today but also that of our future. Our IITs, leading institutions as well as our companies that are into energy and power, are working and spending huge sums of money in developing new technologies and software on hydrogen fuel and related issues. Prime Minister Modi has been stressing that we must have sufficient energy for our citizens.

What about India’s oil supply from the United States, hasn’t it been going up steadily?

Yes, they are. But a lot of people fail to realize that India is a huge energy market today and a lot of producers are looking at us. They continue to talk the narrative of the 70s and 80s, the scenario has changed drastically. When our Prime Minister travels to different parts of the world he is recognized as a powerful, global leader. The Indian diplomatic era has changed. It is the era of market, it is the era of business and economics. Today only India can provide a stable market in the world. So the rule of the game has changed. People are depending on us. In all the verticals of energy—whether it is coal, gas, variables, scientific innovations, all are eyeing to get a bigger slice of the Indian market. They are all dependent on the Indian market and I am confident of giving energy justice to my people. My Prime Minister is very confident on that issue.

China, Japan, South Korea all these are also major energy consumers of the world. Where does India stand in that list?

The government has allowed 100 per cent FDI in the energy sector. How much FDI have you been able to attract so far?

Since the 1990s the Indian government had opened up 100 per cent FDI in the oil and gas sector, especially in exploration. Today we have FDI in different areas from a number of leading companies in the field. British Petroleum, Rosneft, L.N. Mittal, Vedanta Resource and several other global companies have invested in a big way in different areas of the energy sector and companies like Total have also shown interest to invest in it. Aramco has already invested in Reliance. They are all eyeing the Indian market in a big way. If we put all of these investments together it is a substantial amount of FDI that has come in the oil and gas industry.

But in addition to its investment in Reliance isn’t ARAMCO investing with ADNOC in a separate refinery?

But the project ran into some problem over availability of land. Is this likely to be a recurring problem for future projects in India?

There is no problem over the proposal now. The problem which was there earlier has been fixed. Now two groups of society in Maharashtra are competing with each other to get the project in their area. So the days of problem are gone and today there is completion between different groups over attracting such projects.

Are you getting proposals from many such big companies for other joint venture projects in the country?

During the Prime Minister’s recent visit in the US, one of his first meetings was with CEOs of energy verticals. There is no energy entrepreneur in the world who is not looking at India. Be it the technological company or the mid-sized company, the logistic company or equipment manufacturers all are looking at the Indian market space. We are facilitating them by giving them tax relief and incentives not only to the existing ones but also to the new and upcoming industries. Such welcoming steps from the government are making a lot of people interested in the Indian energy industry.

You had been talking of setting up bio-CNG plants not only meet people’s energy requirements but also generate employment. How has that progressed so far?

We are interested in meeting our energy requirements from raw materials that are available domestically. Our government’s aim is to help farmers to also become energy producers. The waste from surplus food grain and the rotten food grain will be converted into energy. So can the urban and forest waste. Government has given guarantees for all kind of bio-products, second generation ethanol or bio-diesel or bio-gas. We have given policy guarantee and business certainty as well as optic guarantee. You can produce as much as you want. The biggest incentive has been the optic guarantee given by the government. After this, a lot of people are coming forward to do business under this model.

Realistically speaking, you think this will work?

It is already on ground and working. When we took charge our ethanol procurement was only one per cent. We will soon be touching nearly 10 per cent. We are spending over Rs 10,000 crores to set up eleven plants of second generation ethanol. Four of them have already started working in the field. With optic guarantee for used cooking oil’s conversion into bio-diesel we have started procuring used cooking oil from nearly 100 cities in the country. Many companies are jointly implementing this programme. Our target is to put 5000 compressed gas plants converting all the bio masses. All the waste can be methanized and from that methane we can produce bio-compressed-gas which can be used in the transport sector and also in the industries. Nearly 500 companies have already shown interest in these plants. We have been providing them with LOI and banks are providing them with finance. Almost all state governments are interested and cooperating in this programme with us. Three plants—two at Maharashtra and one at Haryana—have already started producing bio-compressed-gas. These are no longer at the discussion level or at the theoretical stage. They are all on the ground and implemented for a green generation.

Gandhi@150: How Dissent And Tolerance Co-exist In Gandhi’s World