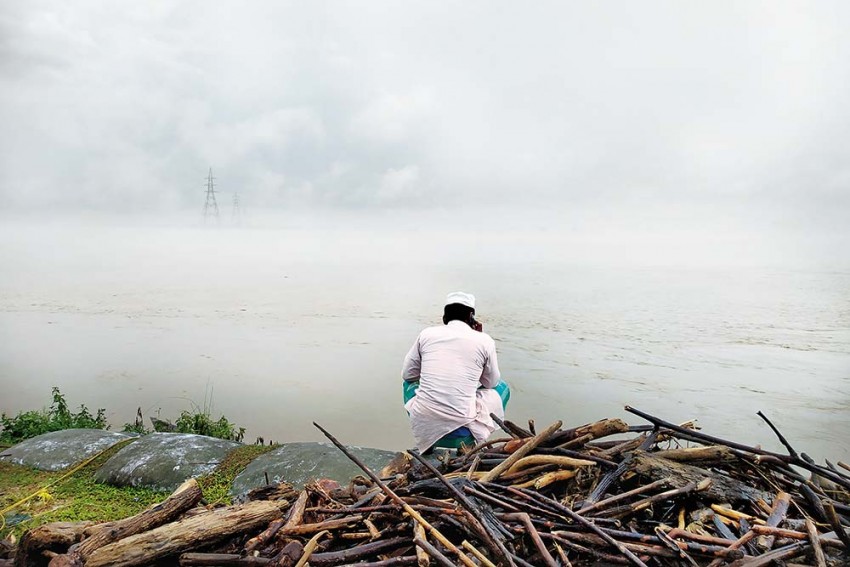 On The Edge
A man speaks on the phone on the banks of a rain-swelled Beki river in Barpeta district
Photograph by Surajit Sharma
Anupam Bordoloi September 04, 2019 00:00 IST Even Hindus Are 'Illegal Immigrants' in Assam's Ambitious National Register Of Citizens! BJP On Backfoot? 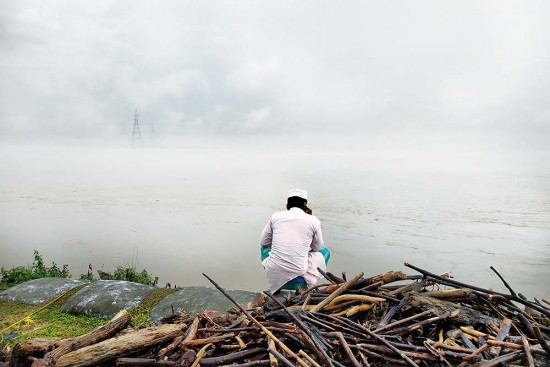 Some stories remain unfini­s­hed; the plot goes awry, the end falters, the twist in the tale never comes.  But still it makes for fascinating reading. Like the story of the NRC in Assam—nearly 35 years in the pipeline and four years in the making. Yet, when the “end” came on August 31, it app­eared that the contentious National Register of Citizens has only found a new beginning. The cast and characters remain the same, but the plot is likely to change. “I rem­ember a line from the Pirates of the Caribbean...‘nothing personal..., it’s just good business’. The NRC and the issue of illegal migration are just like that...so many shops run on these iss­ues; for political parties, organisations and gro­ups...the show must go on for them,” says a school teacher in Guwahati who identified himself by his first name, Abhijit.

The sense of cynicism and bitterness are not his alone in Assam today. And therein lies the crux of the entire issue. Within hours of the publication of the final NRC list, identifying just over 1.9 million people as suspected foreigners, the NRC turned into a pariah for many, most of them vocal supporters of the exercise till the last moment. They suddenly discovered that the long, winding process to identify “illegal immigrants” in the state was, after all, too faulty to throw up a true picture of the so-called “demographic invasion”, which was at the root of the awakening against illegal immigration in the late 1970s.

That the NRC’s going to be all about numbers was never in doubt, right from the moment the Congress government at the Centre led by Rajiv Gandhi agreed to update the citizens register of 1951 and incorporated the clause in the 1985 Assam Accord. Suc­cessive Union governments, mostly of the Congress, sat on it. The BJP accuses the Congress of not carrying out the exercise to avoid antagonising its Muslim vote. The logic was simple. A state bordering Bangladesh must primarily have Muslim immigrants. It was with this argument that the BJP government rushed ahead with updating the NRC. But the story alw­ays doesn’t follow the plot, not with millions of characters in it. As data from the final draft NRC and a subsequent exc­lusion list was published—that had more than four million people as suspected foreigners—and analysed, it bec­ame apparent that more Hindus could be left out of the final NRC than Muslims.

And so, even before the final list was out, the BJP disowned the exercise and began hinting about alternative, legislative measures to undo the NRC’s flaws. Assam BJP legislator Dilip Kumar Paul is certain that  Hindus can never be foreigners in India. “Around Rs 1,300 crore has been utilised in the entire process and we want an error-free, foreigner-free NRC…95-96 per cent illegal Bangladeshi Muslims’ names have appeared on the list. We guess that many Hindu names are out. Those who are foreigners became Indians and those who are Indians became foreigners,” Paul says. These are only conjectures as a religious break-up of the excluded names is yet to be made public. The BJP’s stand is not surprising as giving shelter to “persecuted Hindus” has been a known party position and the basis for the Modi government’s attempt to bring in the citizenship amendment bill early this year. Though the bill, which aimed to ease citizenship norms for non-Muslims from neighbouring countries—was not tabled in the Rajya Sabha because of violent protests in the Northeast, it is likely to be re-introduced now that the BJP-led government has pushed through a spate of legislation in the Upper House.

What has come as a surprise is the rea­ction of the Assamese organisations, inc­luding the All Assam Students’ Union (AASU), which had led the six-year ant­i-foreigner agitation in the 1980s. “This number is not even close to what the Union and state governments often declare,” AASU chief adv­iser Samujjal Kumar Bhattacharya says. Assam Public Works (APW), a group that moved the Supreme Court in 2009 seeking deletion of foreigners’ names from the electoral rolls, expressed dissatisfaction and vowed to approach the apex court again. “We demand re-verification of the numbers,” Abhijeet Sharma, head of APW, says.

For those left out of the NRC, there is not much anger or dejection, but a sense of déjà vu. “We are sure that our names will be included some day. It is not a question of how, only when. But we will have to go through a long process and that’s frustra­ting,” says Manju Devi, 54, granddaughter of freedom fighter Chabilal Upadhyay. A member of the Gorkha community, Manju was tagged as a doubtful voter many years ago and since then struggled to prove her citizenship, though her husband’s name is in the NRC. As a corollary, her son and daughter are not on the list. According to the Bharatiya Gor­kha Parisangha, the apex union of the community, the number of Gorkhas left out of the NRC could be as high as one lakh.

The story gets more interesting. The All India United Democratic Front of Badaruddin Ajmal—one of the harshest critics of the NRC once—supports the final list as authentic. But for those left out, it is the start of a new story, a long journey. “How many times do I need to go to the courts and offices to prove that I’m an Indian. I had submitted my father Nur Mohammad Ali’s mother’s legacy data of 1951 NRC. It’s tiresome,” says Rekha Begum, 35, a domestic help in Guwahati. All her family members have been included, including her parents, siblings, husband and kids. “My kids think I would be sent to a detention centre.” And so it goes, a story with no end.

By Anupam Bordoloi in Guwahati