The pandemic and the job cuts that came with it led to a double exclusion of the dalits, who anyway have limited options for employment

More from Sukhadeo Thorat
View All

Dalits, who persistently faced social exclusion on account of unto­uchability,  are now conf­r­o­n­ted with another form of social distancing and isolation in the wake of Covid, making them victims of double exclusion. The first wave of Covid saw further exclusionary behavi­our practiced with the already excluded, discri­minated and marginalised safai karamcharis (who were subsequently recognised as frontline health workers), blaming them for spreading the infection, rather than thanking them for risking their lives to clean public spa­ces, collect and dispose contaminated and non-se­gregated garbage and waste. In addition, among all those who suffered from negative economic outcomes of Cov­id, we have reason to believe that Dalits and sim­­i­lar groups suffered the most. Their econo­mic standing already suffering from high levels of unemployment, predomin­a­nce of informal work, with significantly lower job and social sec­urity support, lower levels of earning than the average, and therefore low levels of consumption expenditure, combined with low rates of saving to fall back upon—on the eve of a hurriedly dec­lared and unplanned lockdown of the country and economy—saw them completely unprepared for the tragedy that was to unfold.

Even when all of humanity was united in facing a common danger, this did not stop them from facing newer forms of discrimination, as was seen in earlier national emergencies such as the 2004 tsunami, caused by the Sumatra-Andaman earthquake of 2004, and the Latur earthquake in Mah­a­rashtra and Gujarat. Rather than being viewed as equally suffering from these natural calamities, or in most instances much more than the rest due to their existing disadvantages, they continue to face differential treatment in accessing aid, help and humanitarian support, as was documented by many studies and NGOs providing relief. For ins­tance, in the aftermath of the Latur earthquake, high castes had refused to live in houses built for all by the government, due to their close proximity to those of Dalits, as a result of which the Mah­arashtra government had to rebuild houses for Dalits in a separate location.

A fact check of the pattern of (un)employment, job and social security, wage earnings, financial savings and the experience of caste discrimination, would  show how disadvantaged they were economically and with respect to social capabilities, on the eve of the closure of the country and economy on the evening of March 24, 2020. An exc­eptionally high proportion of them were (and still are) engaged as informal workers. This mea­nt the near absence of access to existing jobs and social security, low or no incomes, and not much savings to fall back upon, instead having to eat into them. This also meant they faced an immed­iate danger of hunger and health risks. Besides, giv­en the discrimination in hiring, they were probably the first to be fired and last to be re­employed, with discriminatory access to health services compounding their miseries.

The non-farm workers were affected the most. Of the total workers, about half are employed in non-farm wage work (regular salaried/casual wage labour). Of these, about 70 per cent are inf­ormal wage workers, without any job and social security. However, the magnitude of informal workers was highest among SCs at about 84 per cent, higher than the 70 per cent for STs and OBCs, and 54 per cent for high castes. The share of regular salaried non-farm workers, who were most affected, was 63 per cent for the SC, which is also higher than 50 per cent for high castes, 60 per cent for OBCs, putting the national average at 59 per cent. These most insecure workers were concentrated in the lower income quintile, mostly engaged in non-farm agricultural sector, construction and in elementary occupations.

This shows their predominance in less secure jobs, with hardly any social security provisions. A high proportion of salaried SC workers were eng­aged in insecure jobs. In 2018-19, at an all-India level, nearly 85 per cent of the total wage workers in the non-farm sector were without any contracts or with contracts that were for less-­than-a-year periods. The share of such wor­kers was highest among the SCs (89 per cent), followed by STs (87 per cent), OBCs (86 per cent) and high castes (76 per cent). The percentage of those with access to one social security measure was the lowest among SCs (16 per cent), compared with high castes (22 per cent). The average daily wage earnings of salaried SC informal workers was also Rs 269, lower than high castes (Rs 357), OBCs (Rs 307) and the national average (Rs 315). Simi­l­a­r­ly, the average earnings of casual SC wage labourers was Rs 311, compared to Rs 331 for high castes, Rs 347 for OBCs and the national average of Rs 325.

Low wage earnings result in lower consu­m­p­tion expenditure on food, heath and other necessities. The average monthly per-capita consumption expenditure in 2018-19 (based on employment survey data) was Rs 1,717 for SCs, which is lower than Rs 2,720 for high castes, Rs 1,960 for OBCs and the national average at Rs 2,075. Low incomes imply malnutrition, high child mortality, high anaemia among women and children—all of which is corroborated by data. Further, with subsistence income, their savings would be low. The Debt and Inv­e­stment Survey of 2013 shows that the average financial saving per household was Rs 24,013, much lower than the nat­ional average of Rs 50,122, which incl­udes a high Rs 57,362 for high castes and a low Rs 20,631 for OBCs. 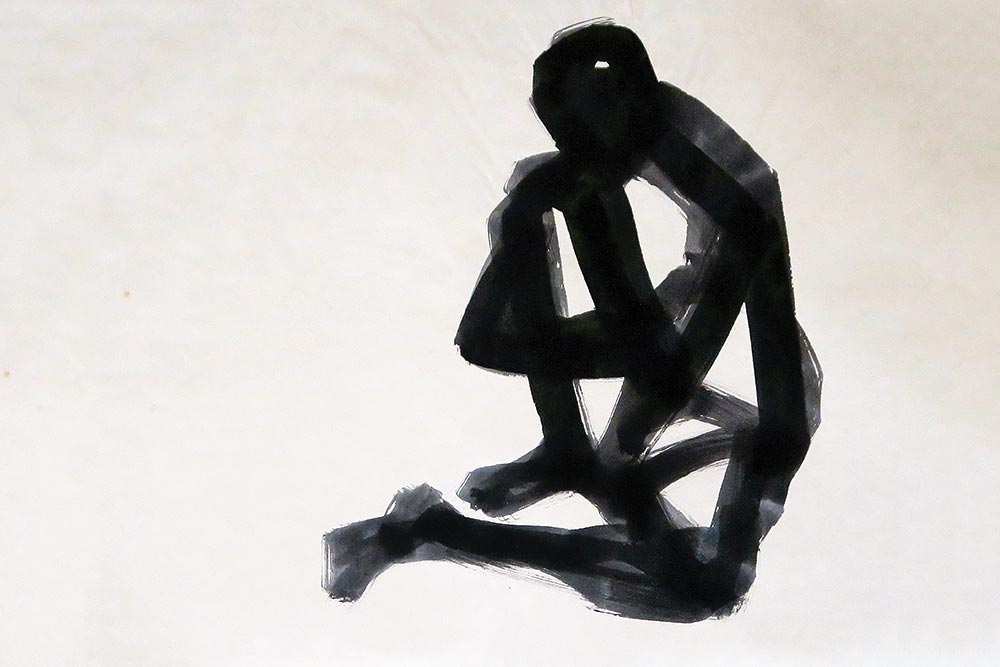 From the series ‘Eye Line’ by Samit Das

It is with these handicaps, insecurities and vulnerabilities that they were faced with the unrelenting waves of the Covid pandemic and lockdowns. If past experiences are anything to go by, discrimination in the private sector in hiring, wage rates, job allocation, etc., would not only continue, but get worse in times of limited access and supply constraints. An in-depth telephonic survey of 30 individuals in Delhi and Bihar found that Dalits faced discrimination as they were denied money, food, medicines, groceries and other essentials by shopkeepers and moneylenders, in the face of dwindling stocks and interrupted supplies.

Given these pre-existing disadvantages, it is not difficult to imagine that during the national and economic lockdown due to Covid, while all workers in the informal sector suffered, Dalits would have been the last ones to have gained access to any available work, due wages, re-employment, credit etc in the face of existing discrimination. This would have led to lack of access to adequate quantities and quality of food, medicine, etc. Many children have had to drop out from studies to help their parents to either work in their far­ms to grow food, or find other work locally.

What was needed in Budget 2022 was cash transfers along with employment generation to give these workers an income, by launching projects under public employment schemes like MNREGA for urban youth and by not cutting the MNREGA allocation for rural belts. This wou­ld have improved demand, reviving the unutilised capacity of the private sector, thereby helping the economy to grow as well. The budget should have had at its core a growth strategy that was demand-­driven through employment generation and inc­o­me transfers, as it would not only help the dep­­­ri­ved and the people recently marginalised by Covid, but also help increase demand in the economy and stimulate growth. Unfortunately, that did not happen. Now these groups have to wait for the supply side to kick in and increase employment and income availability, in order to rebuild lost savings, assets, health, nutrition and education of their children.

The most telling and haunting memory in this regard was the televised images of men, women and children walking hundreds and thousands of kilometres to return home. It was shocking to see citizens of a free India exploited as casual labour at any deemed wage, without any rights and obligations of the State to provide them with transportation, food, water, healthcare, cash-in-hand and a safe passage back home. The hordes of labourers and their families walking back looked more like manifestation of Marx’s reserve army of labour, ready to be exploited as and when they are desperate to seek work, with no humanitarian concern and support of the State.

(This appeared in the print edition as "No Place Called Home")

Amit Thorat is assistant professor of economics at JNU