At OutlookSpeakOut’s ReImagining Odisha, the participants, ranging from union ministers, to intellectuals, industrialists, thought leaders and artistes, shared their vision for Odisha and what can be done to realise the aspirations. 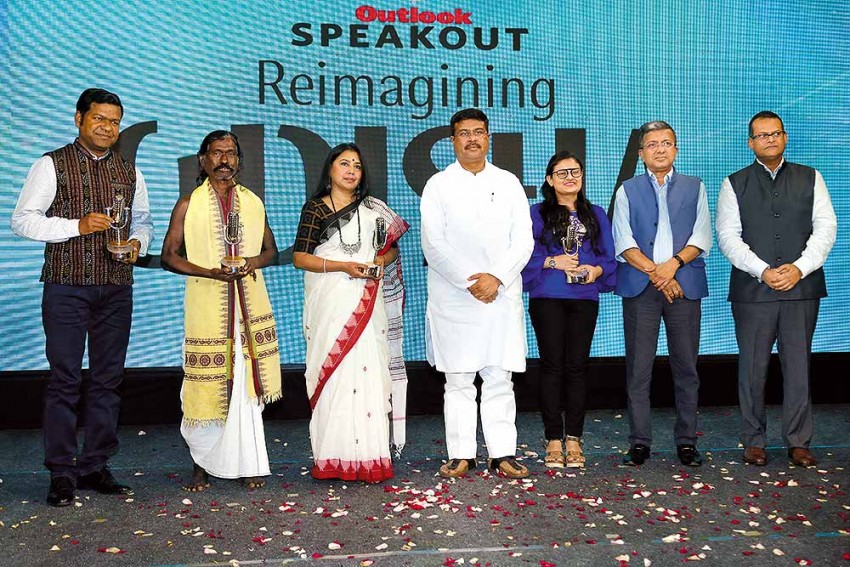 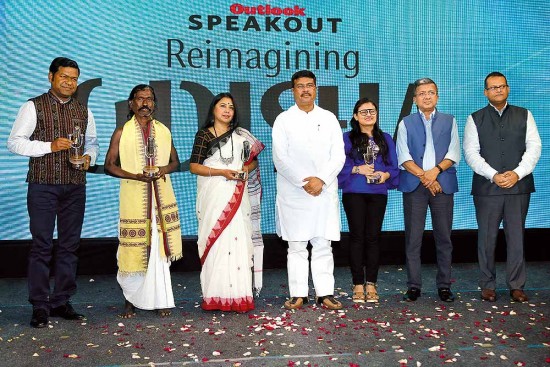 It was an eclectic gathering, but the goal was one: to reimagine and reinvent Odisha­—to help the picturesque eastern coastal state tap its full potential and reach for the skies. At OutlookSpeakOut’s ReImagining Odisha, held in Bhubaneswar on March 3, the participants, ranging from union ministers, to intellectuals, industrialists, thought leaders and artistes, shared their vision for Odisha and what can be done to realise the aspirations.

Senior BJP leader and Union petroleum ­minister Dharmendra Pradhan, who felicitated six Odisha icons at the event, said the state has the potential to become the hub of Southeast Asia, like it was in earlier times. Expressing his gratitude to Outlook for hosting the event, Pradhan said, “The people of Odisha are poor in economic terms, but rich in terms of ­int­ellectual property. That is our greatest strength.  We have the skills. That’s why Odia artisans and sculptors are known all over the world. There were no kings during the Kalinga war. But Odias didn’t accept defeat. They made Emperor Ashok kneel and change.”

Pradhan said the people of Odisha in ancient times went to Sri Lanka, and to many places in Southeast Asia, especially Thailand, and these links have been found through the Buddhist ­interpretations found there. This is a major ­evidence of Odisha’s “soft power” spreading throughout Southeast Asia.

Minister of state for civil aviation Jayant Sinha, who gave the keynote address, said Odisha has key services-driven industries such as tourism and garments that give it a natural competitive advantage. Addressing a packed house, Sinha also listed outward migration as an issue that can be tackled by building the right infrastructure. He said Odisha’s tourism industry “can be a real game changer”.  “Every time I come to Odisha, I am struck by how beautiful this place is,” he said. Interesting ideas for reimagining Odisha came up at a panel discussion featuring top Odia names like Lok Sabha MP Bhartruhari Mahtab, former Odisha finance minister Panchanan Kanungo, former bureaucrat and politician Aparajita Sarangi, former ­bureaucrat Jugal Kishore Mohapatra and ent­repreneur Ramesh Mahapatra.

The participants, who ranged from ministers to intellectuals, industrialists, thought leaders and artistes, shared their vision for Odisha and what can be done to realise the aspirations.

The speakers stressed on sustainable models to tap the immense potential to make Odisha the “Germany of India”, as one speaker said. Odisha has the capacity and the vision, and one cannot afford to be laidback about taking it forward ­anymore, they felt. The commercial potential of Odisha and future projects were talked about at another panel discussion—‘The Role of PSUs in Odisha’s Development’. It featured P.K. Moh­apatra, director, technical (NTPC), Bhuwan Chandra Tripathi (CMD, GAIL), V. Bala­subramanyam (director, production, Nalco), Sanjiv Singh (CMD, Indian Oil) and S.K. Mishra (manager traffic, Paradip Port Trust). During a conversation with TV anchor Shobh­ana, top Odia actors Babushaan Mohanty and Archita Sahu came up with interesting ideas on how to make the state’s cinema more successful, including dipping into popular Odia novels to make different kind of films.

Entrepreneurs from the state discussed the reasons for the lack of entrepreneurial culture in Odisha at a panel discussion on ‘How Can Odisha Benefit?’, featuring Sukirti Patnaik, Mukti Kanta Mishra, Jagi Mangat Panda and Samir Kumar Swain. Why doesn’t Odisha have many entrepreneurs? Is peer group support to entrepreneurship lacking? Is the culture of risk-taking in the state, especially among women, missing? Or is it that people don’t dream about starting new ventures? Those were some of the questions that came up.

In the middle of the serious talk, the Berhampur-based Prince Dance Group ent­hralled the audience with some scintillating moves. With painted bodies, the young men, who also work as daily wage labourers, gave the audience a visual glimpse of what the state and its imaginative people are capable of.