Murasoli, the DMK’s off­icial organ, shocked its readers when it carried an article on March 8 titled ‘Amma­vin Aavi Ungalai Vidaadhu’ (Amma’s spirit will not spare you). 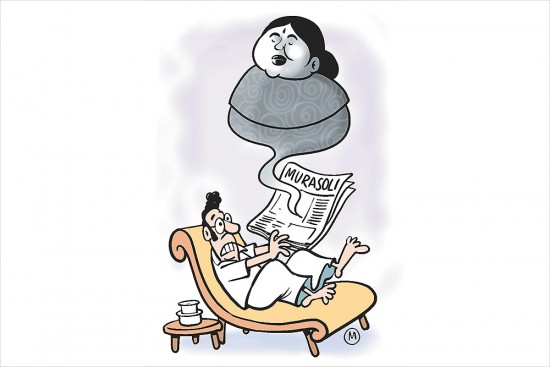 Murasoli, the DMK’s off­icial organ, shocked its readers when it carried an article on March 8 titled ‘Amma­vin Aavi Ungalai Vidaadhu’ (Amma’s spirit will not spare you). EPS and OPS, it says, won’t be spared the wrath of Jaya’s spirit for joining hands with the BJP to escape the many corruption charges and I-T cases against them. The piece adds how OPS—who had meditated at Jaya’s samadhi—had “complained to her spirit” about the injustice meted to him by the Sasikala family and initially rev­olted against EPS, but then hastily made peace just to be deputy CM.

The DMK proclaims to be rationalist, and Stalin has faced flak from right-wing groups for being critical of things Hindu. No wonder, the Murasoli article, premised as it was on spirits and their wrath, stun­ned DMK supp­orters. Insiders say it was aimed at earning the sympathy of genuine Jaya admirers who feel let down by the AIADMK’s alliance with the BJP, which Amma did not accept in 2014. The counter: the DMK is nervous about that burgeoning alliance, with the PMK et al. “Maybe it’s time Stalin got reassured by Karunanidhi’s spirit,” said a wag.