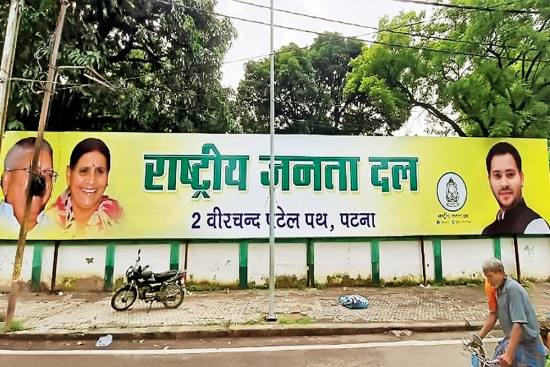 The RJD has staked claim to a 13,799 sq ft plot adjacent to its existing party office in Patna, saying the party needs a bigger plot in keeping with its numerical strength in the state ­assembly. Leader of Opposition Tejashwi Prasad Yadav says the RJD has the ­smallest premises in spite of being the largest party in the legislature. “The JD(U) has 43 MLAs, but its office area is spread over 66,000 sq ft, while the BJP, which has 74 legislators, has its office on a 52,000 sq ft plot,” he says. “On the other hand, the RJD, with 75 MLAs, has only 19,842 sq ft for its office.”

Tejashwi alleges that the JD(U) has grabbed land near its office after the old MLA flats there were demolished. The RJD has written to the CM raising the issue. The offices of all the three major parties are ­incidentally, located close to one another on Vir Chand Patel Marg in central Patna.

RJD state president Jagdanand Singh had earlier written to the building ­construction department seeking ­allotment of 13,799 sq ft on the northern flank of the party office. He contends it is against the principle of justice that the third biggest party in the state—the JD(U)—has the maximum space for its ­office. “All the ­parties should have equal space, but that is not the case in Bihar,” he says. “The ­vacant plot beside the RJD office should be allotted to us.”

ALSO READ: JD(U)’s No. 2 Problem: Battle For the Second In Command

The department turned down the RJD’s demand, saying the plot it is demanding cannot be transferred to a political outfit as it comes under the high court pool. The RJD, however, argues that the ­government can easily transfer the land from one pool to another as per needs. Singh points out that the ­bungalow where he lived for 15 years as a minister during RJD rule has since gone to the high court pool.

Nitish Kumar says his government had ­allotted land to all the recognised political parties as per their choice in 2006. “Did they (RJD) allot land for any party during their tenure?” he asks.

The JD(U) says the RJD is asking for more land for a bigger office on the basis of the number of its MLAs, but the party had not reduced the size of its office when it was reduced to only 22 MLAs in the assembly in 2010. In a letter to RJD president Lalu Prasad Yadav, JD(U) spokesman Neeraj Kumar asked why Tejashwi did not show any concern over the RJD’s office space when he was building construction ­minister for 20 months after the 2015 ­assembly polls.