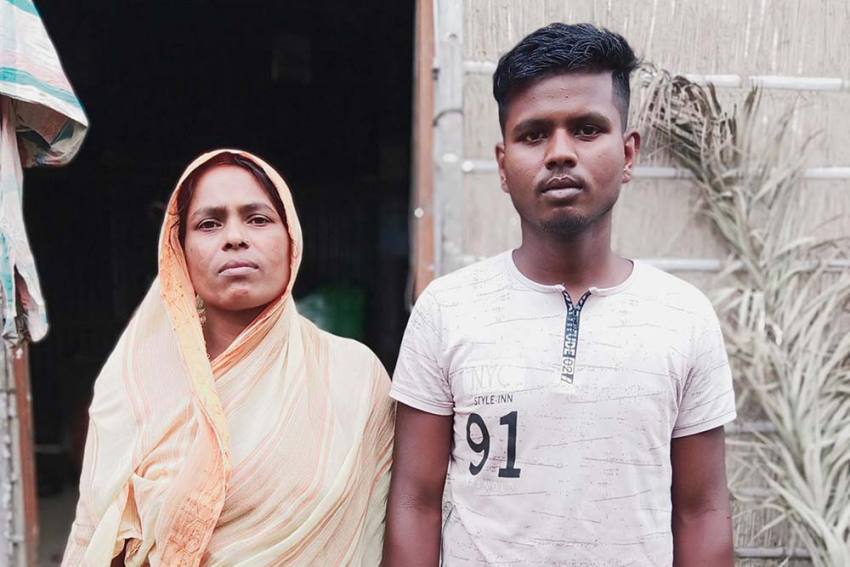 Ashadul Ali with his mother at his village in Assam’s Barpeta district
Abdul Gani May 29, 2020 00:00 IST Despite Odds, Why Barpeta’s Ashadul Ali Must Return To Cities 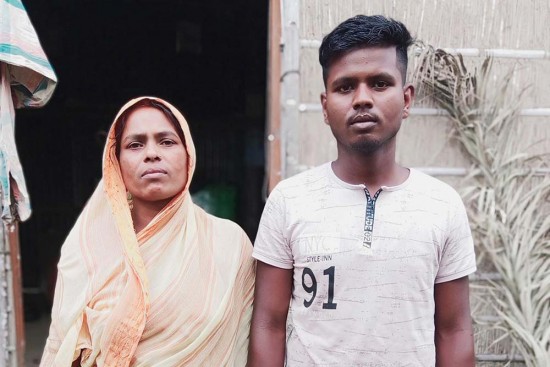 It’s the season of reverse migration—streams of workers on India’s highways, walking from cities towards destinations thousands of miles away under a brazen sun, each passing day bringing diminished hope. Or crowds hitching rides in trucks, clambering on to buses, praying for a seat in a ‘shramik special’ train. Victims of the nationwide lockdown, many migrant workers vowed never to return to heartless metros that made destitutes of them in a trice.

But, as with every endeavour, there are those who run against the tide. Ashadul Ali, 19, from Assam’s Barpeta, worked in Bangalore and is desperate to get back. “I came home as everyone else was rushing back in a panicked state. Now, what will I do to survive?” Ashadul tells Outlook sitting on an embankment near Beki, a major tributary of the Brahmaputra.

Ashadul, who has worked in a tent house in Bangalore for almost a year now, is not the only one from his neighbourhood to earn his livelihood in Bangalore. Fifteen other youths, he says, shifted to Bangalore to take up various jobs. Ashadul earns Rs 10,000 a month there—an enormous, unattainable sum back home.

“I must get back to work as soon as possible. We can get rid of the disease (COVID-19) but here we will starve,” he says. Witnessing devastation by the annual floods and river erosion has hardened Ashadul. “We have seen lot of hardship from a young age. Our house has been washed away twice. We had a narrow escape once, while the next time we were just helpless witnesses to the devastation,” he recalls. This last incident was in 2013; he was too little to rem­ember the earlier calamity.

Caught between natural calamity and lack of employment, youths like Ashadul must leave home.

“Father is getting old and doesn’t earn much by selling milk. It becomes difficult to feed our two cows,” adds Ashadul. Ever since the 2013 floods led to their ruination, Ashadul’s family has been living in their uncle’s land; in return, his father helps out in the relatives’ agricultural fields. “We too had lands around five bighas, but these are now under water,” Ashadul says wistfully.

The alternative to the humiliation of working for relations for a pittance is the job card issued by the panchayat. Yet work is not regular. “When we get to work, we get around Rs 250 a day. But mostly we sit idle. It’s better to move out. When I’m in Bangalore, I can at least send Rs 7,000 home, which means a lot,” says Ashadul, elaborating on the circumstances that forced him out of Assam. Then there are the two younger brothers, the youngest one a nine-year-old. “I couldn’t study much but I want my brother to study. Another reason I have to work extra hard,” he adds.

Not just Ashadul, hundreds like him from this area are waiting to return. Most are from habitations by rivers and sand bars (locally known as ‘chars’); all have run the fearsome gauntlet of annual floods, erosion of land and endless misery. Their agricultural fields broken away, bit by bit, by the cruel waters, they were forced to move out of their villages in search of work.

“This is a reality here. If they are scared by COVID-19, their families will starve. Obviously, they would like to go back. Here scope for livelihood is limited and many face racist slurs even within the state,” says Ashraful Hussain, a local social worker. “‘Bangladeshi’ here is an insulting slur hurled at these poor Muslim migrant workers. All this, apart from more job opportunities elsewhere, have driven them out,” adds Hussain. Ashadul seems to have made an astute, obvious decision. But then, life has hardly given him more than one choice.