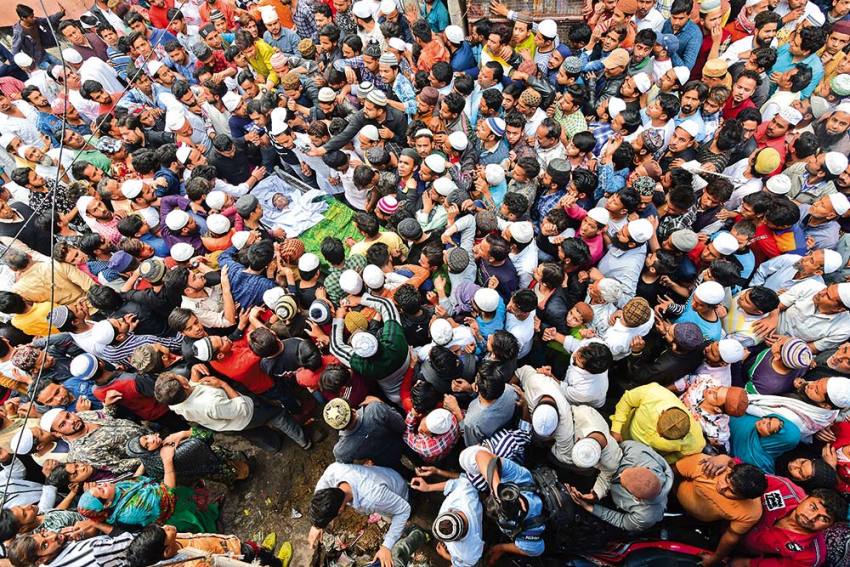 The Last Journey
People gather for the funeral of a Muslim killed in the Delhi riots
Photo by Tribhuvan Tiwari
Jeevan Prakash Sharma March 04, 2020 00:00 IST Delhi Riots 2020: Of Love, Longing And Broken Hearts, The Long Journey To Mind Healing 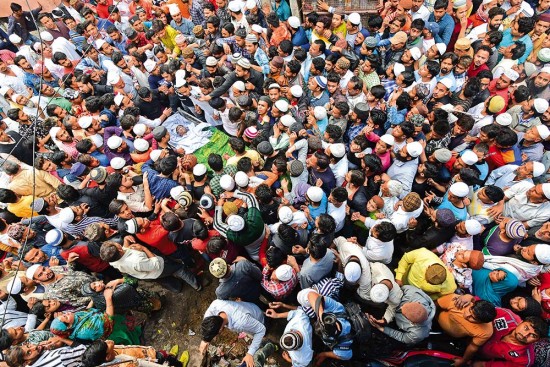 The boy, barely 10, drags a suitcase through the street strewn with brickbats; a few adults walk ahead of him, holding bags and household items that can be carried. One of them, a woman, looks back at the lane, at a soot-blackened house that had been their home for the past 10 years.  She feels a lump in their throat, but the eyes are dry—they had shed tears nonstop over the past couple of days, their house burnt and their small shop looted by rioters.  They are not sure if they will ever return to Shiv Vihar, which was their home after the family of five migrated from Bihar a decade ago.

As the smoke clears and dust settles on the riot-hit localities of Northeast Delhi and the nation counts the dead—47 and rising—stories of families leaving their homes to “safer places” begin to emerge. More than 3,000 people are believed to have migrated to their relatives’ homes or privately-managed reh­abilitation camps in nearby colonies. Many have left for their home states. But no official estimation of loss of private property and commercial est­ablishments due to large-scale arson, sabotage and destruction is available as of now. Similarly, the psychological effects on the riot-hit and erosion of trust among the communities that peacefully co-existed for decades will have much wider and deeper consequences.

A walk down the deserted lanes shows that the rioters had done their homework: target core business to achieve their purpose, which was to loot and create a sense of fear psychosis. And they succeeded. Take the case of Shiv Vihar, a colony with a mixed population of both Hindus and Muslims. One part with over 200 houses, belonging mainly to Muslims, is completely deserted. Though there was no loss of lives here, yet the damage to property is staggering. One of the questions that have emerged is: Why did a divide over CAA turn into communal riots in this part of the city whereas other areas like Shaheen Bagh, despite repeated provocation, remained peaceful?

Many people in various colonies in Delhi’s northeastern district say the answer lies in the social stratification that makes this part of Delhi more vulnerable to hate crime. 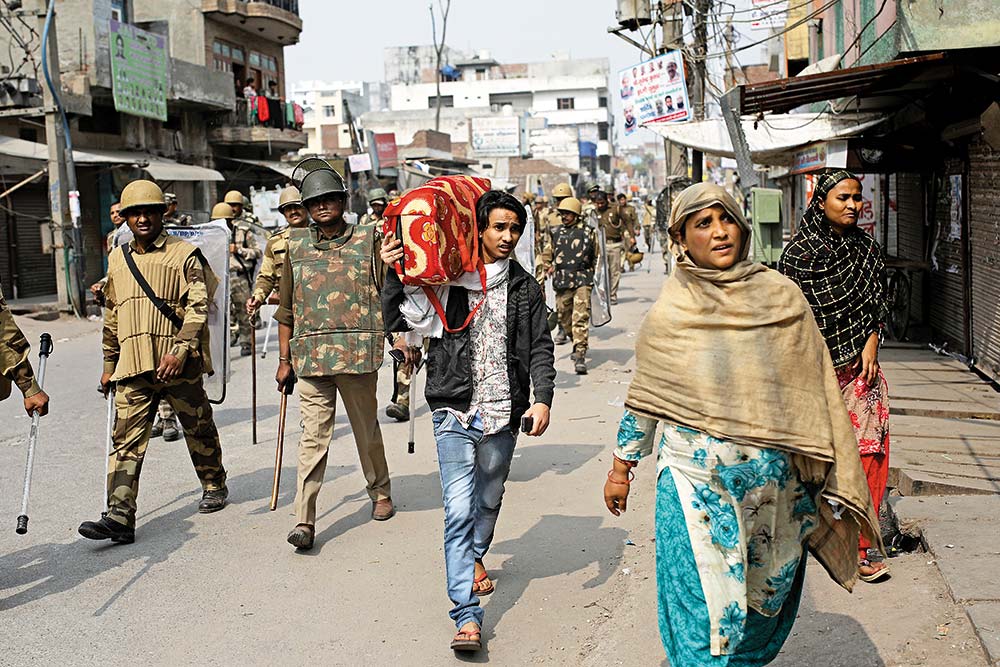 Pockets in assembly constituencies such as Babarpur, Gonda, Karawal Nagar, Gokulpuri, Mustafabad and Rohtas Nagar, which were severely aff­ected in the riots, are among the most under-developed areas of Delhi. Most of the people in these areas are ­migrants—semi-literate—from Bihar and Uttar Pradesh, who landed here in search of livelihood. They are ­engaged in small businesses, including ­repairing electrical equipments, ­grocers, footpath hawkers, manual ­labour and car mechanics. A majority of Muslims are into the leather and ­bakery businesses. These colonies emerged out of the need to fulfil the dwelling needs of emerging population since the late 1990s. “People ­constructed houses on agricultural land illegally. Some ­colonies were ­regularised just a few years ago,” says Dr M.A. Khan, head of the residents’ association of Shiv Vihar phase 7.

In riot-hit areas, the very identity of Muslims has become their biggest enemy.

Most of the communities and colonies that were targeted are home to lower income groups: daily wage earners for whom the loss of even a day’s wage is crippling. These are also people who have lived with a sense of insecurity—about their religious identity and economic status. “I believe that even in normal day-to-day dealings, one has to be careful while talking with people here. You never know what hurts their sensibilities. It is easy to mislead and incite such people,” says Imran, a 25-year-old journalist who only uses his first name. A resident of Chand Bagh since he was born—one of the severely riot-hit areas—Imran says people here had started their businesses with very small savings. “It will take years for them now as they will have to start from scratch.” And such incidents also make the people more suspicious and susceptible to provocation. For migrant labourers, the psychological impact of being subjected to identity-­based violence can be devastating as they become easy targets and have few resources available to them.

Ram Prakash, 60, a sweet shop owner in Shiv Vihar, saw his shop looted and then set on fire by rioters. “Everything has turned into ashes. I was running this shop for over 20 years. I don’t know how I will start everything all over again,” Prakash says. Ram Baran Singh’s grocery shop was next to Prakash’s. It too met the same fate. “They ransacked the shop and took away the valuables. They then burnt it down,” Ram Baran says. Most of the bakery shops in Shiv Vihar have turned into ashes and their owners are yet to come to terms with the sudden loss.

Sana, a single mother who works as a clerk at the Karkardooma court, says she was forced to leave her rented ­accommodation at Bhagirathi Vihar and seek shelter at the Al Hind ­hospital in the neighbouring colony. “I haven’t been able to attend office for the past week. I had a support ­system with my neighbours who baby sat my kids…it has been completely ­destroyed,” she adds.

Chetan Singh, a Supreme Court ­lawyer who extensively travelled to various riot-hit areas, says that ­economically, the consequences have been paralysing for the low-earning Muslim shopkeepers, mechanic shop owners etc whose shops were specifically targeted. “The fact that people were forced to move to other places at such a short notice can lead to the ­destruction of communities that function as intricate economic systems and are greatly ­dep­endent on each other,” Singh says. “For example, prominent wholesellers who have been targeted are unable to provide business opportunities to small scale business. As a cascading effect, this can ruin small scale businesses,” Singh said.

Singh draws a parallel with the 2002 riots in Surat and says the traders in the Gujarat business hub are not big ent­repreneurs, but small-scale operators with a great degree of interdep­endability. Historically a trade city, Surat is yet to completely recover from the impact of Muslim traders leaving for safer living conditions. “Once a link in the supply chain is eliminated, the entire trade chain is irrevocably ­damaged. Recovery, if possible is ­painfully slow. The ties that hold these communities together were built over years of trust and trading with each other. Once damaged, they are even more unl­ikely to ever be restored than economic ties,” he adds.

The stories emerging out of Delhi are worrying not only because of the ­heinous nature of the crimes, but also bec­ause of the indelible mark they would leave on the survivors and the society. Locals argue that Delhi, which today has a mixed population, has ­historically prided itself on its ­plurality. People who migrated from villages, towns and smaller cities have escaped discriminatory attitudes based on faith, caste, creed etc by ­leaving behind their identities. But in the lanes and bylanes of the riot-hit areas, the very identity of Muslims has become their biggest enemy.