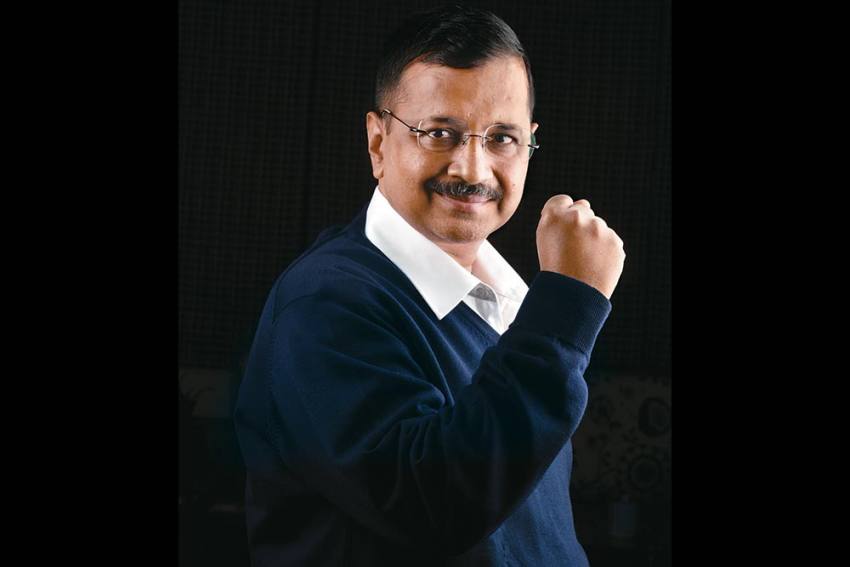 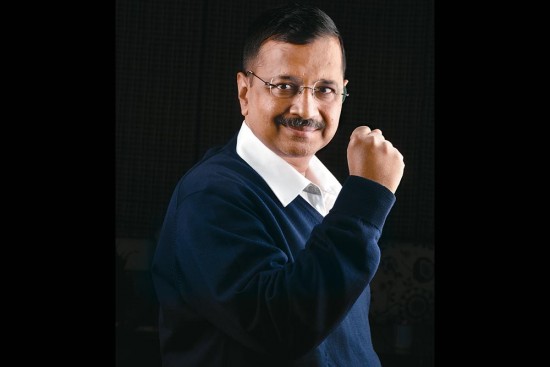 It’s no coincidence that the Aam Aadmi Party launched its new campaign—“Connect with AAP for nation-building”—on the day it won 62 of Delhi’s 70 assembly seats, storming to power for the third time in a row. Faced with a highly polarised discourse, AAP pulled off the feat by focusing on its record in governance—school reforms, mohalla clinics, free bus rides for women, free electricity and water, CCTVs, free WiFi. In the backdrop were the Shaheen Bagh sit-in, police crackdowns on protestors against the Citizenship (Amendment) Act and a vitriolic campaign by the BJP. In his first speech after the result, AAP chief Arvind Kejriwal said the victory marks the beginning of a new model of politics that it wants to ­convert into a national template.

“The new politics is the Kejriwal model of development,” says AAP campaigner Jasmine Shah, who is vice chairperson of the Delhi government’s  dialogue and development commission. “This is a brand of politics where the government relentlessly focuses on people’s basic necessities—water, electricity, education. The Delhi government has already set a benchmark in health and education, with many state governments emulating it. AAP stands for an alternative brand of patriotism and nationalism that is not built around hatred,” adds Shah, who is also a member of the party’s manifesto committee.

While the Congress drew a blank, losing its deposit in 63 of the 66 seats it contested, the BJP bagged eight seats with 38.51 per cent votes, improving its tally from three with 32.2 per cent votes in 2015. “Voters have made a clear distinction between national and state elections,” says ­political scientist Sandeep Shastri. “AAP won even though the BJP had swept the Lok Sabha election only last year, winning all the Delhi seats. This is a clear trend indicating that the popular perception of governance matters. It also shows that people look for a credible face leading the party they vote for.” 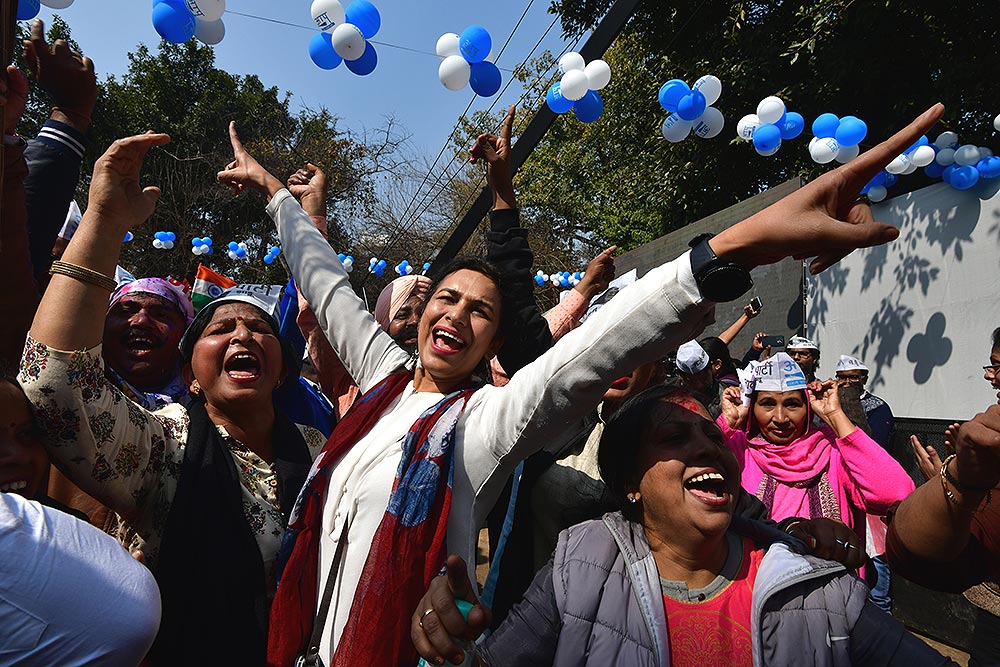 Though the BJP began its campaign by talking of unauthorised colonies and central welfare schemes, it shifted focus to Shaheen Bagh and the anti-CAA protests in the last few weeks. “The BJP tried to puncture our narrative on what our government has done so far, but realised it can’t make a dent on AAP,” says AAP spokesperson Saurabh Bharadwaj, who won the Greater Kailash seat for the third consecutive time. “The more Kejriwal is targeted, the more it helps him. That’s why the BJP changed gears and shifted to polarisation. Their agenda of communalising Delhi politics proved costly in the end.”

Bharadwaj concedes it wasn’t easy to desist from responding to the BJP’s hyper-nationalist campaign. “Parties and politicians believe you need a kind of caste combination, polarisation or emotive issue to win elections. It was a tough decision to seek votes only on the basis of what our government has done so far,” he says.

Admitting that AAP’s victory would be interpreted as the defeat of a ­campaign based on hatred, Gilles Verniers, assistant professor of political science at Ashoka University, warns against “simplistic binaries” as “multiple factors guide electoral behaviour”. “There are other factors besides their election pitch that went against the BJP: weak leadership, factionalism, the baggage of being in the Opposition for 20 years. The result won’t really tell us what people feel or think about the issues raised by the BJP. Many of those who voted BJP in the last general elections and continue to support the Narendra Modi government are reported to have chosen AAP in the state election,” adds Verniers.

“Kejriwal didn’t support protestors as it would have alienated voters,” says Gilles Verniers.

Observers say that AAP’s strategic move of not directly attacking PM Modi in its campaign and supporting his government on contentious issues such as abrogation of Article 370 shows that its ideological positions are somewhat flexible. “AAP decided to not respond to the BJP’s provocations, which would have amounted to taking the bait,” says Verniers. “Had the Delhi CM decided to support the protestors at Shaheen Bagh or the students of JNU, it would have alienated many AAP voters who don’t care about the protests, besides preventing AAP from campaigning on its own terms instead of those set by the BJP. This was a good political move.”

Kejriwal’s ‘right-of-centre’ approach also dictated his invocation of the Hanuman Chalisa and his party’s alignment with the BJP on Article 370. Kejriwal has been criticised for playing along with the BJP on wearing one’s religious identity on the sleeves, and for cautiously sidestepping questions on Shaheen Bagh. His ambiguous stand on CAA and the National Register of Citizens has baffled his detractors too.

“He consciously adopted a right-of-centre position so that the BJP could not claim a monopoly over Hindustan,” says Shastri. “It’s strategically interesting. The BJP appeared to monopolise the Ram Mandir issue. AAP decided to focus on Hanuman rather than Ram. Hanuman is more acceptable to the minority community, and represents devotion, faith, courage and also the underdogs. In a sense, Kejriwal plugged the holes of the BJP.”

A senior AAP leader, however, doesn’t agree that Kejriwal is toeing a Hindutva line. “The criticism that Kejriwal is peddling soft Hindutva arises because people don’t understand Hindutva, which is using Hinduism for political gain. Kejriwal is a believing Hindu. He was asked to recite the Hanuman Chalisa and he did it,” he says. “Has Kejriwal ever asked people to vote for him in the name of Hanuman and Ram? He hasn’t. His faith and belief system are very personal to him. He visits a Hanuman temple before he files his nomination. It was only this time that it got highlighted because the BJP took it up and said they alone have the right to name our gods.”

Kejriwal’s three assembly election wins have fuelled talk of consolidation of regional leaders at the national level. Coming after the assembly elections in Jharkhand and Maharashtra, where the BJP had to eat humble pie, AAP’s Delhi victory has rejuvenated the idea of a federal front again. However, observers feel that Kejriwal will remain a Delhi phenomenon despite his popularity as he has already burnt his finger with AAP’s Punjab and Goa experiments.

“AAP is caught in the following conundrum: it improves its prospects at home when it does not seek to expand its imprint beyond the borders of the capital.” says Verniers. “Since the MCD elections of 2017, AAP has changed gears on its systematic opposition to the BJP. It stopped projecting ambitions to build an organisation outside Delhi, focusing instead on local issues and day-to-day governance. They may be tempted to try expansion again, but it hasn’t worked so far, barring a few pockets in Punjab. AAP’s base and platform is currently insufficient to build up a national or even trans-state organisation. It cannot carve space for itself only by going after the BJP. It is more likely to do so by denting into vote bases of the regional parties or the Congress.”

Shastri says Kejriwal is doing “mainstream politics” even though AAP started out with “alternative politics”. “Where’s the anti-corruption crus­ade? Look at the way they have given tickets in the assembly elections. Look at the number of crorepatis in their list. Nobody is going to buy their argument of alternative politics anymore. They are an alternative within mainstream politics,” he adds. As an AAP leader puts it, “Kejriwal is the politician India needs. He represents the modern face of politics.”

How About A Crisp Dosa With Fermented Soy Beans And Fish Mash?