Despite the pandemic, the controversial central vista redevelopment project, estimated at a stupendous Rs 20,000 crores, is in full motion 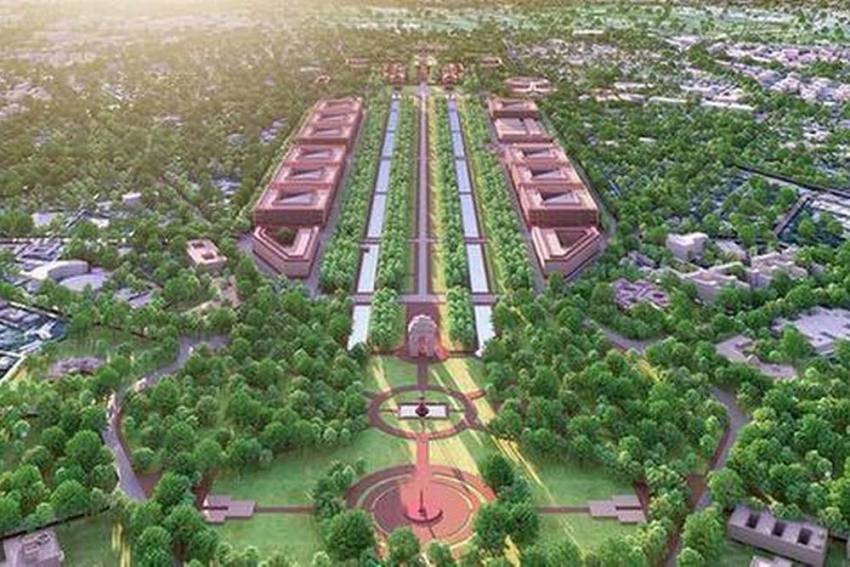 A model shows how a refurbished Central Vista will look like changes
Preetha Nair May 08, 2020 00:00 IST COVIDED! OMG, Modi Government Wants A Triangular Parliament House And Office Buildings Along Rajpath 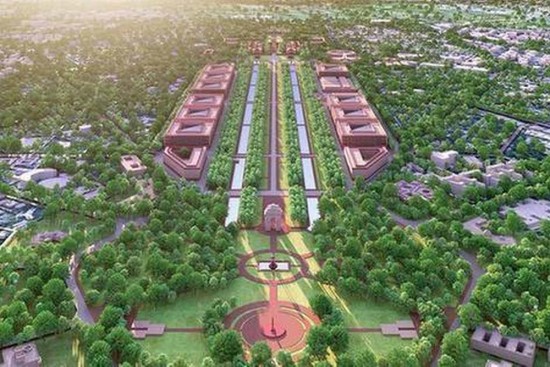 Eclecticism was a guiding principle of British architecture in India, and over a century and a half, the Neo-Classical, Gothic, Palladian and Neo-Gothic styles were married, happily and unhappily, with Indian-style cupolas, verandahs, domes and kiosks. ‘Indo-Saracenic’ merely subsumed such sub-types as the ‘Hindu-Gothic’ and the ‘Renaissance-Mughal’. When tasked to lay out a new seat of government that would adequately reflect imperial grandeur, architects Edwin Lutyens and Herbert Baker had a certain history to conform to. The new edifices of New Delhi, especially in the Central Vista and around, lacked the brash confidence of buildings built in the high noon of imperialism, but followed them in their blend of East and West: the circular Parliament building was inspired by Roman styles, while the dominating central dome of Rashtrapati Bhavan evolved from a Buddhist stupa; grand Mughal Gardens rested cheek-by-jowl with English rose gardens and Connaught Place was clearly modeled on Bath, with elements of a London high street. No one would dispute that the huge complex, built—from 1911 to 1932—when the imperial purpose itself was fading, was grand.

The iconic stature of the whole complex, however, was accreted over seventy years of the Indian republic, as it hosted successive governments and generations of bureaucracy. It is now considered by citizens to be as Indian as anything, synonymous with the history of our republic, a repository of national pride and majesty.

Now, nearly nine decades after New Delhi was officially inaugurated, this grandiloquence in stone and marble is set for a makeover amidst a raging pandemic and controversy. The central vista redevelopment project— estimated at a whopping Rs 20,000 crores—covers a three-km stretch from Rashtrapati Bhavan, North Block and South Block, up to India Gate. The mega project—including construction of a new, triangular parliament building opposite the current one, and office buildings for all ministries along the Rajpath in lieu of the North and South Block—has created a furore since the Modi government set the ball rolling in September last year.

Despite concerns over the Central Vista project’s environmental impact, it got a green nod.

With the Central Vista Committee—a special advisory group for the project— giving clearance to the new Parliament building on April 23, it seems that the government has no time to lose, even in the face of a severe financial meltdown caused by the outbreak. Though urban planners and activists have raised concerns over the environmental impact of the project, the Union environment ministry’s obliging green nod has helped the government in clearing another hurdle.

Kanchi Kohli, senior researcher at Centre for Policy Research, says that the government needs to take another look at the project in the face of the current economic and humanitarian crisis. “We don’t need a lockdown period to discuss matters of grave public concern through video conferencing when actually the public has no say in it. The concerned ministries could have kept the matter for later or have a considered view of it,” says Kohli.

The timing of the colossal project—which includes a new Parliament, central secretariat and new dwellings for the prime minister and the vice president, has fueled concerns among the Opposition, historians, architects and civil right activists. The project’s opacity, environmental and historical implications have also come under severe criticism.

Though details are still sketchy, the Centre claims that the central vista lacks amenities and services and most of the buildings have outlived their structural lives. “When Parliament was built, there was no concept of air conditioners and other facilities. So these buildings need to be upgraded and need conservation,” says a senior official with the Union Ministry of Housing and Urban affairs.

A ministry official says all fears are unfounded: heritage buildings will not be tampered with.

Historians and conservationists stress on the old principle—that in the battle between heritage and modernity, the heritage nature of the structures should be kept intact. Historian and convenor of INTACH, Swapna Liddle, says that rather than converting the heritage buildings into museums—as is the current plan—they should be restored. “According to Delhi building bylaws and the master plan, the central vista is a notified heritage area. So, an assessment should be conducted before making any changes,” says Liddle.

The government’s haste over the project was questioned by many when the urban affairs ministry issued a notification on March 20 in this regard. It sought to amend the land use of five plots for the revamping project, as recommended by the Delhi Development Authority (DDA).

Opposition Congress launched a scathing attack on the extravagance and the distorted priority of the government in these trying times. Its spokesperson Sanjay Jha says that the entire exercise is adapted to suit the BJP’s game plan of creating a new symbolism of Indianness and to destroy open public places. “The economy has gone belly-up and India’s GDP is likely to be in negative territory this fiscal year. Why aren’t new buildings built in a less inhabited area and prime real estate released in Lutyens Delhi? This project should be scrapped forthwith,” he says.

Historians also say that the arguments to do away with colonial heritage are uncalled for. “The buildings shouldn’t be discredited as colonial heritage. It’s built with the Indian tax payers’ money and our people’s effort. It’s an important part of our heritage,” says Liddle. The thousands of stone-cutters, masons and labourers who toiled for two decades might agree.