Exalted achievements of yore are often cited by to rehash the story of past political icons.

They exist singly, or in groups, these Marxist eminences—painted on walls, projected on hoa­­rdings, stamped on covers of pam­­phlets. Images of Karl Marx, Lenin, Josef Stalin and Che Guevara—revolutionary midwives of a promised Arca­dian perfection—are a ubiquitous sight across Kerala. Most posters are still fresh from the recently held assembly elections where the ruling Communist Party of India (Marxist) secured a second term. However, dialectic mate­­rialism was put to a stern test when Marxist icons, gods no less in much of the 20th century Communist world, found themselves competing for space with Lord Ayyappa, the presiding deity at Sabarimala temple. Though the Communists defeated the BJP and Congress in the polls—both promised “retaining the glory of Sabarimala temple by barring menstruating women”—the fault-lines in Malayali society and politics have deepened.

Kerala’s ‘progressive’ society witnessed violence and an outpouring of competing emotions in 2018 after the Supreme Court allowed entry of women of all ages into the temple where, by tradition, menstruating women are barred entry. Inevitably, ‘status quo for Sabarimala’ became the main plank of the saffron party and Congress in the 2019 parliamentary elections, in which the ruling CPI(M) faced a severe electoral setback. “It is a classic case of political parties playing politics of nostalgia over ancient customs and beliefs,’’ points out a sociologist.

Indeed, nostalgia, defined as a sentimental longing for the past, has become a tool for political parties the world over—a wilful erasure of the grey comp­lexities of past and present in favour of a call to return to a gilded period. The project has not only gathered traction in China and India; in the West, the seductions of a reworked nationalism—so long confined to the fringes—have broken through the armature of benevolent liberalism. “In the past few years, we’ve seen a resurgence of nationalistic political movements that have gained traction by way of promoting a return to the ‘good old days’: ‘Make America Great Again’ in the US, or ‘We Want Our Country Back’ in the UK. These politics of nostalgia promote the implementation of policies that, supposedly, would return nations to times in which people were better off,” writes Felipe de Brigard of Duke University in a recent article.

Social scientist Shiv Visvanathan has been a keen observer of populist nationalism colouring Indian politics, shade by darkening shade. “Similar to events in the US or UK, in India, too, political parties use nostalgia in the event of weakening of ideology or organisational vision. What makes nostalgia sad is its usage of the past like a tool box. Like a hammer or a screwdriver. Not like music or poetry. Whether it’s Modi or Trump, I’m worried about the mediocrity of performan­ces about nostalgia,” says Visvanathan.

Currently, it is the nationalist right-wing parties that are reaping EVM-fuls of political dividend by evoking an illusory past exhilaratingly free of the pressing problems of the present. The ruling BJP quite openly draws on the ‘glorious’ past—and a gallery of worthies—to ent­ice voters. However, Left parties and the Congress are no less trapped in an idealised past, for the prestige and validation issuing forth from such faultlessness is essential political capital.

Sociologist Dipankar Gupta calls it rev­erse narcissism. “There is a perennial trait in most of us which is akin to something like ‘reverse narcissism’. Those who suffer from this affliction believe that everything was wonderful in the past and that we are now living through the worst moments of history,” he says.

The analysis certainly fits the Con­gr­ess. The party’s critics point out that the party’s narrative is still doggedly cent­red around Nehru and Indira Gandhi’s legacy, stuck in a bog of failure and lack of any visionary strategy, rooting about hopelessly in the morass. Sociologists also point out that other than indulging in Nehruvian nostalgia, socialist econo­mics and non-alignment policies, the leadership has lost its imagination. 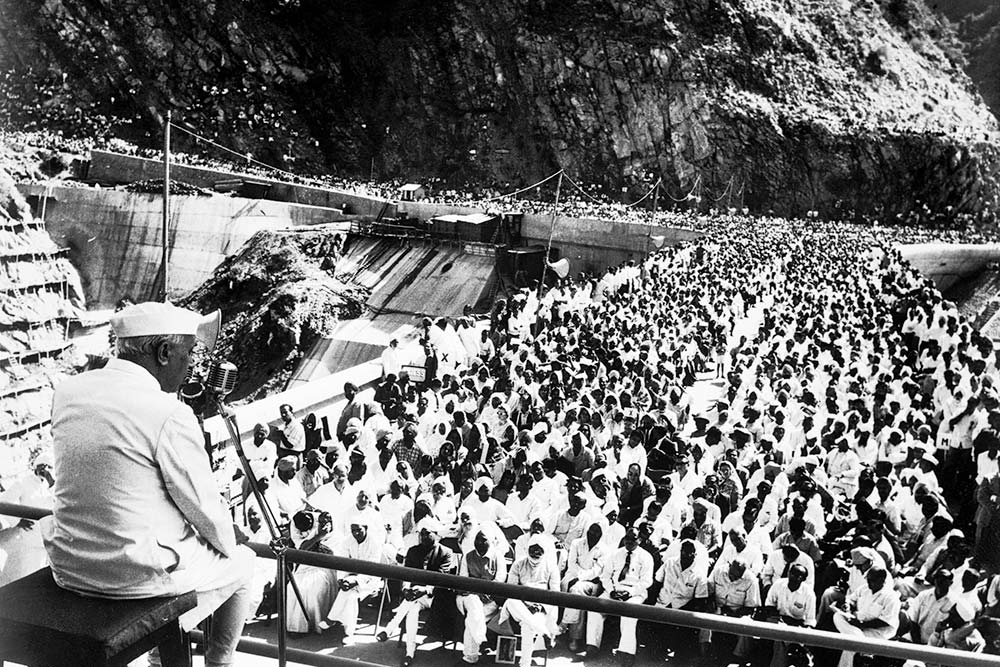 Jawaharlal Nehru speaks at the inauguration of Bhakra dam. The Congress constantly harks back to his legacy.

M.V. Rajeev Gowda, former Rajya Sabha MP and chairman of the Cong­r­ess’s research department, doesn’t agree that the party falls back on an irretrievable past. The Congress, he claims, is mov­­ing ahead in accordance with social needs. “We should be nostalgic about great Congress leaders and their contributions to the country. They fought for freedom, established democracy, and unleashed national pride. Mahatma Gandhi is an inspiration to the world. Nehru was an inspiration to numerous countries breaking out of colonial rule. The right wing’s ideas are revisionist and their nostalgia is cooked up,” he says. Gowda adds beguilingly that the past is a prologue for the future and works as an inspiration for future Congress programmes. From the Green Revolution, White Revolution, five-year plans and economic reforms, Congress governments have set the agenda for development, he says. The five-year plans launched by Nehru in 1951, he says, helped the country make great strides in science and technology, apart from red­ucing poverty and creating jobs. “Nostalgia is not fake history for us. It is valuable information and it gives us strength to go ahead…. We have a long track record of translating ideas into reality,” says Gowda.

Social commentator Santosh Desai feels that politics of nostalgia plays out at two levels. “One is something that exists in some form or the other among people as a shared kind of mythic memory. The other is an attempt to replace one kind of a more tangible memory with another,” he says. Desai also argues that nostalgia is propagandist in nature and it will have adverse ramifications for society. “Instead of being forward looking, you’re looking back to something that did not really exist. The power of nostalgia is the fact that one can attribute any present action as part of a larger plan to reclaim lost glory,” he says.

For the Left parties, nostalgia for its doctrinal politics—forged in imitation of Soviet and Chinese models in a country racked by elemental poverty, hunger, une­mployment and lack of opportunity—pushes it into political wilderness, argues commentators. More than a century after the formation of the Communist Party of India, the Left faces criticism for wallowing in past glory and outdated ideals that is woefully out of touch with a newly aspirational India. The CPI and CPI(M), wielder of significant influence in Indian politics and culture over six decades, is on a steep decline everywhere, except in Kerala. 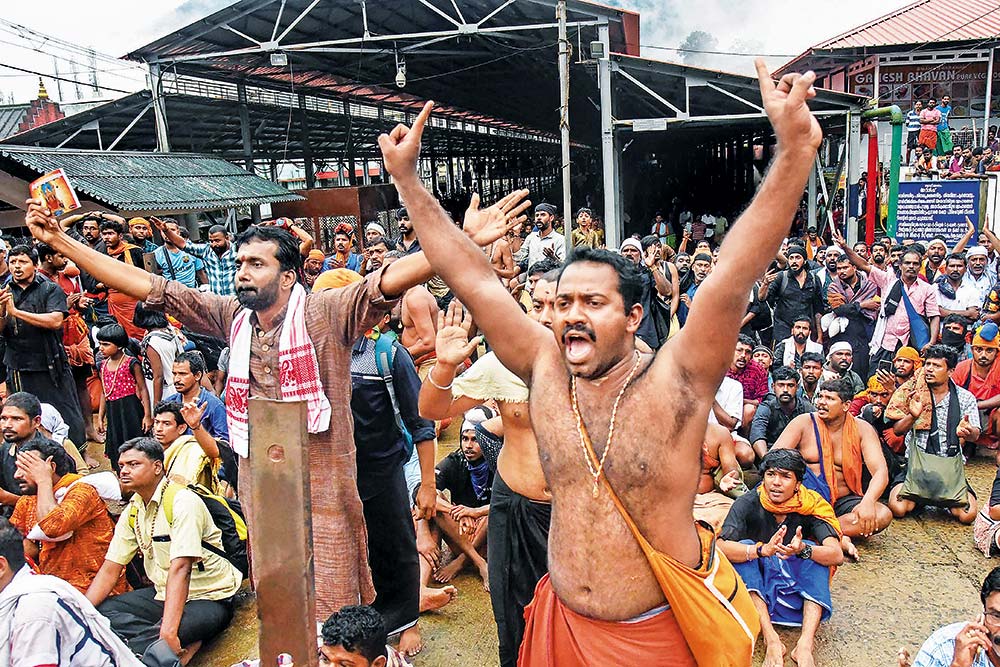 Protestors oppose the entry of women to the Sabarimala temple. The issue split Kerala’s politics and society down the middle.

“The Left parties have lost the power of imagination and it has nothing to invoke. They are not getting nostalgic about the real dreams of justice,” says Visvanathan.

The Left needs to invent a new template, as its political discourse is still weighed down by the experiences of the Soviet Union and other Communist reg­imes, say critics. “Which party in today’s world will have meetings in rooms with photos of long-dead people whose ideas have no relevance anymore? The party is wedded to individuals and their ideas that were shaped in other countries without articulating its version here. While the BJP uses nostalgia to create an electoral constituency, the Left is locked in nostalgia,” says Desai.

Vigorously refuting such a reading, CPI(M) Politburo leader M.A. Baby says that the Kerala model of governance illu­strates the relevance of the Left parties in the current political landscape. “The Left always dwells on the future. The Left parties never try to glorify the past. We try to look and move forward. Kerala is an example of how the Left has taken its political imagination forward. The EMS government in 1957 created history by introducing the Land Reforms Amendment Act. It’s the most ambitious reform in modern India,” he says.

Kerala Speaker and CPI(M) leader M.B. Rajesh seconds the opinion. He says that the Left parties approach the past with rational objectivity and are open for introspection and course correction. “Left looks at the past in a critical, scientific way. There may be events worthy of glorification and less­ons to learn. That’s the Marxist appro­ach. The 20th century has seen socialist experiments in the Soviet Union and Eastern Europe. The Left parties are not trying to repeat the past. We draw inspiration from the past, understand the weaknesses and improvise on it,” he says.

The past is peopled by other persons and other conditions; it is a foreign cou­ntry. Our politicians, yearning for scraps of myths with which to test our credulity, visit it often.

(This appeared in the print edition as "Revolutions: A Running Show")

US Knew About Afghan Air Force Collapse Before Pullout: Report