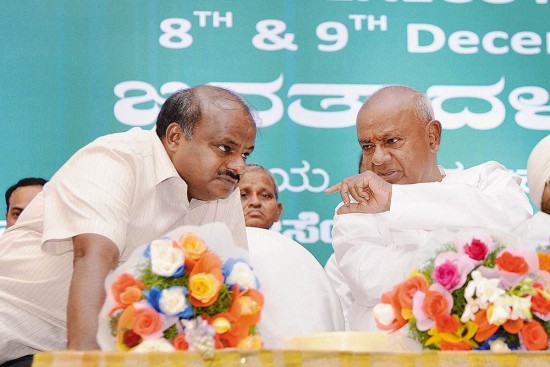 Some snapshots: deep in the Cauvery basin, Nikhil Kumaras­w­amy’s campaign reminds people of the party’s, particularly his father CM H.D. Kumaraswamy’s, regard for farmers. With him is G.T. Deve Gowda, the JD(S) leader from Mysore who ­defeated former CM Siddaramaiah ­on his home turf last year.

Cut northwards into Hassan and “it’s like a marriage,” as district Congress committee president J.M. Manjunath puts it. Of course, it’s the first time such a nuptial is happening. “That’s politics,” he says. It’s here that HD’s other grandson, Prajwal Revanna, is standing for election.

Further north, along the winding roads of Chikmagalur, first a Congressman takes the mike and then a JD(S) leader. Pramod Madhwaraj, the coalition’s candidate here, says things have started to gel. “We’ve had so many workers' meetings but not a single whisper.”

It’s not all hunky dory, of course. It’s easier to get a Congress voter to vote for JD(S) than otherwise, confides a party worker. "So, for a joint candidate on a JD(S) ticket, things might fall into place," he adds. But again, conditions apply. In Mandya, JD(S) is concerned that some Congres­smen are out to play spoiler.