Cheating The Reaper: Perils, And Process, Of Ejecting From Failing Aircraft

The perils, and process, of ejecting from a failing aircraft, as the g-force tears at a pilot’s body and the minus temperature plunges its icy talons into him 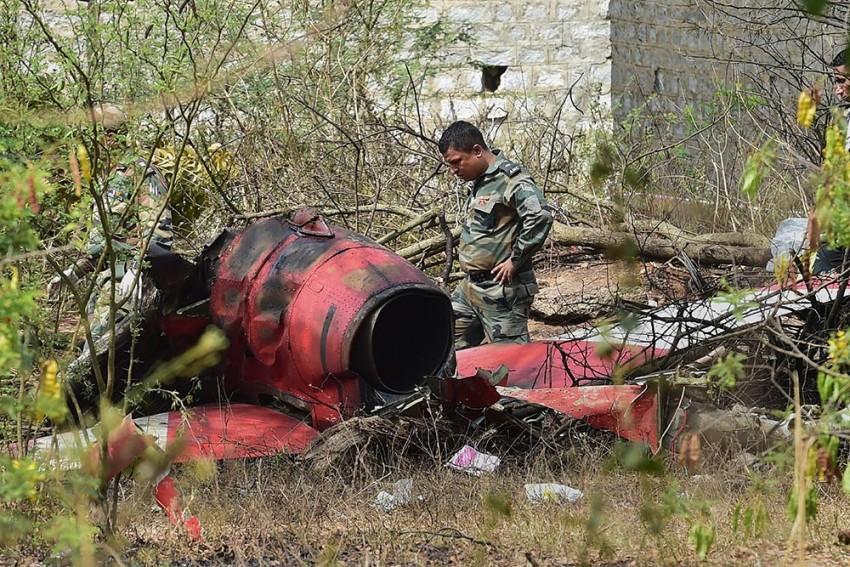 At the crash site of an aircraft of the IAF’s Surya Kiran team
Photograph by PTI
Ajay Sukumaran February 28, 2019 00:00 IST Cheating The Reaper: Perils, And Process, Of Ejecting From Failing Aircraft 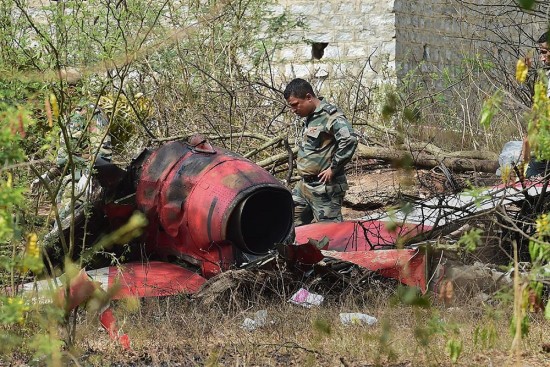 At a time of aerial skirmishes across the Loc, as claims and den­ials rend the air, it’s relevant to look at a hazardous eventuality that the professio­nal combat pilot may face. An aviator like Aman Nautiyal, for instance. When seven failures hit Nautiyal in a single sortie, within a matter of two minutes and forty seconds, his brain did not get cluttered. “It actually started working more efficiently,” says the former Indian Air Force fighter pilot, “ensuring that I took the requi­red act­ions correctly.” At that speed, those couple of minutes were long—Nautiyal says he absorbed so much of what was going on inside the cockpit that he could describe it for hours later.

But fire is a different proposition altogether. A quick glance at the rear-view and he saw that the entire aircraft was on fire, just a metre behind the cockpit. “Eject! Eject! Eject! came as naturally to me as a fish takes to water, with an inherent desire to curl up in the pre-birth womb posture,” Nautiyal tells Outlook, recalling an experience that took place more than a decade ago on a routine training sortie, but whose vivid, elemental details are imprinted deep within his mind. It’s what every fighter pilot is prepared for each time he climbs into his aircraft but it is, fortunately, something most of them don’t encounter in their entire flying career. “The back must stay ram-rod straight during ejection so that the vertebrae don’t say hello to each other. Survival instinct, coupled with training, ensured that I took the correct posture.” The aircraft was by now in a spin. With a smooth pull on the ejection handle bet­ween his legs the cartridge under the seat fired, propelling Nautiyal at high speed into the twilight of a breaking dawn 15,000 feet above ground.

The explosive-charged pilot ejection seat is nearly 80 years old. Yet, the intricate details of an escape from an aircraft spinning out of control are strikingly different. Cut to 2019, and some recent events—all unrelated. Last week, one image that stood out was that of a college student in Bangalore holding the hand of a Surya Kiran acrobatic team pilot lying on the ground, minutes after a mid-air collision, till medical help arrived. The pilot’s parachute had landed in a residential locality and a few residents were the first to reach him even as the crashed aircraft set off fires on the ground. In early February, a Mirage 2000 aircraft crashed during a test flight in Bangalore. Though both pilots had ejected, they died of injuries. A few weeks prior to that, a Jaguar pilot had ejected safely in Uttar Pradesh. 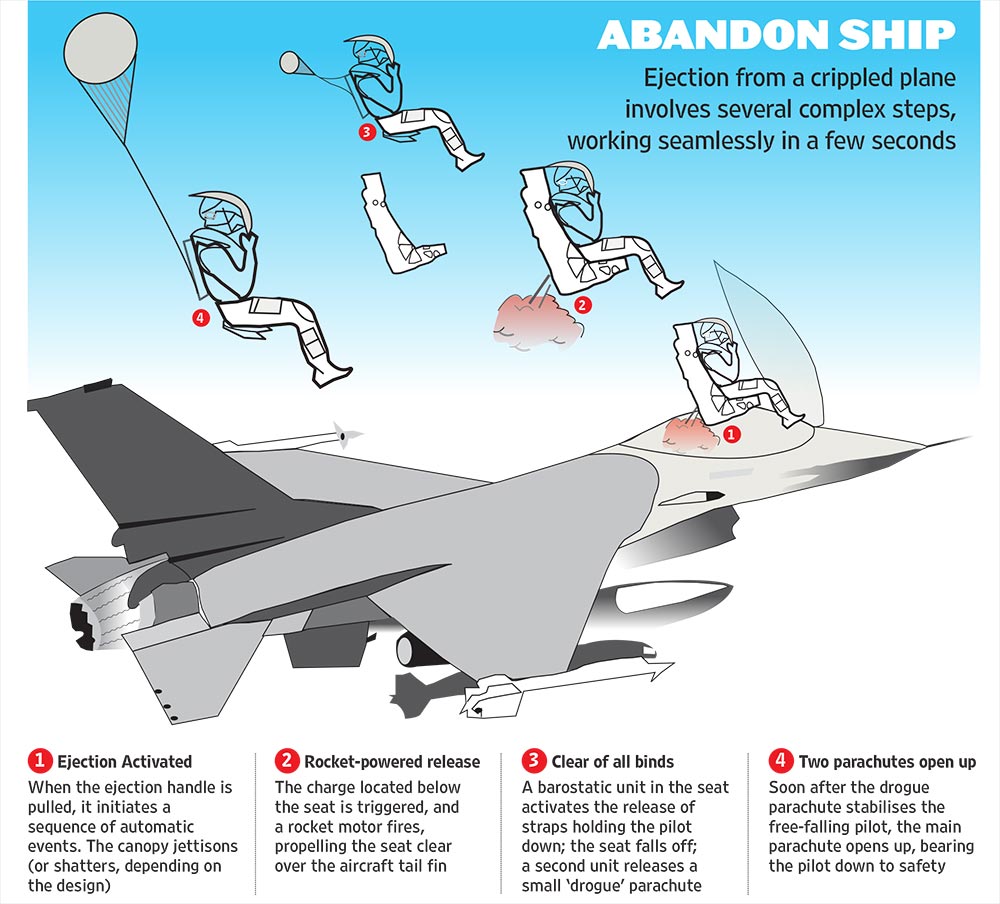 As professionals who plough the heavens at uncommonly high speeds will tell you, pulling the ejection handle is the last resort and no two ejections are alike. But what exactly happens when that handle is pulled? A series of automated sequences kick in, all taking place in milliseconds (see box).

“There could be a lot of situations where you have to get out of the crippled aircraft because you have no other option. That is how it is,” says Air Chief Marshal (retd) Arup Raha, whose encounter with high g-force came early in his career, even bef­ore he was commissioned as an officer into the IAF. A cadet in training at the Air Force Academy in the early 1970s, Raha’s first sortie on an HJT-16 trainer aircraft turned out to be unforgettable—his instr­uctor N.M. Gupte and he had to eject when the engine failed. When the canopy flew off, a wind-blast and the jolt from the seat flying off hurled the young pilot into a tunnel of nothingness—a blackout.

An ejection takes a punishing toll. Damage to the spine, mostly compression vertebral fractures, is a common form of injury.

Pilots deal with gravitational force all the time when up in the air. Even under normal 3-4g, it could be difficult for people to move their hands and head, an IAF officer says. But the force acting on the body when the seat fires off ranges bet­ween 17-25g. “That is, your body weight increases 17-25 times,” explains Raha. So, blood and body fluids are rushing down to the feet, and vision tunnels and greys out momentarily. An ejection handle, therefore, is located between the legs (some models do have a second handle at the top of the seat too) so there’s minimal movement. Besides, ejection, unlike flying, cannot be simulated.

Retired Air Marshal V.K. ‘Jimmy’ Bhatia recalls that when he was a cadet training at Hakimpet in the 1960s, there used to be a catapult-like device to closely replicate the process. “The Vampire trainer had an ejection seat, so batches before us went through some sort of practice,” he says. Much like the actual process, a cartridge charge launched a seat—fitted on vertical rails—up several metres; then the trainee was lowered down. The ‘simulator’ device was apparently discontinued later. In his 40-year career as a fighter pilot, Bhatia says he was fortunate enough to pick the aircraft back each time he had a close call. Pilots go through various drills, cockpit checks and blindfold checks everyday. “With eyes closed, one should be able to know where all the lev­ers, the instruments and their control switches are,” says Bhatia. The same daily drill goes for an ejection—feet together, hands-in, straight-back, pull! That is, practising for an eventuality that might never arise in one’s flying career, over thousands of hours of flying time—that’s how cru­cial getting yourself out of a malfunctioning aircraft is. 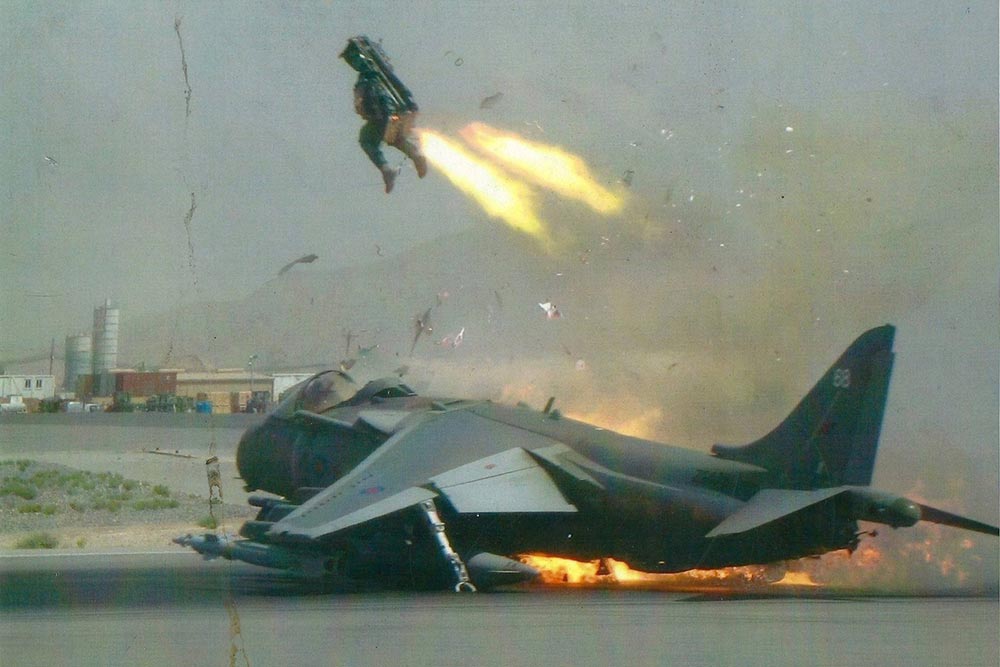 A pilot ejects from a crashing Harrier GR9A in Kandahar, Afghanistan.

“To put it simply, the tail of the aircraft was travelling towards me at 250 metres per second and prudence demanded that I clear its height comfortably before it reached me,” says Nautiyal, who retired a couple of years ago as air commodore. After clearing the aircraft tail, the seat stabilises with the help of drogue parachutes. “So that I found myself sitting erect on a chair, mid-air at an altitude of 4 kilometres, the minus 16 degrees chill car­essing the beads of stress-induced sweat on my brow. A few milliseconds later, the cutters emanated a ghastly metallic chopping sound and the seat separated outwards from my back and bottom,” he says. As he tumbled downwards, a drogue parachute (a small chute that stabilises the pilot)opened, bringing him right side up in a few milliseconds with an immense jolt, so “that all my joints released nitrogen almost simultaneously, sounding like a drummer’s crescendo”. Next, the main chute deployed. The next six-and-a-half min­ute des­cent was smooth till he splashed into the sea. Nautiyal was winched up by an IAF helicopter. In four months, he was back to flying.

A procedure so sudden, in environs so hostile, has to have a punishing toll on the body. Damage to the spine, mostly compression vertebral fractures, is the common form of injury in ejections, much of it relating to the posture while pulling the handle. “The worry of the doctors normally is that sometimes this compression of the vertebrae shows up slightly later. So they make sure that you lie down straight and relax and not do anything that might stress and strain your backbone further,” says Arup Raha. The toll on the human physique—and these are extremely fit men—is underlined by the fact that if a pilot has ejected twice, doctors normally don’t permit him to fly anymore in an ejection-seat aircraft. “That’s because you have a lot of forces acting on your body which could result in injuries later on in your life,” he says.

“When you eject, your body is already prepared for this event and you can ret­rieve the situation,” says Raha—in his case, he had regained his senses as the seat reached its apogee and started tumbling down. But his instructor Gupte’s situation was more precarious because he had to straighten out the aircraft after the co-pilot ejected. “He had very little time to maybe take the correct posture and I think it was a very fortunate that his chute deployed in time...just maybe about 50-100 feet above the ground, to my mind. So he had some injuries,” the former air chief says. Raha vividly recalls his first meeting with Gupte several weeks later—after the latter recovered from his injuries—as the cadets congregated for the flying routine.

The instructor took him around to meet the maintenance staff—the armament specialists who serviced the ejection seats and checked their cartridges and the parachute-prepare section which packed the life-saving equipment. “It didn’t strike me until then to thank them. I learnt a very important lesson that day. It’s not the individual, the team matters more.”

Home Is Where The Hearth Is...