Chanakya Gets His Maurya: Pawar Beats BJP At Its Own Game To Enthrone Thackeray

It won't be a surprise if Thackeray turns to Pawar to seek his advice for smooth running of the coalition government. 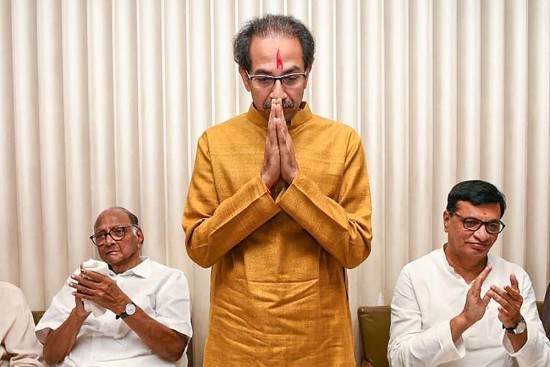 Matoshree, a landmark address primarily known over the years as a parallel power centre in Mumbai, is in for an image makeover. After playing the eminence grise to perfection from behind or not-so-behind the scenes for years, the Thackerays have finally chosen to drop their remote and take power directly into their hands. With Uddhav Thackeray set to assume charge as the chief minister of India’s richest state on November 28, Maharashtra is witnessing the metamorphosis of a kingmaker who did not want to be the king in the first place. Uddhav, the 59-year-old son of the late Sena founder Balasaheb Thackeray, had self-admittedly never imagined that he would ever become the chief minister. But here he is, heading a multi-party coalition government led by Shiv Sena, which turned the tables on the BJP, its pre-poll ally, after a bitterly fought political battle that lasted 33 days.

But will it be an uneasy crown to wear for a seemingly reluctant chief minister, if not accidental, as the leader of a ragtag coalition which comprises allies with diametrically different ideologies? It will fall under its own contradictions, says outgoing chief minister Devendra Fadnavis, whose failure to cobble up the requisite numbers propelled Uddhav to the saddle. “A government on two wheels runs well and even an auto-rickshaw with three wheels runs well, but if the wheels of a three-wheeler start moving in different directions, it will not run for long,” Fadnavis said before tendering his resignation on November 26.