Home  »  Magazine  »  National  » Ecology/Disaster »  In Quest For ‘Black Gold’, Why Dehing Patkai, Amazon Of The East, Is Gasping For Life

Coal India Limited has been mining in the Dehing Patkai Wildlife Sanctuary since 2003. As it seeks further clearances, opposition intensifies 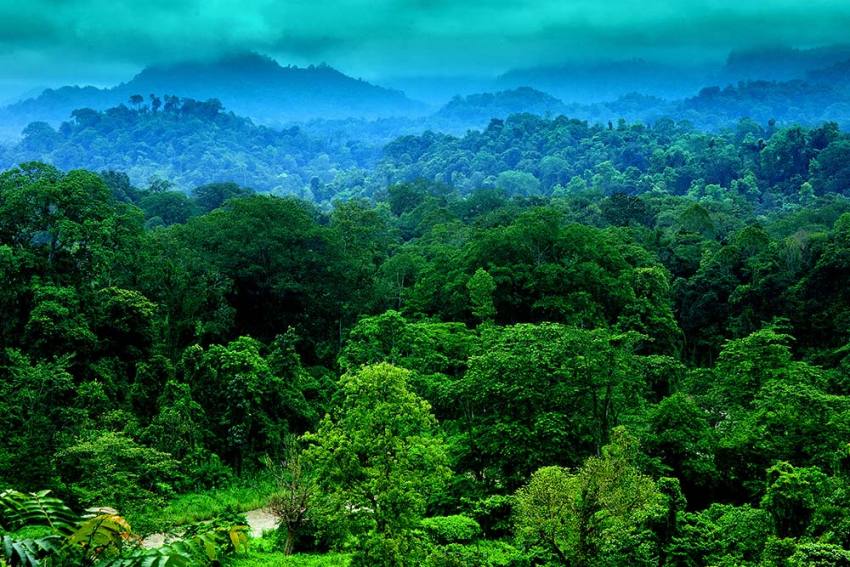 The Dehing Patkai Wildlife Sanctuary
Photographs by S.H. Patgiri
Abdul Gani May 29, 2020 00:00 IST In Quest For ‘Black Gold’, Why Dehing Patkai, Amazon Of The East, Is Gasping For Life 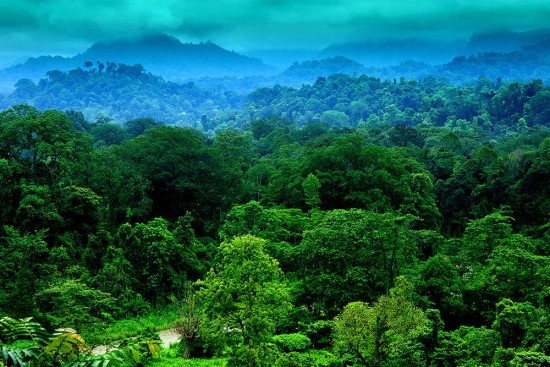 A forest sometimes shows up in two conflicting images. It could be a king-size portrait in high-definition jade—almost surreal, a place where gods descend to update their screensaver. Or a gothic single-tone of what it could become: bedeviled, stark, a dark hole swallowing space and time. Dehing Patkai is one such. It’s a wildlife sanctuary in eastern Assam bordering Arunachal Pradesh, one huge jungle in a cluster standing cheek by jowl to form a mega green belt. A carbon sink; the lungs of our land. It is the last remaining dipterocarp-dominated lowland rainforest. Dipterocarp? Those tall trees found mainly in SE Asia, harvested for resin and timber indiscriminately to near-extinction.

It is also a place where miners come for coal. Trucks move like a cohort of ants; heavy excavators and muddy and often barefoot miners, who work in slave-like conditions, grind away all day, all night. This is the colliery belt—close to the mining towns of Margherita (after an Italian queen) and Ledo (Stilwell Road to China starts here). Here the  British drove the mattock into the soft soil to prise out the ‘black gold’ for their steam engines, power plants and tea factories. This is tea county too. The original chaiwallahs, the Singphos, live here. The British came to this “heathen land of mosquitoes and leeches” for Singpho tea, and break the Chinese monopoly. 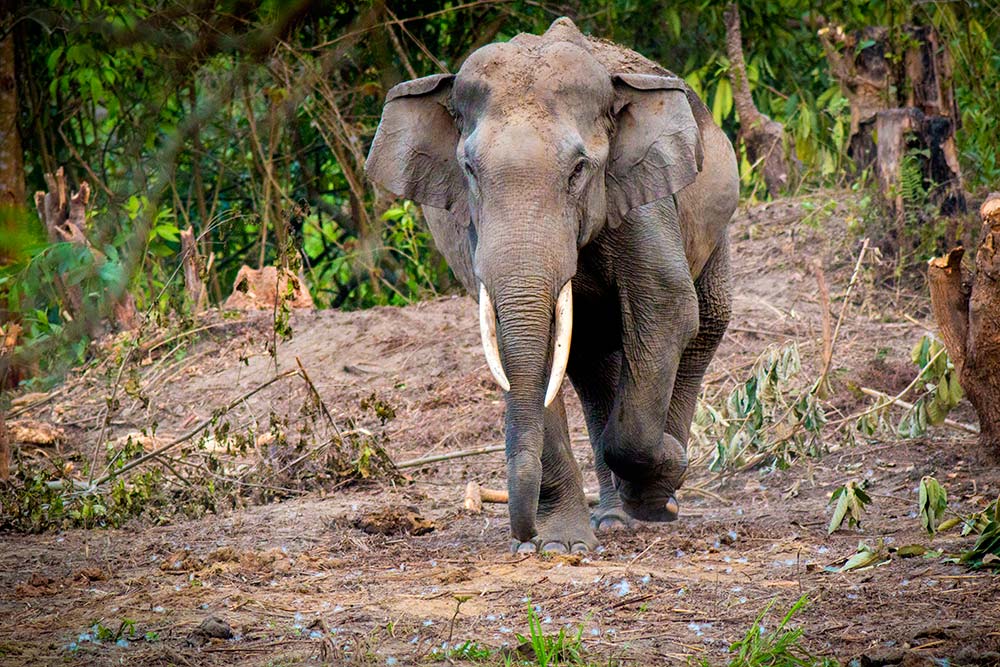 An elephant trundles through a clearing.

The forests around upper Assam have absorbed many horrors through their history and most traces of them have long since been allowed to vanish. So, how come this piece of prime asset, real estate, is now reconsecrated in the mind of the people as hallowed ground? Why politicians, student and farmer unions, environmentalists, activists, teachers et al—sequestered in their homes by a coronavirus—launched a movement, signed off their protestations with hashtags? #SaveDehingPatkai. Why an online petition at www.change.org attracted nearly 60,000 signatures in a matter of days? Because this is Dehing Patkai, and human greed is showing little sign of making concessions to the possibility that the ‘Amazon of the East’ could be gasping for life soon. 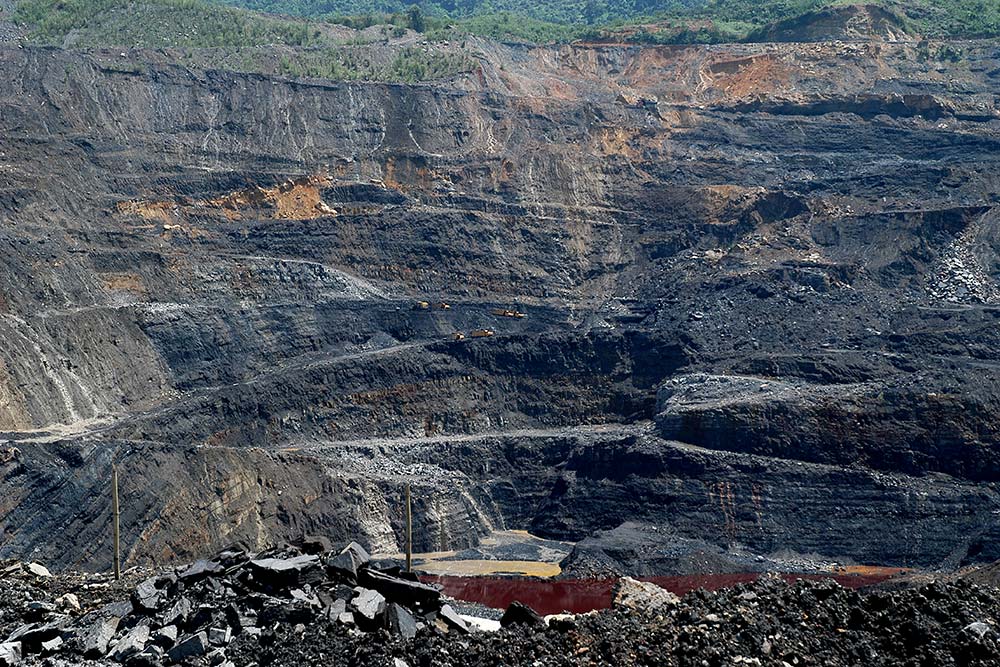 The rainforests straddling the Dehing river and the Patkai range of the Eastern Himalayas, which comprise the Indo-Burma global biodiversity hotspot, is a complex yet delicate ecosystem. It is not a contiguous mass, which it was a long time ago, but a jigsaw of green patches bound the jungles into a composite whole—some ‘reserved’, thus protected by the law, and some proposed to be reserved, where the law is lax. The Dehing Patkai Wildlife Sanctuary covering 111.42 sq km, and protected by law, is part of the system. Experts and the government say no mining was happening within the sanctuary. But there’s ample evidence of illegal ext­raction of coal in the peripheral Saleki Proposed Reserve Forest, which is a part of Dehing Patkai Elephant Reserve, spread across 937 sq km. The elephant reserve surrounds the wildlife sanctuary. 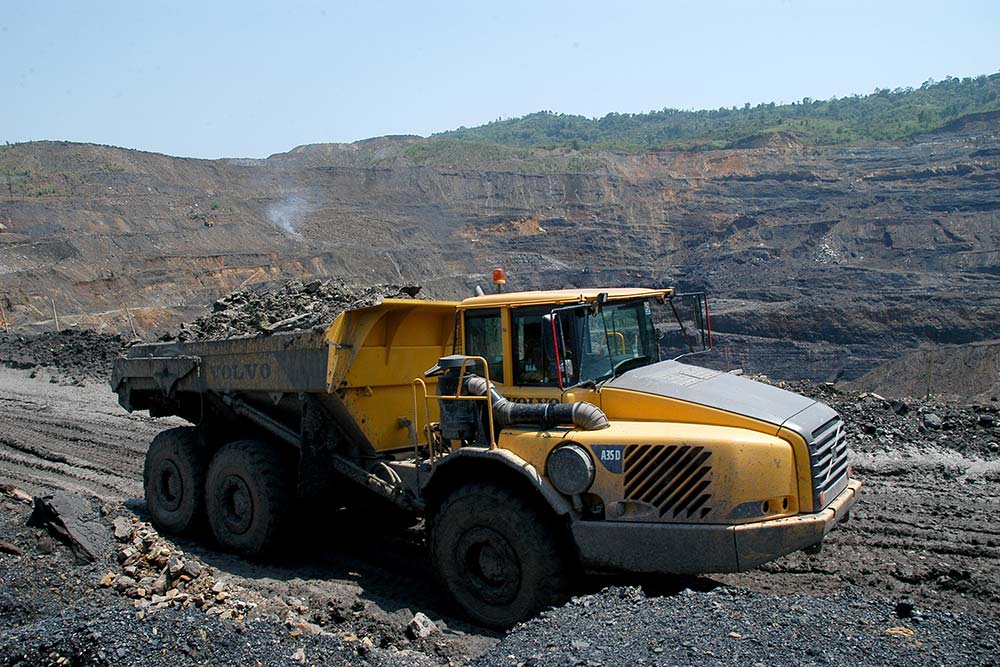 Opencast mining near the protected forest.

Coal mining has been around in the area since the British Raj. When coal mines were nationalised in 1973, the collieries in Assam were transferred to Coal India Ltd for a 30-year lease that ended in April 2003. It was the same year when the state government notified Dehing Patkai Elephant Reserve. The wildlife sanctuary was carved out in June 2004. But Coal India continued to mine in the area and sought clearance only in 2012. It was rejected and a fresh application was made in 2019 for 98.59 hectares in Saleki, where the PSU was operating already in 73 hectares. The Centre gave Stage-I clearance last December with 28 conditions, including fines. Accordingly, the Assam forest department slapped a Rs 43.25-crore fine on Coal India for illegal mining for 16 years since 2003. The coal major says it suspended operations in Saleki last October and is awaiting the Centre’s clearance. 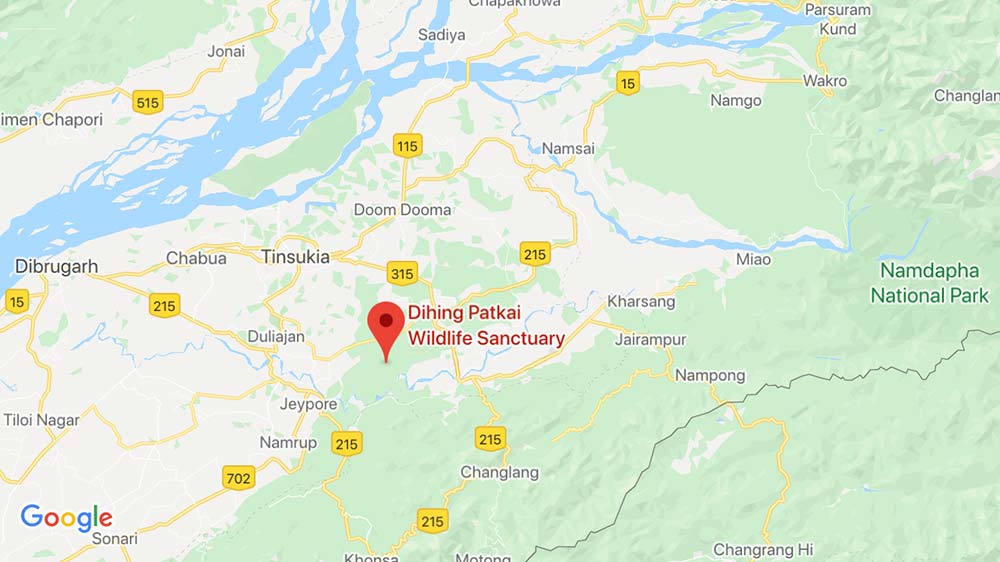 Things became deeper and more complex after the National Board for Wildlife’s (NBWL) decision this April to open Saleki for mining. Environment activist Rohit Choudhury found via an RTI response that the NBWL’s standing committee may have hidden facts while approving/proposing opencast mining in an area, called Tikok in Saleki, a shout away from the wildlife sanctuary. Official reports say Tikok falls within the eco-sensitive zone—within the court-mandated 10-km radius for a sanctuary, essentially a buffer where activities unsafe for a protected forest is not permitted. 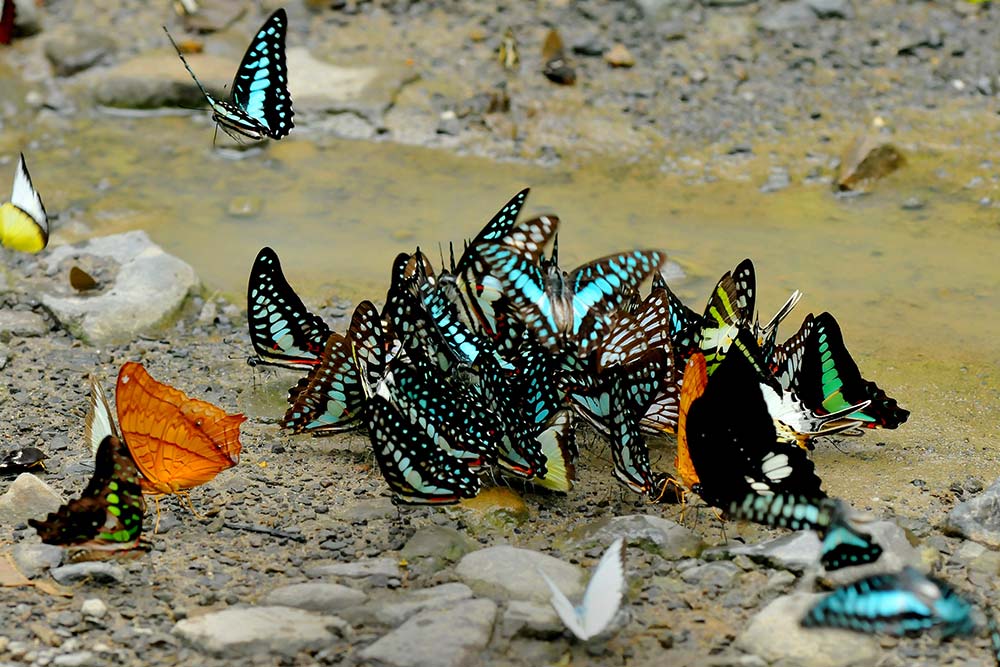 More danger hovered after the Union government decided on May 20 to open up commercial coal mining. Any private entity can excavate on a revenue-sharing basis. It’s a major shift from the government’s push for renewable energy in place of fossil fuel. India has one of the largest coal reserves in the world at 300 billion tonnes, yet it imports a fifth of its annual requirement. Rating agency Crisil says a spike in domestic production can halve the annual expenditure on importing non-coking coal. India can save Rs 45,000 crore, while power, cement and steel sectors will gain as these are the biggest consumers of coal. Privatisation brings in its wake fears of the mines spilling unchecked into protected forests. There have been accusations already of a mafia/cartel operating rat-hole mines in the Dehing Patkai forests. Congress MP Pradyut Bordoloi says there could be around 5,000 of them. 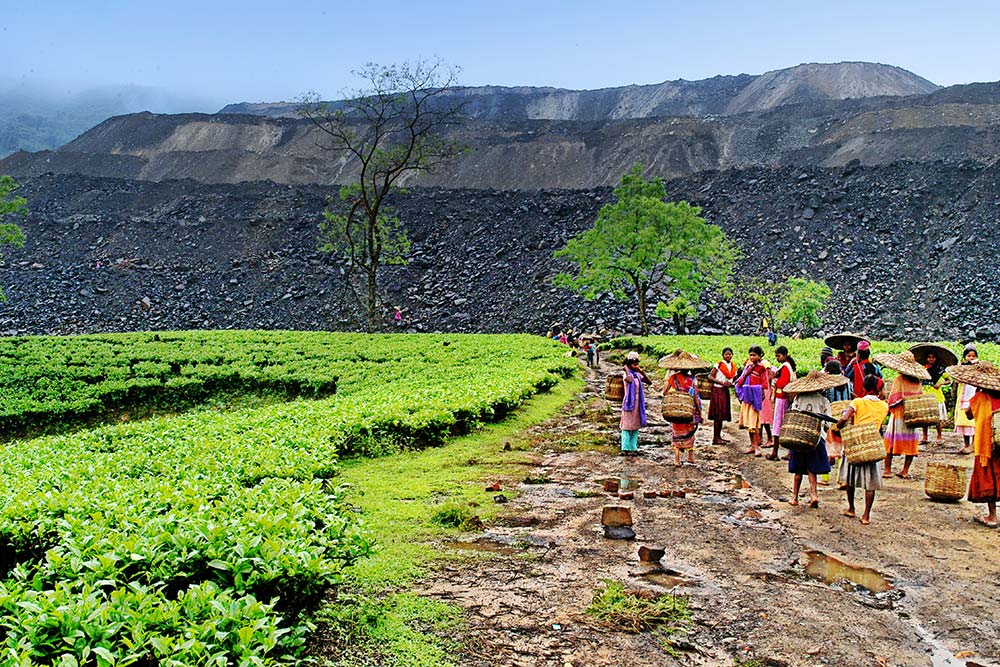 A tea garden set in the backdrop of an opencast mine. Upper Assam has the highest concentration of tea plantations in India..

Saleki already suffers from logging and hunting, both against the law. Giving legitimacy to the illegal collieries will compound its problems, environmentalists say. Pollutants seeping into the rivers and ponds, and floating in the air, will obliterate the ecology. The immediate impact, experts warn, will be felt by the river fishes, water birds as well as nesting sites of species like the Austen’s Brown Hornbill, currently known to have a viable population only in Dehing Patkai and Namdapha National Park, about 80 km away in Arunachal. “The urgency with which many projects are cleared raises doubts about whether due processes were followed. These decisions would have long-term implications,” says Narayan Sharma, assistant professor at Cotton University. 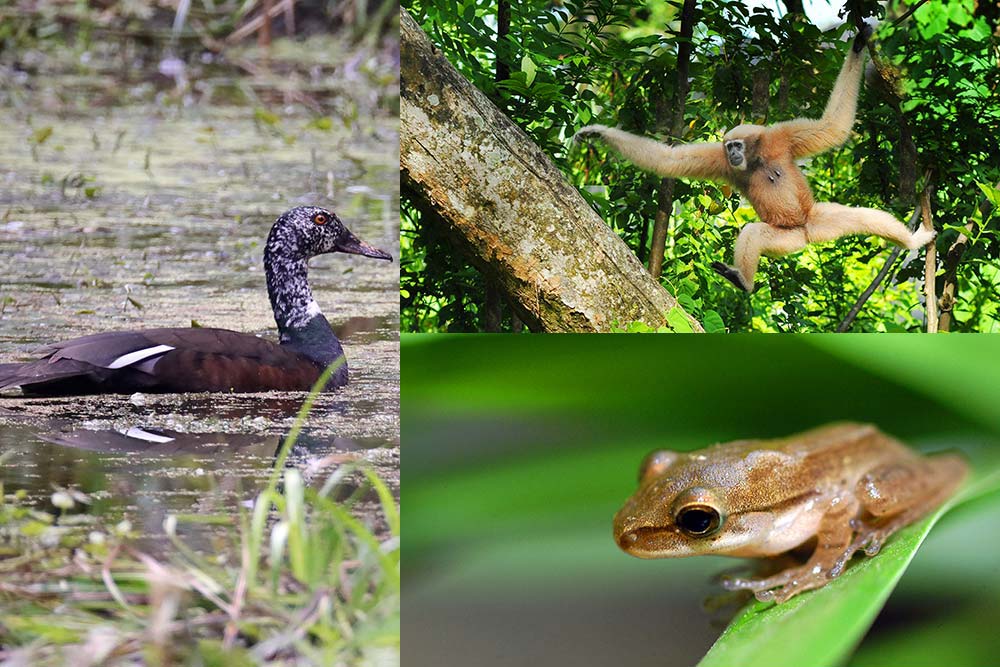 The White-Winged Duck, Assam’s state bird; a hoolock gibbon; a tree frog. The wildlife diversity of Dehing Patkai is rivaled only by the Amazon rainforest.

Dehing Patkai shelters an array of wildlife: seven species of primates like the Western Hoolock Gibbon; seven varieties of wildcats from the tiger, the clouded leopard to the marbled cat. It has the highest diversity of wildcats anywhere in the world. There’re more than 350 butterfly species; above 400 different birds, including White-Winged Duck, Assam’s coy state bird; Hollong, the state tree, and the Fox Tail Orchid, the state flower. And the majestic elephant. The one with the green thumb, the tireless gardener, clearing the forest for new trees to grow. They move in corridors throughout the Patkai, alt­hough much restricted by the ever-exp­anding towns and villages, tea gardens, coal mines and the oilfields (the region has that too, and the nation’s oldest refinery town Digboi got its name from an excited British official’s command to his coolie, “Dig Boy!” After he sniffed oil on a porter elephant’s legs.) 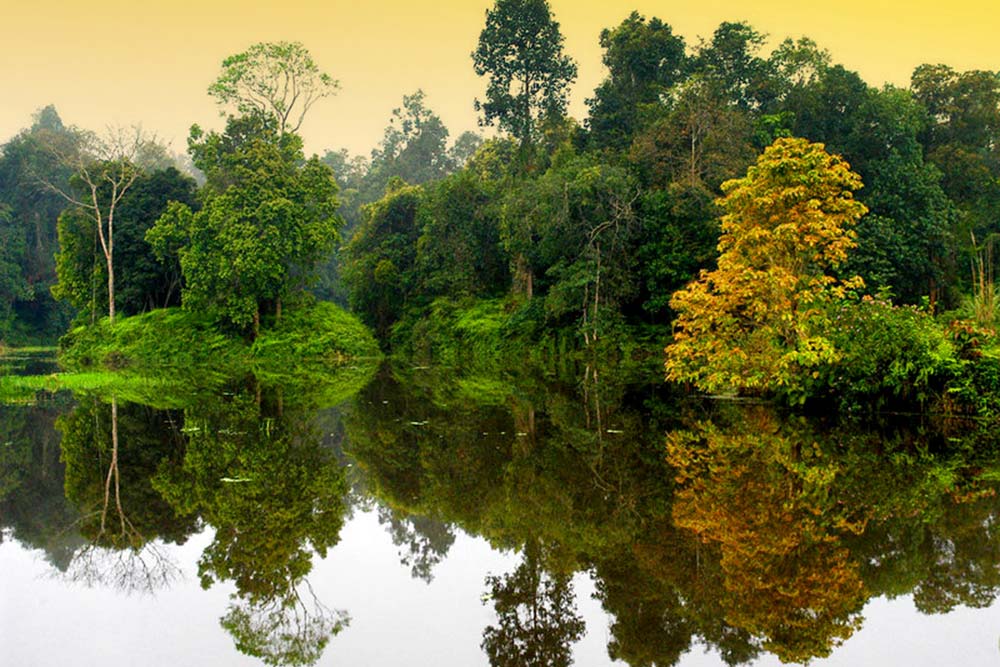 Human-animal clashes are common in the area. “If the habitat shrinks further, expect more men-elephant conflicts and that won’t be good for both,” says Udayan Borthakur, wildlife biologist and nature photographer. Even former chief minister Tarun Gogoi has joined the campaign to tamp down on illegal mines that environmental groups say have reached epidemic scale. “Today the whole world is facing the problem of climate change and you are the champion for preserving ecolo­gical balance...I, therefore, on behalf of the people of Assam request you to kindly withdraw the decision so that it will remain as an Asiatic biodiversity hotspot and elephant reserve,” he wrote to Prime Minister Narendra Modi. Answers are sought from Gogoi too. Why he didn’t stop the mines when he was CM for 15 years and the Congress ruled the country? The eco-­warriors face similar questions. Didn’t they know about the illegal mines? Or, did they choose to keep quiet? 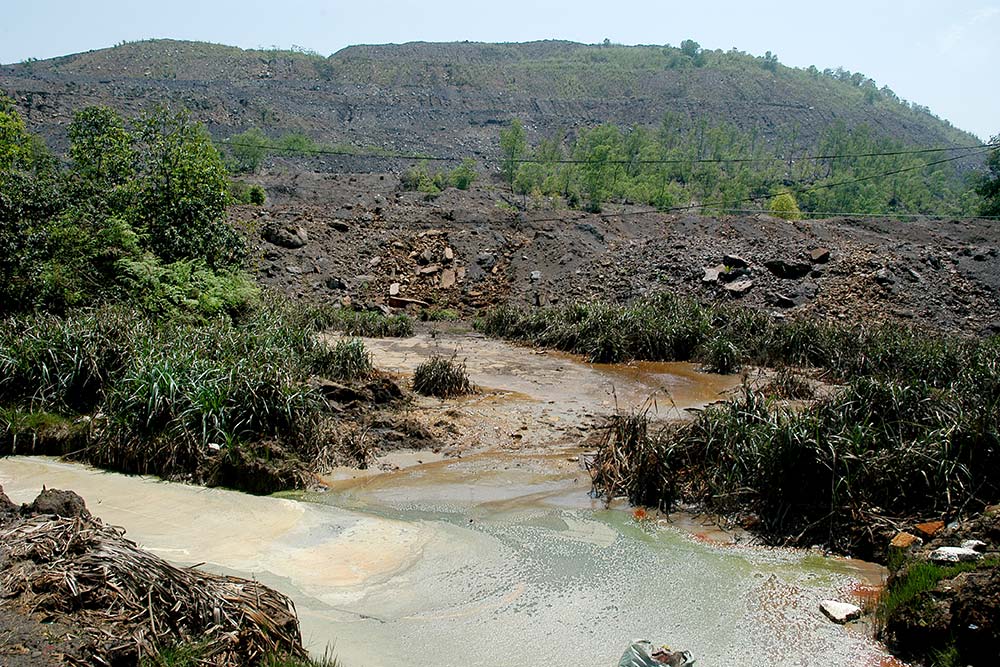 Acidic waste from the collieries seeps into the water channels.

The people want the world to protect the rainforest, a bulwark against global warming because of the vast amounts of heat-trapping carbon dioxide it soaks up from the atmosphere. For them, Dehing Patkai has no demarcated border. It is a vast interior dotted with rivers, forests and tales, a remote expanse filled with meaning. It’s an idyll world, except for the context. Those who mind don’t matter, those who matter don’t mind.

By Abdul Gani in Guwahati —with inputs from Rituparna Kakoty