Theatre and films plays a big role in Tamil politics. MGR was a crowd-puller and Jayalalitha was a gamechanger. Rajinikanth and Kamal Haasan are slowly making their political ambitions clear 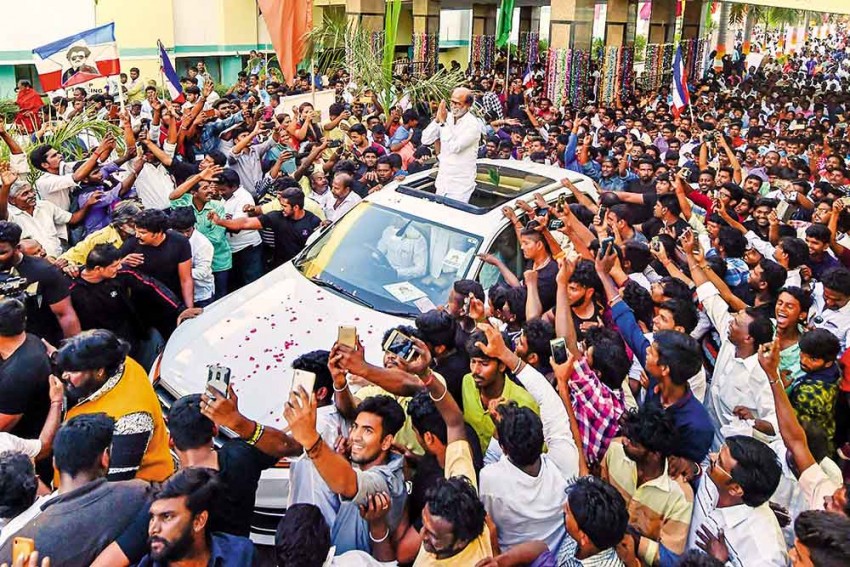 Rajnikanth basks in his fans’ glee as he makes his political ambitions clear in 2018
Photograph by PTI
G.C. Shekhar May 02, 2019 00:00 IST Reel Life Vs Political Life: Can Tamil Superstars Rajinikanth, Kamal Haasan Be Thalapathi? 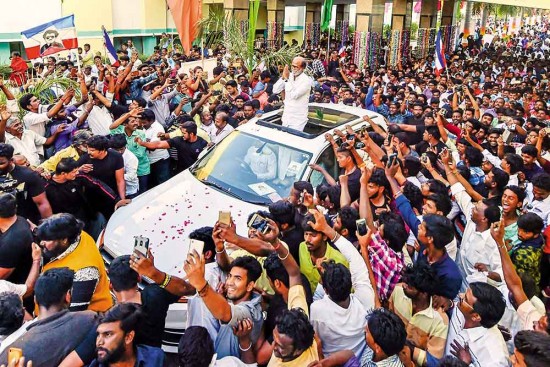 In a memorable scene from Anbu (2003), Tamil comedian Vadivelu is shown manning his party’s campaign booth outside a polling centre. He stops a voter and asks him if he voted for his party’s ‘coconut tree’ symbol. The voter swears he did and after much prodding reveals that he voted thus in exchange of the money received from Vadivelu and—cry out laughing—for the opponent’s ‘ladder’ symbol as well, for the money received from him. “I stamped on both the symbols for the money I took from both!” he explains.

The next voter, when coaxed similarly—about voting for the ‘coconut tree’—ass­erts that he did, saying proudly that he has been party to this quid pro quo transaction for 15 years! “So this is the way these guys had been voting for 15 years?” asks Vadivelu, startled and agape.

A masterful comedian, Vadivelu would not have anticipated that he himself would become a victim of electoral politics a decade later. In 2011, ahead of a bitterly fought assembly polls, a defensive DMK deployed Vadivelu, reportedly at a high price, since he was at his cinematic peak, to take on DMDK leader Vijaya­kanth, who had joined hands with AIADMK supremo Jayalalitha, thus helping her consolidate anti-DMK votes.

At meeting after public meeting, Vadivelu would tear into Vijayakanth, targeting his unseemly hurry to become CM within a few months of starting his party. “If Vijayakanth is chief minister, then I am prime minister. If he is PM then I am President. If he is the President, I am Obama,” Vadivelu taunted.

Unfortunately for Vadivelu, the DMK lost badly, Jayalalitha returned to power and Vijayakanth emerged as leader of the Opposition. Though there was no overt diktat, Tamil film-makers quietly dropped Vadivelu from their projects. A sudden persona non grata, scenes shot with Vadivelu were either remade with other actors or chopped off. Vadivelu’s career never quite recovered. “Vadivelu bec­ame an outcast overnight, as the film industry feared that obstacles would be placed before the release of films featuring him,” admits a top producer. Though filmdom ditched Vadivelu, ‘memedom’ readily acknowledges his influence—brilliant body language, dialogue delivery, his expressive contortions—as it freely borrows from his video clips and movie images for readymade templates to poke fun at political leaders.

Vadivelu’s predicament was not new to Tamil Nadu. In a state where films have an inordinately deep social-psychological-emotional hold over the populace, filmstars have been arrayed in opposing political camps ever since the DMK used theatre and cinema as vehicles of socio-­political propaganda. Sivaji Ganesan, who in his first movie, Parasakthi, mouthed the rasping dialogues of Karunanidhi against social evils, soon emerged as the DMK’s filmi mascot till he was found visiting Tirupati—that went against the DMK’s atheist, anti-­Brahminical slant.

In stepped MGR, who soon wormed his way into (DMK chief) Annadurai’s good books and became the party’s main crowd-puller, thus sparking his rivalry with Karunanidhi, considered the other DMK star. When MGR was shot by actor M.R. Radha ahead of the 1967 assembly elections, propaganda photos showing MGR with a bandage around his throat garnered much sympathy, helping DMK to capture power for the first time.

In recent decades, Tamil stars have stayed on the right side of politicians in power. Kamalahaasan learnt it the hard way. Rajni criticised Jayalalitha in 1996, but fell in line after she returned to power.

After Anna’s demise in 1969, MGR initially backed Karunanidhi, but subsequently the two fell out as Karunanidhi promoted his son M.K. Muthu as a screen hero to belittle MGR. Sivaji, meanwhile, had settled down in the K. Kamaraj-led Congress, but remained politically insignificant. The only time he contested elections was in 1989, when his new outfit teamed up with MGR’s widow Janaki—and both bit the dust. Karunanidhi’s rivalry with MGR continued with unabated vigour under Jayalalitha when she inherited her mentor’s political legacy in 1988.

Rajnikanth was luckier when he had taken Jayalalitha on before the 1996 assembly polls. His famous words, “Even god cannot save Tamil Nadu if Jayalalitha returned to power”, proved to be a potent political punchline. Jayalalitha was routed. When she stormed back in 2001, the same ‘superstar’ was quick to make up, praising ‘Amma’ at a film fraternity show to hail her leadership against killing the bandit Veerappan.

Actually, most Tamil filmstars have stayed on the right side of the ruling dispensation. Only Kamal Haasan learnt about the perils of taking on the state government the hard way. In 2013, ahead of the release of Vishwaroopam, Kamal refused to trim scenes found offensive by Muslim outfits. When Jayalalitha banned his movie he challenged it in the high court. Failing to get any jud­icial rep­rieve, he had to agree to its censoring.

So long as Jayalalitha and Karuna­ni­dhi were active, both Kamal and Raj­ni­kanth kept their political ambitions bottled up, lest their films run into trouble. Only after their demise did the two venture to make such plans public.

One reason why stars choose to play coy, unless firmly goaded on by major parties, is to ensure a smooth run for their movies, for the state government has a tight control on ticket prices and tax exemptions. For inst­ance, many from the DMK’s first family got into film production and distribution. “The period between 2006 and 2011 saw Karunanidhi’s grandsons Udayanidhi and Durai Dayanidhi and grand-nephew Kalanidhi Maran take control of Tamil cinema. Even top heroes were in attendance if the film fraternity org­anised a show to felicitate Karunanidhi,” points out a film PRO.

The absence of independent film-­makers, unlike in Bollywood, was ano­ther reason why there was little open dissent in Tamil cinema, observes film historian G. Dhananjayan. “Whereas Om Puris, Shabana Azmis and Naseeruddin Shahs could speak their mind on issues, Tamil stars, used only to adulation, played it safe. Only now do we have independent directors like Ram, Pa. Ranjith, Vetrimaaran and Raju Murugan who not only make poli­tical films but also voice their views on other platforms,” he points out. Still, stars prefer silence on major issues.

Even when film-makers take a stand against a ruling party on issues like Jallikattu, Sterlite and NEET, they have to take care not to be identified with the Opposition. Recently, director Karu Palaniappan, a staunch BJP critic, was hailed for his principled stand on various issues, till he appe­aled for votes for the DMK.

“Currently, if a film personality has to command respect he needs to be politically aware and articulate but not identified with a party,” admits R.J. Balaji, a radio jockey turned filmstar. In LKG, a biting political satire, Balaji’s dialogues drew great applause, as they took potshots at the nature of Central and state politics, but without naming any outfit. Once, Tamil filmstars stepped into politics directly from the screen and roused fanatical, near-demagogic support; later, they tiptoed around politics, bowing before power. Politically unfettered at last, they are free to be roving, independent critics who speak their minds.