Ranikhet is home to the Kumaon Regimental Centre; ­almost every village in this belt has men in the army. They need no sermons on patriotism: living and dying for the country is a way of life here. 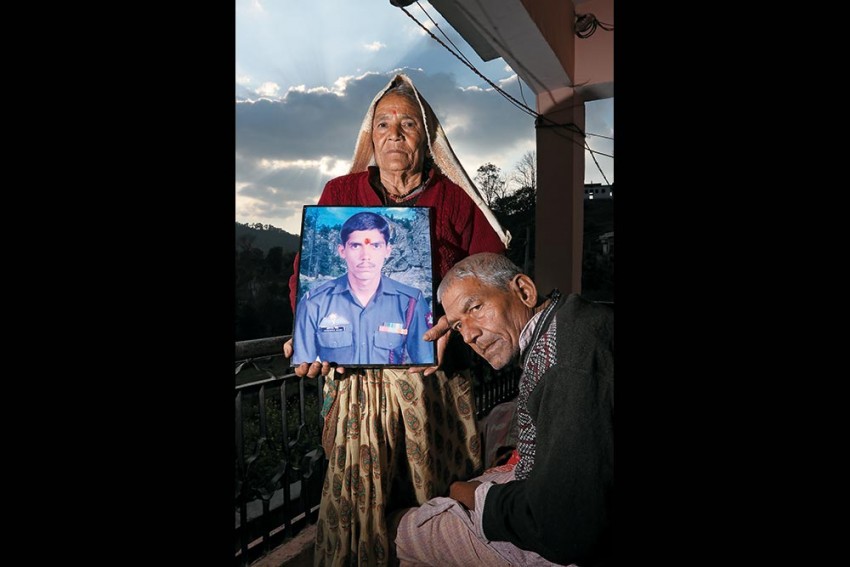 Photograph by Suresh K. Pandey
Salik Ahmad March 14, 2019 00:00 IST Living And Dying For The Country Is A Way Of Life Here 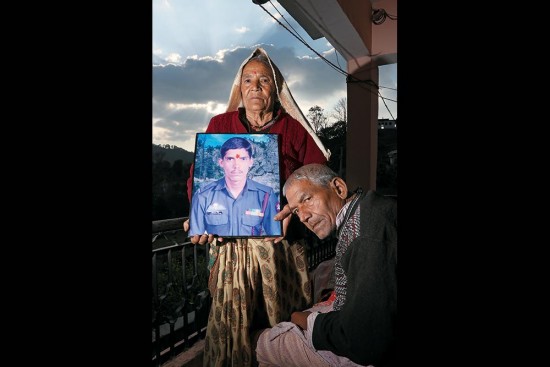 You feel it on your skin every moment in this house: there is a gap, a yawning gap, between reality as a felt, lived thing and the story it becomes. For the public, the Indian soldier-martyr is an emblem, his sacrificing family an aura-laden legend. Reality is here, and it bites. Sher Singh Bisht, 82, is a retired army subedar. Paralysis chokes his nerves. His wife, Janaki Devi, ten years younger, struggles to retain her sanity. Years have passed, but her pain is without end: her elder son, Jogender, was killed battling Kashmiri militants in September 2003. He was just 25 and did not even once see his infant daughter.

There’s also a gap between the picture-postcard prettiness of Ranikhet, its green-clad hills and valleys, and the vacuum in their lives. The prime-time anger of faraway TV studios, where their names are taken in awed tones, stirs not a leaf in their mind. “Jo poochhne wala tha, wohi chala gaya, ab kaun poochhega? (He who would have really cared, he’s gone….)” says Janaki Devi, choking on her words. Her husband sits on a cot in the verandah, stoic and impassive, as she goes through that ritual: bringing out a framed portrait of her martyr-son from inside, walking gingerly so as not to strain the stitches from a recent surgery. The tears well up, words try but fail…the sobs win.

Ranikhet is home to the Kumaon Regimental Centre; ­almost every village in this belt has men in the army. They need no sermons on patriotism: living and dying for the country is a way of life here. But many of them feel soldiers’ families deserve more official care and empathy. Take the Bishts. After Jogender was gone, his young widow got about Rs 6-7 lakh—she and the kids live in Delhi with his brother’s family, sustaining on her husband’s pension. The parents got only about a lakh; they have to live off Sher Singh’s pension. The glory of martyrdom does not pay the bills: his medication alone costs Rs 15,000- 20,000 a month.

What if Sher Singh had no pension? How would have they survived? Once every two months, he has to be taken to Ranikhet for treatment—a round trip by taxi costs Rs 2,000. A week ago, his health had deteriorated and everyone was called to be with him in his “last moments”. Others have left, only a nephew, Shyam, has stayed back.

Young Shyam curses governments of all shades and hues. “When we go to the army hospital, they say there are no doctors available. Even when we say he’s a martyr’s father, we aren’t taken seriously,” he says. A few months back, CM Trivendra Singh Rawat had held a function to honour the widows of martyrs. “All women, including my sister-in-law, gave letters to the CM stating their problems. They haven’t heard back.” In a few days, Shyam too will return to his cloth factory job in Delhi, and the old Bishts will be alone again.