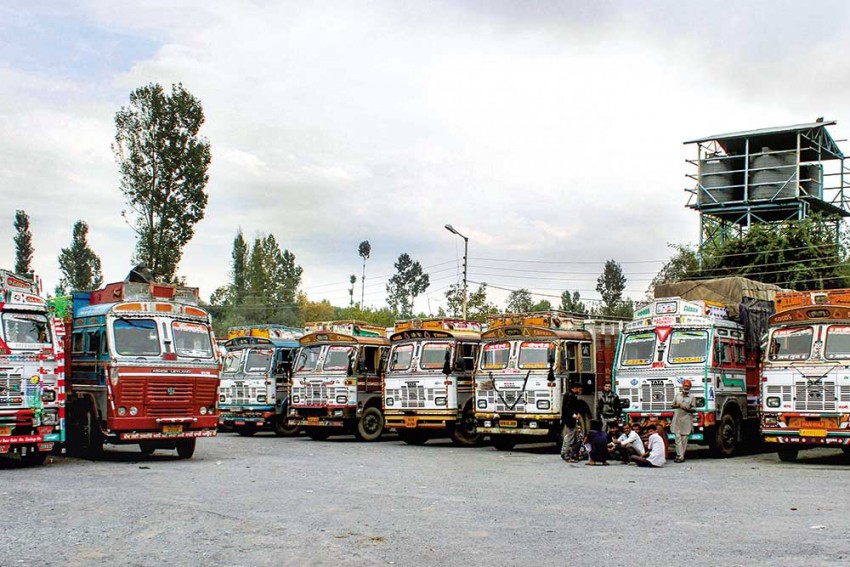 Trade Corridor
‘Safe zones’ such as this one in Shopian have been set up for fruit dealers following the killings
Photograph by PTI
Naseer Ganai October 23, 2019 00:00 IST Bloody Apple Trade - J&K's Fruit Trade Pierced By Bullets, Article 370 In Focus Again 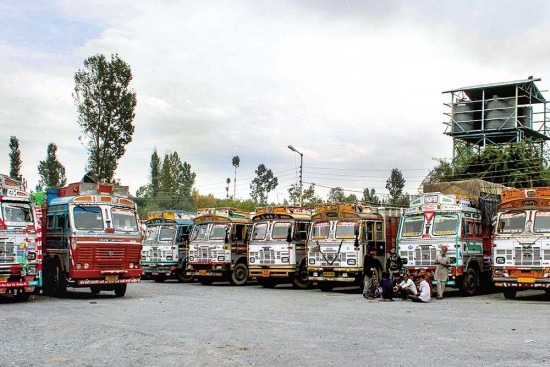 The recent killing of three non-Kashmiris in the Valley has sent shock waves among non-local transporters waiting to ferry apples out of the region. Apple traders Charanjeet Singh and Sanjay Charaya were attacked at Trenz in Shopian district by a group of three or four armed men around 7.30 pm on October 16. A local fruit grower rushed them to the district hospital in Pulwama, where Singh was declared dead on arrival. As Sanjay’s condition was critical, he was shifted to the SMHS hospital in Srinagar. Hailing from Punjab, Charanjeet and Sanjay had gone to Trenz, where 10 labourers from Punjab were loading boxes of app­les on a truck.

Sanjay’s family flew to Srinagar on the morning of October 17 after they heard about the attack. Jaspal says all labourers from Punjab have gone back. Sanjay’s father, Jaspal Charaya, says “unknown gunmen” fired three bullets at his son. “Doctors say it will take him at least six months to recover,” he adds. For the past few years, Sanjay had been transporting apples from the Valley to Punjab and other places. His uncle Subhas Chandar is in the fruit business and sends his vehicles and labourers to the Valley. “It is tragic that the Kashmiri fruit grower who risked his life to take Sanjay to the hospital is being summoned by the police,” Subhas tells Outlook, adding that the name of the fruit grower should not be revealed as he might then be targeted by the “unknown gunmen”. This familiarity with the Kashmir situation in Sanjay’s family comes from years of trade relations with Kashmiris.

Some hours before Charanjeet and Sanjay were attacked, a brick kiln wor­ker, Sethi Kumar Sagar, was shot dead when he was taking a walk with his friend near his workplace in the Neh­ama area of Pulwama. Two days earlier, driver Sharif Khan from Rajasthan had been killed and his truck set ablaze. Two gunmen appeared in an apple orc­hard in the interiors of Sugan village in Shopian, and asked Sharif and his conductor, Mohammed Akram, to get into the truck. Residents of the area tried to intervene, but the gunmen didn’t relent. Sharif’s killing was the first attack on a non-local since the revocation of Arti­cle 370 on August 5, and caused most transporters from Rajasthan to postpone their planned trips to Kash­mir. Many drivers had to drive empty trucks back to their states.

“What was the need to revoke Article 370?” asks a truck driver from Hoshiarpur, who has been coming to Shopian for 10 years now. “Kashmir is now a completely different place and I do not feel safe here anymore. I don’t even get food at roadside eateries as everything has been closed here for over two months.”

The harvest of apples usually continues till mid-November and some of the varieties grown in the upper reaches of Sho­pian are still to be picked. In one harvest season, around 7,500 trucks are needed to transport the apples, while the district has only around 250 trucks bel­onging to locals. Apple growers want the government to waive Kisan Credit Card loans for easing their burden in the wake of the uncertainty about transportation of their produce. They also complain that consignments loaded on October 9 were stuck on the highway until October 15­—and the delay is spoiling the fruits. 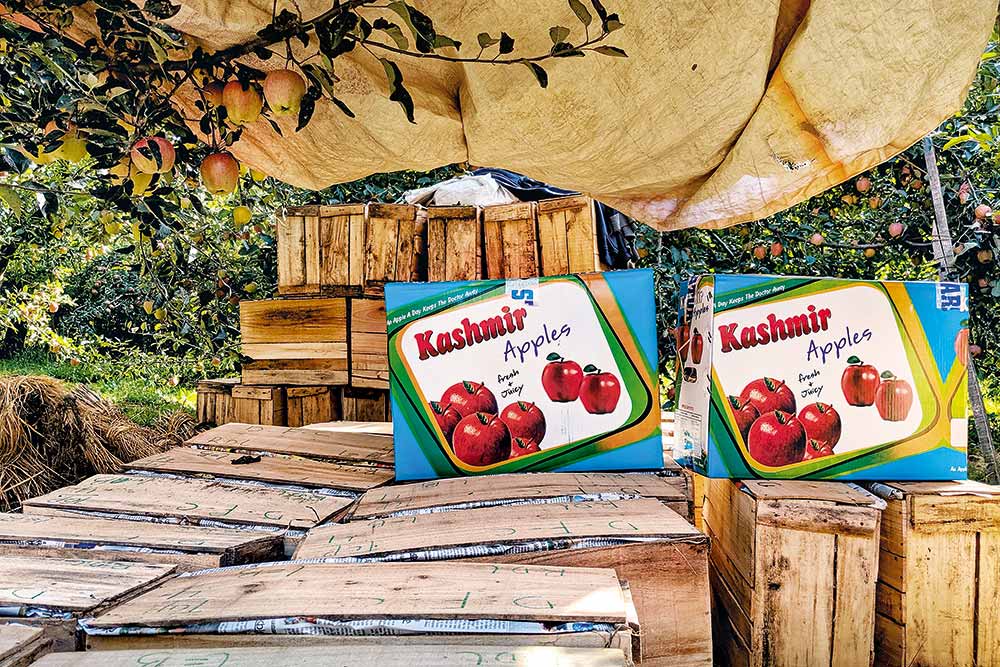 Cartons of apples wait to be transported.

The government claims that the killings are part of militants’ plan to derail Kashmir’s economy and have nothing to do with the abrogation of Article 370. K. Vijay Kumar, advisor to the governor, who also looks after the home department, says militants are using the revocation as an excuse. “If the situation stabilises in Kashmir and there is peace and development in the region, how will that be useful to terrorists?” asks Kumar. “We are very clear about why these fellows (militants) are doing it. They are playing a very dangerous game and trying to terrorise the public. It will not work in the long run. The relationship of these lab­ourers and truck drivers with Kashmiri fruit growers is of more than two decades. They stay in the houses of the growers. They know and trust each other. I don’t think these acts will alter the relationship. The government is clear about how to go about tackling these attacks.”

“If such killings ­continue, then Pakistan and the militants are up for a dangerous game,” says a police officer in south Kashmir.

According to the army, the Valley rem­ained by and large calm since the revocation of Article 370, contrary to the expectations of Pakistan and Kashmiri separatists. “People are inching towards normality and whatever had been said about what would happen after the revocation did not actually happen. Terrorists and Pakistan did not like this, and that is why they have started targeting non-­locals,” says a senior army officer, adding that militants are looking for a trigger to involve people in mass protests and these acts of violence against non-local labourers should be seen in that context.

A senior police officer posted in south Kashmir, however, strikes a contrary note. He says a massive political earthquake hit Kashmir on August 5 when Articles 370 and 35A were revoked, with leaders of the mainstream parties held in preventive detention. “We have heard that the truck drivers from Punjab were fired upon after being asked their names. These killings should be seen as the first such killings linked to the larger discourse around Article 370. When you talk about constructing 50,000 temples, buying land in Kashmir, dating girls from the Valley and changing the demography, you are playing into Pakistan’s hands. When you asked every non-local to leave Kashmir ahead of the revocation, you played into the hands of Pakistan. These killings are part of the ‘settler discourse’. If it stops here, then it is not part of the pattern, but if such killings continue, then Pakistan and the militants are up for a dangerous game,” the officer warns.

The BJP, predictably, trashes such arguments. Its leaders say the killings are “part of the same terrorism that has murdered thousands in Kashmir since 1990”. “We must not link the killing of these poor lab­ourers with the revocation of Article 370. These innocent labourers were shot dead like hundreds and thousands have been killed over the years in the Valley,” says BJP leader Sufi Yousuf, adding that militants have resorted to killings because they were shocked by the “calm reaction” of people to the revocation.

Sofi also says his party will renovate ­existing places of worship and shrines in the Valley. “We are not constructing any new temple. We are only renovating the existing ones. We are also renovating Muslim shrines. We are out to restore the syncretic Sufi culture of Kashmir,” he says. BJP general secretary Ashok Koul tells Outlook that an “outsider” has been killed in the Valley and it should evoke concern there. “If someone from J&K is attacked or harassed outside, people in J&K react sharply. I think there should be the same reaction this time too,” he adds.

The government has stated it is “deeply concerned” about such cases. Senior security officials visited Sanjay at the hospital and the security forces provided accommodation to his family in Srinagar. The governor’s administration is working on a proposal to provide security to ­migrant labourers in the Valley.