The police brutalities against the Maynals and Hussains look very timely for BJP with bypolls in six Assembly elections lined up. 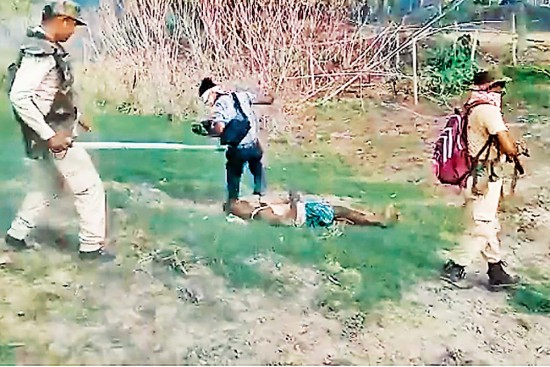 Maynal Hoque had just wit­­ne­ssed policemen beating up his 14-year-old daughter Sonia. Enraged, he picked up a stick and ran at the cops in riot gear and arm­­ed with auto­matic weapons. As is to be exp­e­c­ted in the speedily emerging ‘new’ Assam—where policemen have vir­tually been given the license to shoot first and ask questions later in the guise of self def­e­nse—he was brought down by a bullet in the chest, with no attempt made to overpower him by the scores of cops.

What followed in Gorukhuti village under Sipajhar revenue circle in Darrang district of central Assam on September 23 will be etched in memory, till another such incident relegates it to the trash can. As Maynal lay motionless, an official photographer, Bijoy Shankar Baniya, assigned to the team of district administration officials and policemen to record the eviction of the Maynals and Sonias, stomped on him, kicking and kneeing the prone body. A couple of cops too joined, hitting the limp body with batons and rifle butts. The video clip went viral, drawing scorn, and Baniya landed in jail.

The incident, in which three people—Maynal, 12-year-old Sheikh Farid, and Saddam Hussain—died when cops ope­ned fire at villagers resisting eviction from land they have inhabited for decades, can be traced to the BJP government’s recently announced decision to free encroached land. In Sipajhar, the government has decided to start a community agriculture project, and earmar­ked around Rs 9 crore for the purpose.

On September 20, the government had evicted 800 families from Dhalpur vill­­a­­ge in the same circle. There was no trouble there as not only had the evictees been assured of alternative land, but also shown the plots. This was not the case in Gorukhuti village. The villagers had agr­eed to relocate in principle—some had even demolished their shelters the night before—but on that day, they were shoc­ked and angered after police arrived in the morning and drove bulldozers over the remaining houses. In retaliation, they pelted stones and attacked the cops with sticks, leaving some of them inju­red, prompting others to open fire.

Assam chief minister Himanta Biswa Sarma has accused certain groups like the Islamist PFI (Popular Front of India) and some individuals, including a lectu­r­er of a local college, of instigating the villagers. “There were supposed to be 60 households. Where did 10,000 people come from?” he asked. He also alleged that a certain group had collected Rs 28 lakh from villagers, assuring them they would not be evicted. “But when they failed, they instigated the people to attack the cops,” he said. The governm­e­nt has ordered an inquiry in the matter by a retired judge of Gauhati high court.

The incident could not have come at a more opportune time for BJP, with by­p­o­lls for six assembly seats lined up in the coming days. Once more at centrestage is the “Bangladeshi”—an issue poli­tical parties have exploited for decades. History has already been revisited to rec­ollect how several indigenous people were killed in this very Gorukhuti area in 1983, at the height of the movement aga­inst “foreigners”. The Maynals and Hussains are seen as “illegal immigra­nts” from the neighbouring country, even if their names appear in the NRC, or they possess Aadhaar cards, or have been voting in Indian elections for years. The government now wants to take the land for “agricultural purposes” from those people who have been tilling it for decades. And the saga will be repla­y­ed again and again, as soon, the evictees will reappear on another char that eme­rges from the Brahmaputra as it keeps changing course, leaving them open to being labeled “illegal immigrants” all over again.

(This appeared in the print edition as "Blood On The Char")