BJP Has Emerged As The Nucleus Of Indian Polity: Bhupender Yadav 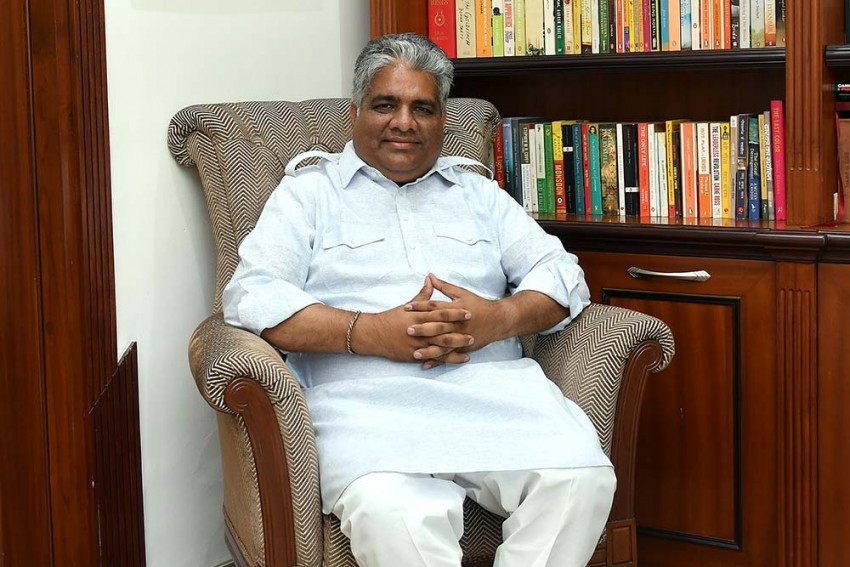 Photograph by Jitender Gupta
Bhavna Vij-Aurora May 30, 2019 00:00 IST BJP Has Emerged As The Nucleus Of Indian Polity: Bhupender Yadav 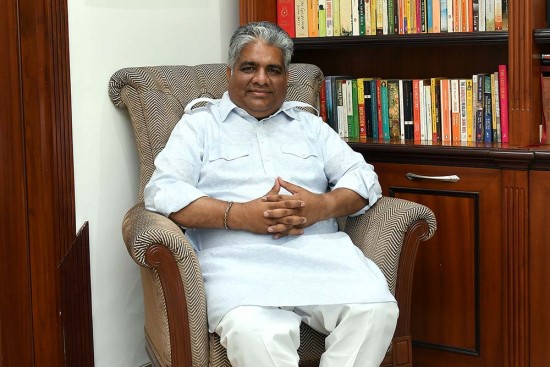 BJP national general secretary Bhupender Yadav, a Rajya Sabha MP from Rajasthan, is considered one of the architects of the party’s dominant performance in the Lok Sabha elections.  In-charge of party affairs in Gujarat and Bihar, he works closely with BJP president Amit Shah in expanding the organisation. He spoke to Political Editor Bhavna Vij-Aurora about how the BJP swept the nation. Excerpts…

The scale of BJP’s victory is immense. How would you sum up the party’s performance?

The biggest reason is Prime Minister Narendra Modi’s leadership and his government’s achievements. The first thing is the government’s sincerity towards implementation of welfare policies for the poor. The government worked in a transparent manner towards raising the living standard of the poor. The second important issue is of national security. Then there is the decisiveness of the government. The earlier UPA government was a victim of policy paralysis but PM Modi changed everything.  Also, five years ago, when we formed the government, India was among the fragile five economies of the world, and now India is in top five. That is one of the biggest achievements of the Modi government.

Along with the government, the party too continued to make strides. It inc­reased its membership to 11 crore and they underwent extensive training and contact programme. The government’s work was taken to the masses by crores of party workers under the leadership of Amit Shah. His leadership went a long way in ensuring BJP’s victory. When we came to power in 2014, we were ruling only five states, and now we are in power in more than 15 states along with allies. The BJP has emerged as the nuc­leus of Indian polity and a party that represents all sections of society.

The party lost three Hindi heartland states, including Rajasthan and Madhya Pradesh, just a few months ago. How did you turn around your fortunes?

Defeat in the assembly elections had local reasons and also anti-incumbency. There wasn’t much difference in vote share of both the parties. These elections were for Lok Sabha and for leadership of Modi.

They are two sides of the same coin. Modi is leader of BJP too. He has wor­ked in the organisation for a long time. They cannot be seen separately.

The PM has now added “sabka vishwas” to his slogan of “sabka saath, sabka vikas”. Don’t you think that the country has become more polarised in the last five years?

“When the BJP came to power in 2014, the party was ruling only five states; and now the BJP is in power in more than 15 states along with its allies.”

On the other hand, the Congress in its time brought a law that communalised criminals and divided society. The then PM said that minorities will have the first right. We are saying that the poor will have the first right, and in a transparent manner…When we promoted Aad­haar, the Congress opposed it even in court.  We brought the statutory commission for the OBCs. We introduced 10 per cent reservation for the economically backward without any discrimination. This is sabka saath sabka vikas policy and people have reposed their trust in it.

UP’s mahagathbandhan of BSP-SP was based on caste calculations. How did you trump the calculus?

Has the BJP managed to create a caste-neutral category of the poor?

When you pursue the goal of “sabka saath sabka vikaas” with sincerity then you are not dividing people on social lines. PM Modi said several times that our slogan of “samajik nyay” (social justice) is not to divide the people but to ensure that all sections of society get their rights. We cannot close our eyes to the fact we can have differences along social, economic, regional and geographical lines but our identity is that of an India and we have to take it to greater heights. That is our theory of nation first.

How do you explain the party’s performance in West Bengal?

“Despite differences along social, economic, regional lines, our identity is that of India and we have to take it to greater heights. That is our theory of nation first.”

Our workers put in a lot of effort in West Bengal over the last few years. The party president himself visited the state regularly in the past five years. Among the 120 seats where the party could do better, we had identified the ones in West Bengal and focused on them. As far as our Opposition’s (TMC) politics is concerned, Mamata Banerjee resorted to violence. There is no place for violence in politics and in democracy. Politics is not done for petty gains. People of Bengal have been at the forefront of India’s renaissance movement. They have been traditionally progressive and upholders of high values. Mamata Banerjee tried to destroy these values. The people have seen through it and are seeing BJP as a viable alternative.

Coming to sabka vishwas, do you think you can win the trust of Kashmiris as well?

Definitely. Last time, when there was a hung assembly in Kashmir and people thought that a democratic government should come, we came forward in the situation. The experiment (of forming a government with the PDP) was unsuccessful but we believe that in the coming time, we will be able to give a good government in Kashmir too.

We have reiterated our commitment several times. We have written in our sankalp patra (manifesto) too. Con­sensus should be built on the issue in the country. Regarding Article 35A, why don’t the so-c­­a­lled liberals realise that the women of Jammu and Kashmir face dis­­crimination.

What about the Ram Janmabhoomi dispute? Any resolution?

We have said that the issue should be res­olved at the earliest…The mediation process is on. The (top) court has kept the process away from newspapers. Even the date of mediation has been extended to August 15. Let’s hope for a positive outcome.

In a democracy, it is important to have an Opposition. What is your opi­nion of the Congress?

True, it’s important to have an Opposition but what kind of Opposition, that is for the political parties to decide.

The BJP still doesn’t have a majority in the Rajya Sabha. Is that a reason for worry for the party?

How will the next five years be different from previous five years?

The things that the government has done to win the trust of people in the past five years will be taken forward. In our sankalp patra, the party has talked about 75 targets for good governance to celebrate the country’s 75 years of Independence. Even PM Modi has said that the coming year will commemorate the 150th birth anniversary of Mahatma Gandhi and 75 years of freedom.

Modi-Shah ‘Jugalbandi’ Is The Biggest Story Of 2019 Election Mandate