Despite its achievements, the Nitish Kumar government continues to fall back on its time-tested strategy of raising Lalu's 'jungle raj' to win elections in Bihar 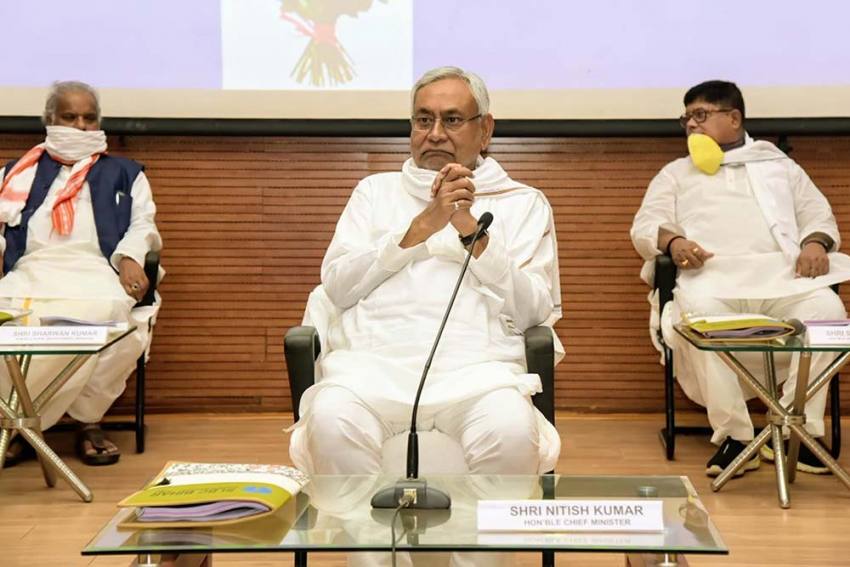 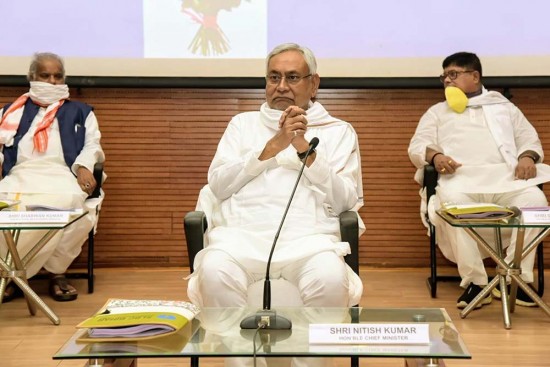 The clouds of uncertainty hovering over the upcoming Bihar assembly elections have not dispersed yet, with the Election Commission still mulling ways to hold it on time in the midst of a global pande­mic, but rival parties have already girded up their loins for a bitter battle ahead.

Even though there is no official word as yet on whether the voters in Bihar—the first state to go to polls in the post-coronavirus scenario—will be able to elect a new government as per schedule in October-November this year, there appears to be no ambiguity about what would be the main poll plank this time around: it will be 15 years of Nitish Kumar versus 15 years of Lalu Prasad Yadav.

Chief minister Nitish Kumar will complete 15 years in power in November and aim for his fourth consecutive victory in the polls since the NDA ended the 15-year reign of the RJD government under his leadership in 2005. From 1990 to 2005, Lalu and his wife, Rabri Devi, had shared the chief ministership, before Nitish scripted three poll victories in a row in the next decade-and-a-half. For a few months, of course, Nitish had handed over the chief minister’s chair to his one-time protégé Jitan Ram Manjhi after the crushing defeat of JD(U) in the 2014 Lok Sabha polls and also shared power for some time with the RJD after the 2015 assembly elections. But now, the battlelines appear to have been clearly drawn between the archrivals who look all set to make claims and counterclaims over their respective 15-year tenures to vie for the voters’ attention in the run-up to the polls.

Nitish made it clear when he set out to address the block-level JD(U) workers via video-conferencing to make them battle-ready. Exhorting the party cadre, he impressed upon them the need for apprising the new generation of voters about what kind of governance Bihar had witnessed during the 15-year rule of the RJD government between 1990 and 2005. “Remember, what kind of problems people had to endure during the reigns of pati-patni (Lalu and Rabri),” he told them. “Tell all about it to the new voters who will cast their votes for the very first time now. They must have been three or four years old when our government came to power. They are 18 years old now but may not have any idea about the situation that prevailed prior to our regime…Tell them that the law and order situation was so bad that people avoided coming out of their homes after dusk.” 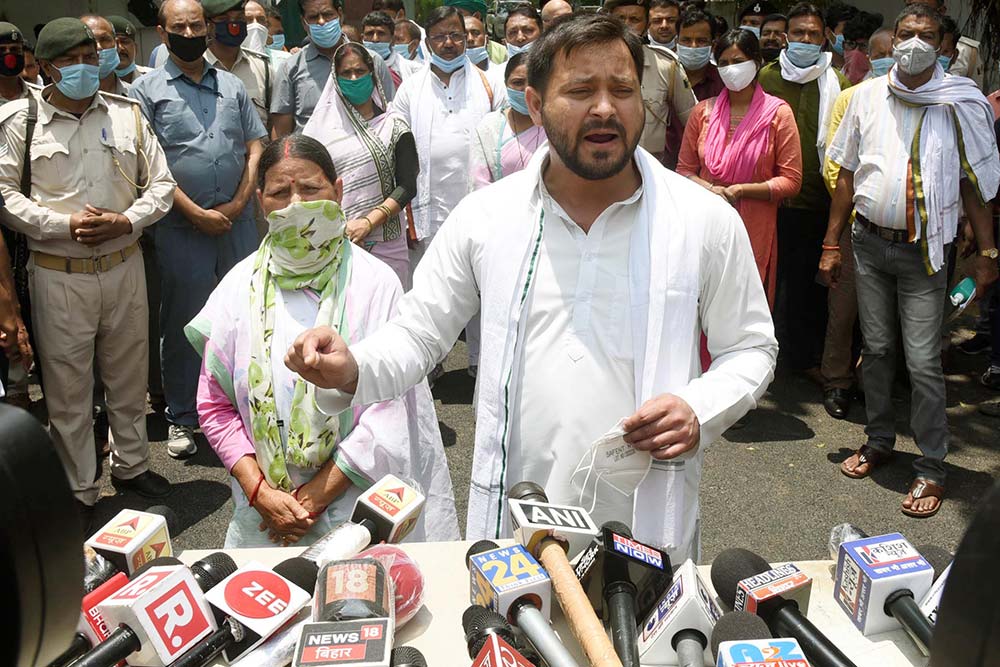 From the rise in Maoist violence to the pitiable condition of roads, electricity supply and healthcare, Nitish has set out to highlight the ‘failures’ of the RJD government during his sessions with the JD(U) cadre. He says that the 15-year per­iod preceding the NDA regime was an era of massacres and kidnappings. “Bihar has come out of that period now and the law of the land has been restored. But remember how Maoist violence had reared its head back then,” he said. “It was only after we began ameliorating the lot of the poor and marginalised people that the situation improved otherwise even the court had once observed back then that Bihar had turned into a jungle raj (lawless state).”

Tejashwi asks: If Lalu was corrupt, why Nitish formed a coalition with him in 2015?

Asserting that healthcare was in such a bad state that the government hospitals saw more animals than patients in their wards, he says that previous government did precious little for the state’s development. “Ask the Opposition what it did during those 15 years in power? What was the condition of the roads and the power supply in the state? What was the budget of the state like back then? Was anything done for infrastructure development or in any other field?” he said.

Taking a cue from their leader, other JD(U) leaders have also started raising the pitch of their criticism of the previous RJD regime. On Lalu’s 73th birthday on June 11, Neeraj Kumar, the party’s inf­ormation and public relations minister, released a list of 73 properties allegedly owned by the family members of RJD supremo through surreptitious ways. “The RJD president has acquired many properties in the name of his two sons and even an unknown third son in lieu of giving employment to people in the past,” he alleged. “Apart from Tej Pratap and Tejashwi Yadav, properties have been registered in the name of one Tarun Kumar, whose father’s name has been mentioned as Lalu Prasad Yadav in the documents. Who is this third son of Lalu Prasad Yadav?” he asked.

Stung by Nitish’s sharp criticism of the respective tenures of his parents, Tejashwi Prasad Yadav hit back, saying if Lalu Prasad was corrupt, why did Nitish join hands with him to form a coalition government with his party in the state in 2015? “Bihar will get nothing by your personal attacks on me. We are used to these derogatory attacks from last 30 years from all of you. Focus on real iss­ues, not my family (sic),” he tweeted.

Lalu’s eldest daughter Misa Bharti, a Rajya Sabha MP, clarified that Tarun was the other name of Tejashwi.

Tejashwi, who is the leader of the opp­osition in the Bihar assembly, said the chief minister and his ally, the BJP, would do well to focus on the real issues concerning the state, especially in the wake of the coronavirus pandemic. “Nitish Kumar and the BJP must concentrate on real ground issues vis-à-vis unemployment, law and order, migration , labourers, corruption. Communalism, governance, development, education and health infrastructure etc,” he said.

Tejashwi told the chief minister that even after being in power for 15 years, “your political employment in my family’s name says you’ve nothing to showcase”. “Your disastrous term will end very soon. It’s about time to pull down the facades and let the people of Bihar know immortality (sic) and corruption,” he tweeted.

Tejashwi has accused Nitish of having confined himself to home all through the lockdown. In protest, the RJD has now planned to beat drums across the state on June 24 if Nitish does not come out in public by then. The RJD has also released a set of questions asking the Nitish government, among other things, to explain as to how many jobs it had provided to people in the past 15 years. The party has also sought the district and caste-wise details of all the appointments made by the Nitish government in this period. “How many factories and industries have been set up and how many people migrated to other states in search of livelihood in 15 years since 2005,” the party asks.

Refuting Nitish’s allegations about the previous RJD’s regime, Jagdanand Singh, the party’s state president, says that his party had handed over a rather peaceful Bihar to the NDA government in 2005. “In 2005, Bihar had witnessed only 108 incidents of crime per lakh against the national average of 165,” he said. “In 2019, Bihar’s figures have risen to 222.”

Challenging Nitish for a debate on the issue, Singh said that the Bihar’s crime figures were only 141 per lakh when his party had come to power in 1990, which were reduced to 108 by the end of its 15-year tenure.

But it has made no difference to the NDA’s campaign against the RJD. Senior BJP leader and deputy chief minister Sushil Kumar Modi said that 1.35 lakh people from the backward sections had failed to get jobs during the reigns of Lalu and Rabri. “Vacancies for 5 lakh government jobs could not be filled ­because of the empty coffers of the state government during the RJD regime,” he says. “Had those vacancies been filled, 1.35 lakh people from the backward sections of society would have got employment.”

The ruling coalition’s salvos on the RJD come close on the heels of the ass­ertion of Union home minister Amit Shah that the NDA government would again be formed in Bihar under the leadership of Nitish Kumar. Lalu’s “lawless” regime has always remained the key issue in successive elections in Bihar and going by the ongoing slugfest, it is not likely to be any different now. Even though the Nitish government has had a big basket of achievements of its own to hit the campaign trail with, it apparently wants to fall back upon on its tried and tested ammunition: the bogey of Lalu’s ‘jungle raj’ which has helped it script victory in poll after poll.