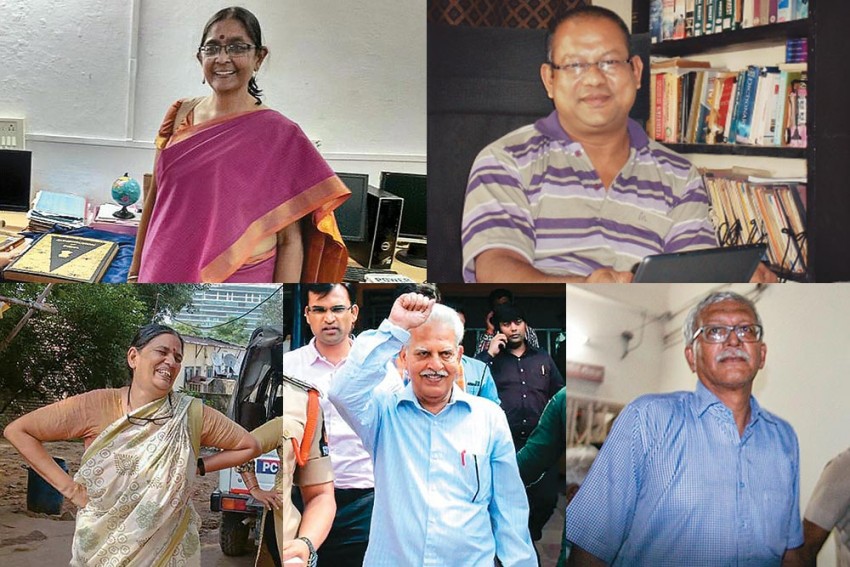 “It’s tough without him around. I am not hopeful of any positive outcome now,” says Meenal Gad­ling, wife of human rights lawyer Surendra Gadling, who has been languishing in Pune’s Yerawada jail for more than a year now. When Surendra was arrested from his house in the wee hours of June 6, 2018, Meenal never imagined it was going to be a long haul for her husband. The police allege he was among those involved in organising the Elg­aar Parishad meeting, and claim that speeches at the meeting led to violence in Maharashtra’s Bhima-Koregaon on January 1, 2018, in which one person was killed and several injured.

“They took away some CDs from our house. It was mostly children’s study material, projects and music CDs. And now they claim what they had recovered was Maoist ­material,” says Meenal.

More than a year later, with bail proceedings still continuing in the Pune sessions court, Meenal is losing hope in the judiciary. She says the case against her husband is fabricated and his incarceration an attempt to silence him. A homemaker, Meenal is running a small business to fend for her family now. “As a lawyer, his duty was to bring justice to Dalits and adivasis, and he was only doing his job. So the police branded him a Naxal,” says Meenal. It is a sentiment shared by many lawyers, human right activists and kin of the activists as they face inordinate delay in court proceedings, uncertainty in even getting bail and financial pressures. The lack of basic amenities such as cot, chair, fan and table to the undertrial prisoners is also worrying.

Meenal, Surendra Gadling’s wife, says the case against him is ­fabricated and his ­incarceration an attempt to silence him.

Family members of the activists bel­ieve there is a clear attempt to muzzle their voices as the police narrative has changed over the past year from Bhima-Koregaon violence to an alleged plot to assassinate PM Narendra Modi. Last November, the Maharashtra police claimed to have stumbled upon a Maoist conspiracy to assassinate Modi and overthrow the government while investigating the Bhima-Koregaon case. As evidence, the police cite an email dated April 18, 2017, that they claim to have seized from Wilson’s laptop. Several lawyers have questioned the veracity of this and other letters allegedly written by various activists that the police have relied upon. “The prosecution has a weak case,” says a senior lawyer. “They are relying on some data recovered from somebody’s computer. The letters are not even addressed to the accused, nor signed by them. The scanned copies too haven’t been signed by them.”

In the case of Vernon Gonsalves, the police listed some books seized from his house as evidence against him. “Those are not banned books, and the case is anyway not about the possession of books,” says the lawyer. Rights activists fear this is the beginning of a “new emergency” as the accused are not getting bail despite the flimsy evidence and a public outcry for their release.

According to Colin Gonsalves of the Human Rights Law Network, the Supreme Court should have protected the activists, but it refused to intervene last September on the basis of a public interest litigation filed by historian Romila Thapar and four others. “It was a big mistake. The police know there is no evidence, but the intention is not to convict, but to keep them behind bars as long as possible,” says Gonsalves.

Last Friday, while arguing for Bhar­adwaj’s bail in the Bombay High Court, advocate Yug Mohit Chau­d­hary said that not a single document cited by the Pune police against her was recovered from her electronic devices. The high court is hearing the bail pleas of Ferreira, Gonsalves and Bharadwaj after the Pune sessions court refused to grant them bail last year.

During the hearing, the lawyers also argued that the police made the arrests without credible evidence. Slamming the delay in the judicial process, Indian Association of People’s Lawyers (IAPL) vice president M. Venkanna says Bharadwaj’s arrest is a blatant violation of human rights and civil liberties. “A committed activist, she chose to fight for the less privileged. She was in Chhattisgarh in the coal mining area rallying adivasis and workers who protect the natural resources,” he says. Bharadwaj was also a member of IAPL.

Shoma Sen’s daughter, Mumbai-based filmmaker Koel Sen, points out that unnecessary delays and twists in the case make getting bail difficult. For Koel, last year has been tough without her mother around. “Unlike my mother, I lack strength and will power. We are aware that the attempt will be to drag this as long as possible, to tire out the families physically, emotionally and fin­ancially,” she says. “My mother is a very strong human being. She has fought all her life for the rights of women and the rights of the oppressed. The Bhima-Koregaon case is another reminder of the many divisions in our society—caste, class, gender,” says Koel.

Advocate Rahul Deshmukh, who ­han­dles Shoma’s case in the Pune ­sessions court, says the arrest was made on fli­msy grounds. “Letters allegedly recovered from Wilson’s laptop are the only evidence in the court against her. It’s all based on presumption,” says Deshmukh. According to Koel, pro­cedural delays due to the prosecution and other factors make the trial process itself a way of punishing all the accused without any need to convict them. “The Pune district court judge suddenly got transferred at the end of June, so the bail arguments had to be heard again. It automatically delayed the process,” she says.

Varavara Rao’s brother-in-law, cult­ural activist and journalist N. Venugopal, says they are getting ready to challenge the rejection of the bail plea by the Pune court on September 6. “There are two kinds of bail applications—the default bail and one based on merit. The second bail application of all the accused based on merit has been kept pending,” he explains. “The second application would be heard only after the cloning process of the confiscated digital material, and it can take up to three years to get all the data copied.”

Though Rao has been arrested earlier on other charges, his youngest daughter Pavana, a college lecturer, says it is more distressful this time considering  the poor conditions in Yerawada jail and that her father is 80 years old now. “The distance is a disadvantage,” she says. “When he was in a Telangana jail, they at least used to follow the jail manual. But not in Yerawada. When Gadling asked about the manual, the superintendent said it’s not meant for prisoners. This is punishment without trial. They have booked them under UAPA. The process they are following has been unlawful from the beginning.” Koel adds: “I just wish to remind everyone that there are nine innocent people, human rights activists, languishing in jail for over a year, for absolutely no fault of theirs.”

Lawyer and trade unionist, one of the leaders of Chhattisgarh mine workers

Poet and a leader of the Revolutionary Writers Association, Andhra Pradesh