School teacher, wife and son's death in Murshidabad has triggered a bitter political war. The BJP is clearly trying to win some brownie points 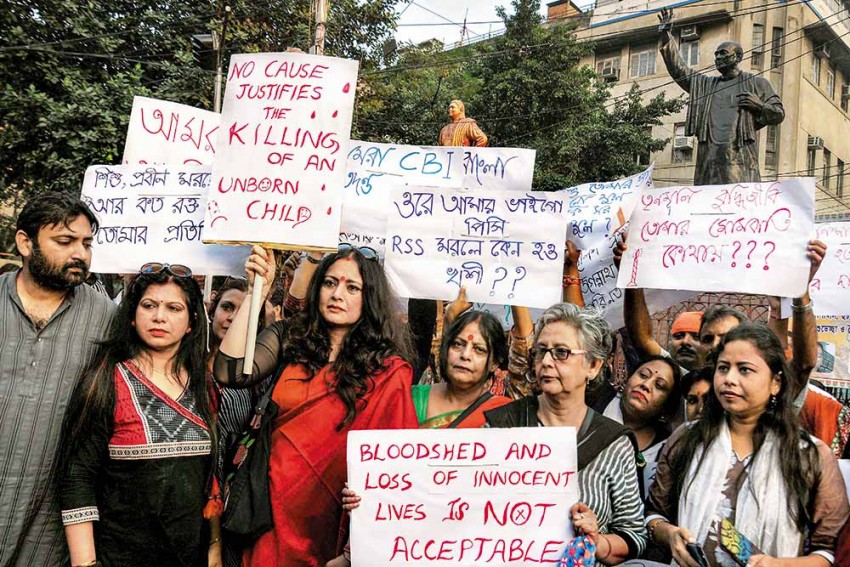 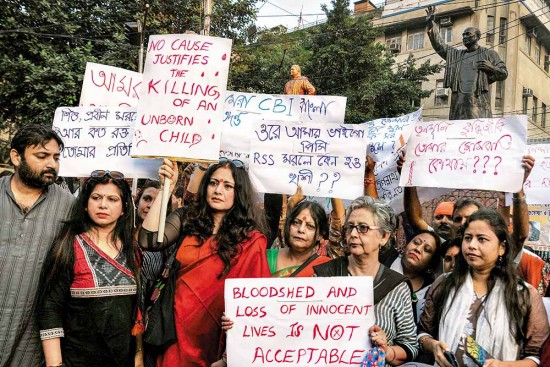 Things have come to a pretty pass in Bengal. Any mishap runs the risk of being cast in the mould of the raging political feud in the state, where a sorely challenged Trinamool Congress takes on an asce­ndant BJP on a daily basis. Bandhu Prakash Pal, a 35-year-old school tea­c­her, his wife and eight-year-old son were murdered in their home in Jiag­anj, Murshidabad during Durga Puja. A nauseous furore was fashioned immediately, with the BJP-RSS comb­ine laying claim to the dead as their own.

BJP leaders started imputing the murders to political vendetta; the accusing finger, naturally, pointed to the TMC. There were also attempts to give it a communal colour. Ironically, even after Pal’s relatives denied his having any political affiliation, BJP leaders continued their clamorous chant against the ‘political murder’. Then, West Bengal governor Jagdeep Dhankhar joined battle, observing in a terse statement that this reflected Bengal’s poor law and order situation. When family-members stressed Pal’s apolitical nature, state BJP president Dilip Ghosh and others staged a dharna in Calcutta. A relative of Pal says an RSS worker also offered financial inducements, which was promptly turned down by the family.

However, the controversy gained force after the murder of the young family was splashed in the media, with director Aparna Sen echoing the BJP claim in a concerned tweet: “Pregnant wife and child of RSS slaughtered in our own WB!... Madam CM, please ensure the perpetrators are brought to justice! Irrespective of political inclinations, all citizens of WB are Ur responsibility. You are CM to all.” As if on cue, Delhi RSS head Alok Kumar raised the old BJP demand for imposition of President’s rule in West Bengal. According to Sayantan Basu, a state BJP leader, the state unit has sought appointments with President Ramnath Kovind and Union home minister Amit Shah to apprise them of the situation in West Bengal. Dilip Ghosh, however, said imposition of President’s rule was not on the cards at this stage.

Swooping on every crime, claiming victims as their own...BJP-RSS have learnt their lessons well from Mamata.

But soon after, the police and CID sta­r­ted digging up a financial angle to the murder, with personal enmity at the root of it. They detained four persons in conn­ection to the crime, then set three of them free. According to preliminary inv­es­­ti­g­ation, Pal had a business of chain mar­ke­t­ing with a partner whom he gave Rs 7 lakh after borrowing from the market at a high rate of interest. He never got the money back. The partner is in police custody.

Meanwhile, politicians are losing no time in rushing to Jiaganj to show solidarity with Pal’s family. On October 12, a CPI(M) delegation led by its district secretary visited the Pal residence. It was followed by two separate delegations of Con­gress and TMC the next day. While they all flatly condemned the BJP-RSS for com­munalising the incident, the CPI(M) and the Congress blamed the TMC gove­rnment for having failed to maintain law and order. Not to be left out, district BJP workers took out a procession in Jiaganj, demanding a CBI inquiry into the murder.

The BJP-RSS strategy is similar to that of Mamata Banerjee when she was opposition leader. She was known for claiming almost every murdered person as her party worker/supporter who was killed by the CPI(M). The most famous case was that of Dipali Basak, a deaf and mute girl in Nadia who was raped by a local hoodlum allegedly loyal to the ruling CPI(M). In December, 1992, Mamata, then a junior minister in P.V. Narshima Rao’s cabinet, took her to Writer’s Building and sat on a dharna in front of CM Jyoti Basu’s chamber. When Subhas Mukhe­r­jee, the famous Leftist poet, died in his old age, Mamata claimed his body and, ignoring his wife’s wishes, made a gross political show of his fun­eral. CPI(M) leader Shya­mal Chakra­borty once commented that TMC workers were always waiting at cre­­matoriums to claim bodies. Also, like the BJP, she used to demand a CBI inq­uiry into every untoward incident. Bengal has a long history of political violence, and the politics over corpses is not a new phenomenon here. With the passage of time, the actors have merely changed.

As Swaraj India’s Yogendra Yadav sum­med it, “It only exposes the true character of politics in West Bengal. Though it is not the first instance of this kind, the development over the Jiaganj murders has surpassed all the past instances.”

The Amazon and Aarey, Nilgai And Nero