No less than a powerful Cabinet minister, Prime Minister Narendra Modi counts on a close-knit team of senior bureaucrats to realise his vision for India 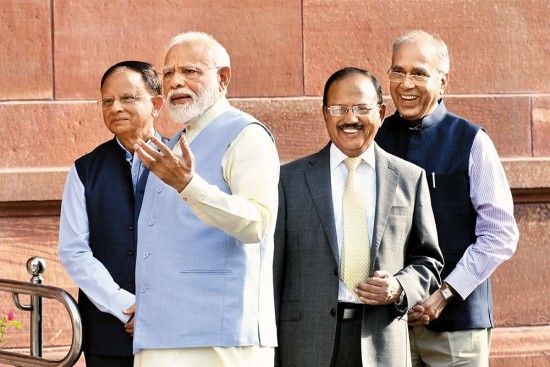 A joke often heard in the corrid­ors of power is that files had to travel from ‘Pillai to Pillai’ in the UPA government and now things get settled much faster—between Misra and Mishra. There may not have been too many ‘Pill­ais’ in Manmohan Singh’s government, but there was surely a predominance of Malayali officers, including many from the Kerala cadre. And ­Misra and Mishra, or ‘Bade’ Misra and ‘Chhote’ Mishra, are PM Narendra Modi’s principal secretary Nripendra Misra and additional pri­ncipal secretary P.K. Mis­hra. Along with national security adviser Ajit Doval, they form the fulcrum of Modi’s PMO, and all three have been given the status of cabinet ministers, making them senior to the MoS in the PMO, Jit­endra Singh, in the ­table of precedence. Earl­ier, when their position was equivalent to that of an MoS, protocol allowed a cabinet minister to call Mishra to his office to discuss matters of transfers, postings and appointments. Not anymore.

“Power was centralised in the PMO even during Modi’s first term, but this PMO will wield even more power as cabinet rank gives these bureaucrats more authority,” says a senior IAS officer. “The PM has enough confidence in them to give them the authority to dictate terms by enhancing their status in the hierarchy.” According to this officer, this was also necessitated after the PM’s trusted diplomat S. Jaishankar, a 1977 batch IFS officer, was made external affairs minister. “The three PMO officers are senior to him in the civil services and the PM wanted to avoid a situation where they had to report to their junior,” he explains.