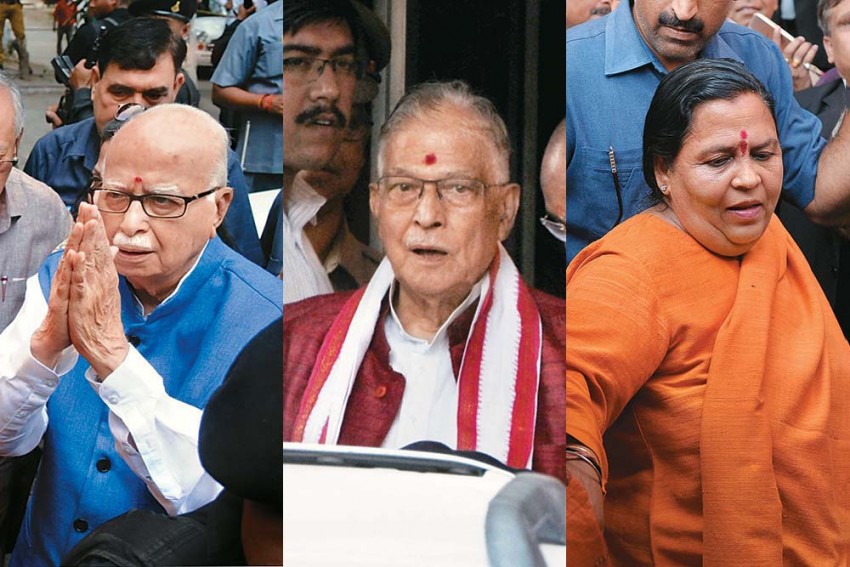 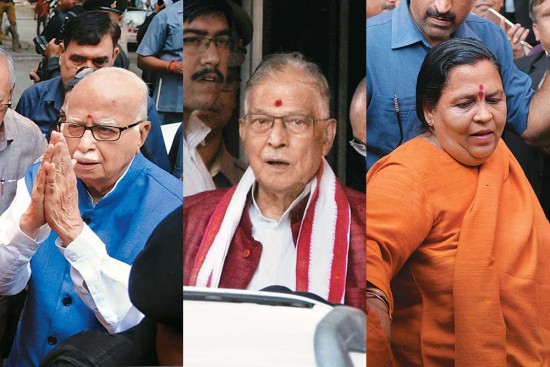 For the past three weeks now, a five-judge Constitution bench of the Supreme Court has been ­assembling on every working day to hear submissions by lawyers appearing in the Babri masjid-Ram Janmabhoomi title suit. Led by Chief Justice Ranjan Gogoi, the bench has to decide which of the parties in the decades-old case has a valid claim over the 2.77 acres of disputed land in Ayodhya. With Gogoi retiring on ­November 17, the buzz is that the country’s most politically and communally sensitive case may finally see ­closure in the months ahead.

Some 550 km away, in the Old High Court complex of Lucknow, another trial is on. This one seeks to fix the culpability of “lakhs of kar sevaks”—a majority of them still unidentified—who participated in the demolition of the Babri masjid on December 6, 1992. The trial in Lucknow is also to determine if BJP leaders L.K. Advani, Murli Manohar Joshi, Uma Bharti and several other members of Sangh Parivar outfits such as the RSS, the Vishwa Hindu Parishad and the Bajrang Dal were guilty of a criminal conspiracy that culminated with the demolition of the mosque. The ominous task of disposing of these cases lies with Special Judge S.K. Yadav, who has been presiding over the trial since April 2017.

The day-to-day proceedings in the title suit gets regular media coverage, but the demolition trial is rarely reported. The title suit has senior advocates Rajeev Dhavan, C.S. Vaidyanathan, Ranjeet Kumar and S.K. Jain, among others, arguing on behalf of interested parties like the All India Sunni Waqf Board, the Ram Janmabhoomi Nyas, Ram Lalla Virajman and the Nirmohi Akhara. The demolition trial, despite high-profile accused like Advani and Joshi, rarely ever witnesses the appearance of a renowned lawyer. Since it began daily hearing of the title suit on August 5, the Supreme Court’s Constitution bench has at times devoted the entire day for arguments in the case. In the demolition trial, by contrast, special judge Yadav often spends the entire day hearing other cases because those summoned to depose in the Babri masjid case, or even counsels engaged by different parties, rarely turn up.

It is, thus, no surprise that while the title suit proceedings in the apex court are expected to be wrapped up soon and a verdict likely by November, the dem­olition trial could stretch beyond its new deadline for closure—April 2020. Yadav, who was scheduled to retire on Sept­ember 30, was granted an extension until April 2020 to complete the trial by the Supreme Court this July. The ass­umption that the title suit will see a ­judicial closure before the demolition case is not off the mark under the pre­vailing circumstances.

Justice (retd) M.S. Liberhan, who was appointed by the P.V. Narasimha Rao government, in December 1992, to inq­uire into the demolition of the Babri masjid believes that the apex court should have waited for the outcome of the demolition trial before taking up the title suit. If the title suit is indeed res­olved by November, Liberhan believes that whichever way the demolition trial verdict may swing, in the public eye there will be one of two possible impressions. “If the Supreme Court decides to grant the title of the disputed land to the Muslim parties (M. Siddiq and the All India Sunni Waqf Board), those accused of demolishing the Babri masjid will be established as guilty in the public eye. Similarly, if any of the Hindu parties (Ram Lalla Virajman, Ram Janmbhoomi Nyas or the Nirmohi Akhara) are dec­lared as owners of the site, the criminal act of demolition will get a façade of legal sanctity because the accused will claim that the highest court of the land has held the mosque to be an encroachment on the land that belonged to Lord Ram,” Liberhan told Outlook over telephone.

“It is unfortunate that the demolition trial is dragging,” says a senior advocate appearing in the title suit, who didn’t wish to be identified. “No doubt, there is greater political and judicial will to dispose of the title suit than to hold those accused of demolishing the mosque to account.” The irony, the senior advocate says, is evident. “You have a case where the apex court has to decide whether Lord Ram was born at the disputed site or not—something for which there is ­little documentary or scientific evidence—and then you have the demolition case, where everything—from the mobilisation of the mob to the actual act of the demolition—was witnessed by the whole world and documented for posterity, but the trial court is still struggling for ­closure,” he adds.

Though not all 68 people held guilty by Liberhan are accused in the demo­lition trial, Advani, Joshi, Kalyan Singh, Bharti and Vinay Katiyar were among those charged in the case by the CBI for criminal conspiracy and making incendiary speeches. In the 27 years that the demolition trial dragged on, Advani, Joshi and Bharti have appea­red before the court only once—on May 30, 2017, when charges were framed against them—and are yet to be cross-­examined by the prosecution. Of the over 1,000 witnesses listed by the CBI in the case, less than 300 have deposed before the court since 1992. Over 130 witnesses and eight accused have been reported dead, while the CBI has now, sources say, stopped looking for other witnesses who failed to appear before the judge to ­record their statements. As governor, Kalyan Singh, who was chief minister of Uttar Pradesh when the mosque was ­demolished and stands charged for cri­minal conspiracy besides several other offences in the case, presently has immunity from standing trial and the case against him can only proceed once he demits office next month—that is, if his term isn’t extended.

“To my critics who complained that I took 17 years, I wish to ask: Why are you silent now when the trial in the case has dragged on for 27 years?” says Liberhan. “The reasons for the delay in filing my rep­ort cannot be the same for the trial court. If I summoned a witness or acc­used and the person did not turn up, there was little I could do. The court and the prosecution have powers to issue or seek warrants for those evading summons.... Have these warrants ever been issued? Despite limited resources and powers, I was able to collect enough evidence to draw the conclusions of the inqu­iry. The court and the CBI have way more resources and instruments than any commission of inquiry to ensure speedy trial. Why the delay then?”