Home  »  Magazine  »  National  » Hyderabad Gang Rape-Murder »  1200% Rise In Sexual Assaults, But Who Cares? Even Af, Pak Are Safer Than India For Women

1200% Rise In Sexual Assaults, But Who Cares? Even Af, Pak Are Safer Than India For Women

Women’s security has become a political issue and an election slogan in India. But not much has changed in a country considered among the most unsafe in the world 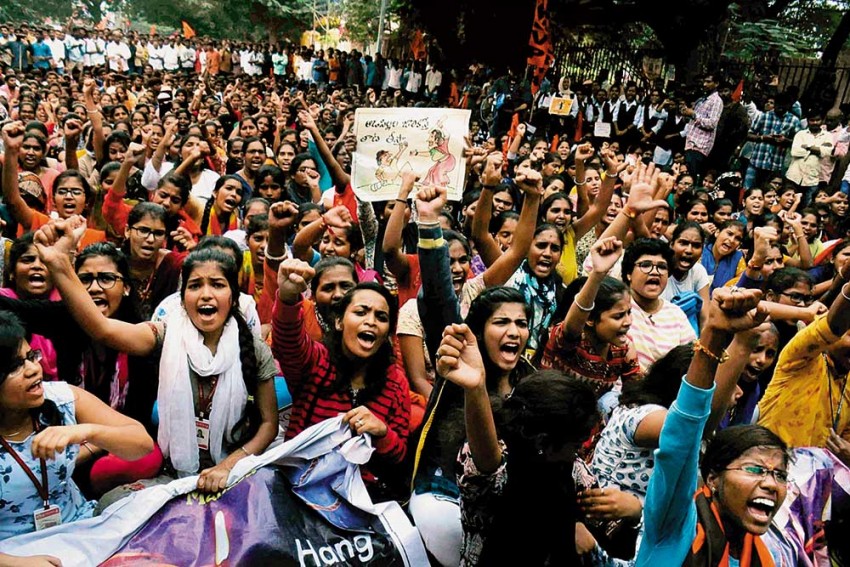 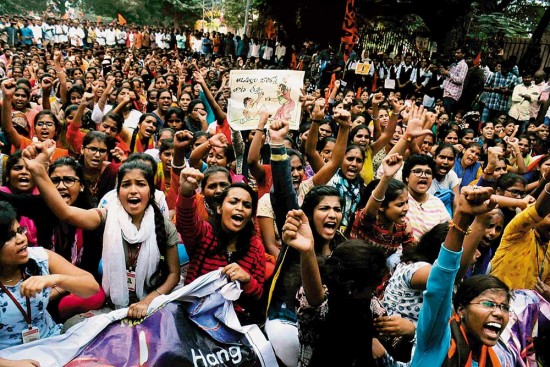 Delhi, December 2012. Hyderabad, November 2019. Only the names have changed. The name of the city, the victim, names of the perpetrators…what remains the same is the monstrosity of the crime. A 27-year-old veterinarian subjected to brutal sexual assault by four men in the Telangana capital, strangulated to death and her body burnt in an attempt to erase all proof. What followed next was a media spectacle—a minute-by-minute dissection of the crime by TV channels competing to outdo each other in how much gory details they can pass off as news. Protests spilled out onto the streets and reverberated in Parliament where some lawmakers even called for castration and public lynching of rapists.

In the noise, what is lost is the cry for help of the woman returning home in Hyderabad when she was gang-raped and murdered. Just like the cry of the 22-year-old paramedic gang-raped and brutalised on a moving bus in Delhi in 2012, a crime that triggered nationwide outrage and protests, hastened the fall of a government at the Centre and saw more stringent provisions introduced in India’s rape laws. Since then, “women’s security” has bec­ome a political issue and an election slogan. But not much changed in a country considered among the most unsafe in the world, ranked 133 among 167 nations in a recent report by Georgetown University’s Institute for Women, Peace and Security. An earlier global survey by Thomson Reuters Foundation had put India on top of a list of ten most dangerous countries for women, ahead of Pakistan and Afghanistan.

Statistics bear out the stark reality faced by women in India, a country where the feminine form is worshipped as the mother goddess. Latest data rel­eased by the National Crime Records Bureau (NCRB) show that more than 33,600 women were raped in 2017—that is, one rape every 15 minutes. Since 1971, when NCRB started collecting rape data, India has recorded a 1,200 per cent inc­rease in cases of sexual assaults. What the data hides is the fact that among the accused are pol­itical leaders, elected lawmakers, self-styled godmen and sec­urity personnel; a CRPF jawan is among three people arrested in the first week of November for raping a minor in Uttar Pradesh. The story becomes even horrific when crimes such as the multiple rape-and-murder of an eight-year-old girl in a temple in Jammu’s Kathua surfaces, very frequently, from each corner of the country.

Brig (retd) G.B. Reddi, a Hyderabad-based political commentator advocates even more stringent laws to act as deterrent. “Unfortunately, these rape crimes only make media headlines.  They sensationalise these crimes by showing public outrage and furore, but fail to force the government to bring any deterrent laws till date,” he tells Outlook. “What happened post-Nirbhaya?  Buckling under pressure from activists, the government could bring in only capital punishment, which is no deterrent at all.  The demand was either castration for lesser crime and death penalty for gang rape and murder.  Nothing less can prevent heinous crimes like rape perpetrated on helpless women and children across the country,” Reddi says. Human rights act­ivists, however, call the death sentence a medieval practice that has no place in modern society. They point out that even death sentences have failed to curb such heinous crimes.

The fact also remains that laws lose their sting in the absence of adequate support from its many arms. Police often face allegations of insensitivity while handling rape cases; police in Hyderabad allegedly told family members of the victim, when they had gone to file a missing person complaint, that she might have eloped.  Once the case reaches the courts, they drag on and on, the victims subjected to recall their ord­eal over and over again. NCRB data show that conviction rate in rape cases is just 32 per cent, which is attributed mainly to delay in completion of trials. Delay in justice del­ivery has become a talking point once again with the Hyderabad case coinciding with President Ram Nath Kovind considering the mercy petition of one of the convicts in the 2012 Delhi gang rape. Four accused were sentenced to death in September 2013, the minor got three years, the maximum under juv­enile laws of the time. One of the accused was found dead in Tihar jail.

Immediately after the 2012 case, the consensus had veered towards more fast-track courts (FTCs) to handle rape cases and speed up justice delivery.  In 2013, the government had proposed to set up at least 1,800 FTCs between 2015 and 2020. Almost seven years later, in July this year, the Centre announced a new scheme to set up 1,023 FTCs with the Nirbhaya fund. D.K. Garg, a Supreme Court lawyer, who was a defence counsel in the infamous Ranga-Billa case of 1978 when a minor was raped and murdered in Delhi and her brother killed, favours implementation of an instant justice del­ivery system by not only setting up FTCs but also removing unnecessary legal hurdles. “Even if fast-track courts decide the matter in, let’s say, six months, it will take several years to get finality in high courts and the SC. What happened in the Nirbhaya case? The FTC pronounced the death sentence in September 2013 but they are yet to be hanged.”

Lawyers and activists point to the Nirbhaya fund, a Rs 10-billion corpus announced in 2013 to initiate projects with “features like direct impact on safety and security concerns of women”. Six years later, huge chunks remain unu­sed with the Centre and states. Many of the initiatives have fallen off the radar.  In 2016-17, funds were allocated to various states to support and supplement victims of various crimes especially sexual offences. At least 21 states/UTs haven’t provided compensation to a single victim yet.

Suresh Dagadu Khade, former minister for social justice in the previous BJP-Shiv Sena government in Maharashtra, admits that the state government failed to expedite the process. “I became minister for social justice just for four months and in such a short span of time I took sanction from the Centre to utilise the funds. But soon after that, election date was announced and code of conduct was enforced,” Khade says. He alleges the previous minister was soft on this issue; it was not taken up on priority.

Odisha is another state lagging behind, utilising only 2.55 per cent of the funds allocated to the state. Tukuni Sahu, Odisha’s minister for women and child development and Mission Shakti, was unable to explain. “I can get back to you after consulting my officers,” Sahu says.

Official records show that at least 11 states—including Karnataka, Kerala, Madhya Pradesh, Maharashtra and Rajasthan—have not utilised a single penny of the Nirbhaya fund allocated to them. Criminal lawyer K.T.S. Tulsi says non-utilisation of the Nirbhaya fund shows once the issue goes off the headlines, everyone goes to sleep. “It req­uires a certain amount of commitment which should last longer than the hysteria. It is unfortunate that the money gets collected because of a decision was taken when the matter was hot and after that consistently we forget about it. It takes either the court or another tragedy to wake them up. It is a reflection of our maladministration,” he observes.

Kiran Bedi, the Pondicherry lieutenant governor and India’s first woman IPS off­icer, feels the need for proper utilisation of the Nirbhaya fund for improving visibility of police and enhancing mobility. “We can create infrastructure such as motorcycle patrols and more camera surveillance among others things,” Bedi says. She suggests a holistic approach which she calls 6P, inv­olving people, politician, police, prosecution, prison and press.  “Parents and principals, both int­egral part of people, for value system; politicians for law, budget and community support; police for community policing; prosecution for effective trials and det­errent conviction for the courts; prison for correction and res­torative justice and press for larger awareness,” Bedi adds.

This week, as a debate raged in Parliament over the Hyderabad case, Rajya Sabha speaker and Vice President M. Venkaiah Naidu said: “What is req­uired is political will, administrative skill, change of mindset and then go for the kill of social evil.” But there are many layers to this “social evil”. As a numb nat­ion woke up to the gruesome rape-murder, social media and some news portals pointed out that one of the accused is a Muslim, but conveniently ref­rained from mentioning the names of the other three accused, all Hindus. A soc­ial media user also posted screenshots from a popular porn website: the Hyderabad victim’s name was the most searched term after the case. A telling commentary on a society looking for pleasure in the horror ordeal of a rape-murder victim.

Holes In The System 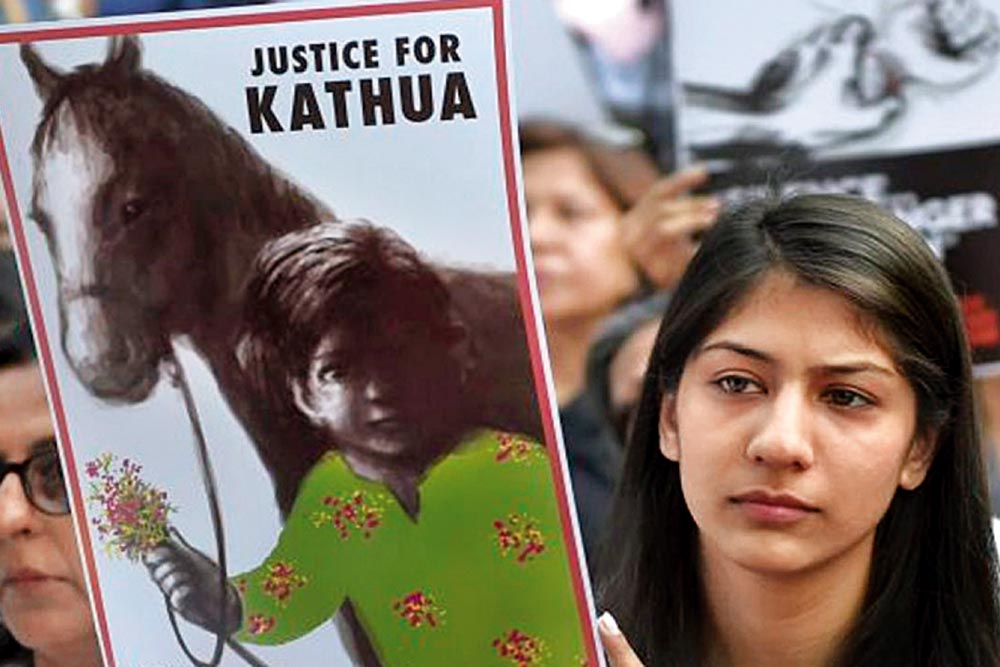 TOUGH LAW The Criminal Law (Amendment) Act, 2018, extends punishment for rape from maximum seven years to life imprisonment. Death penalty to those convicted of raping a girl below 12 years. 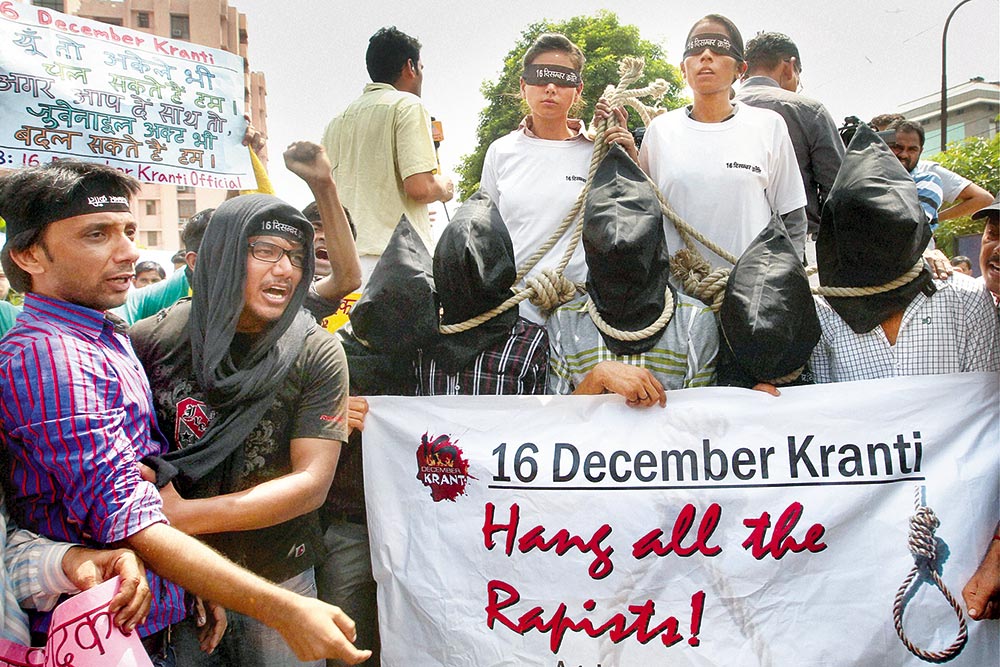 NIRBHAYA FUND The Union government initiated the fund (after the media name given to the December 2012 Delhi gang rape victim) to support schemes for women’s safety. Money given to states not utilised. 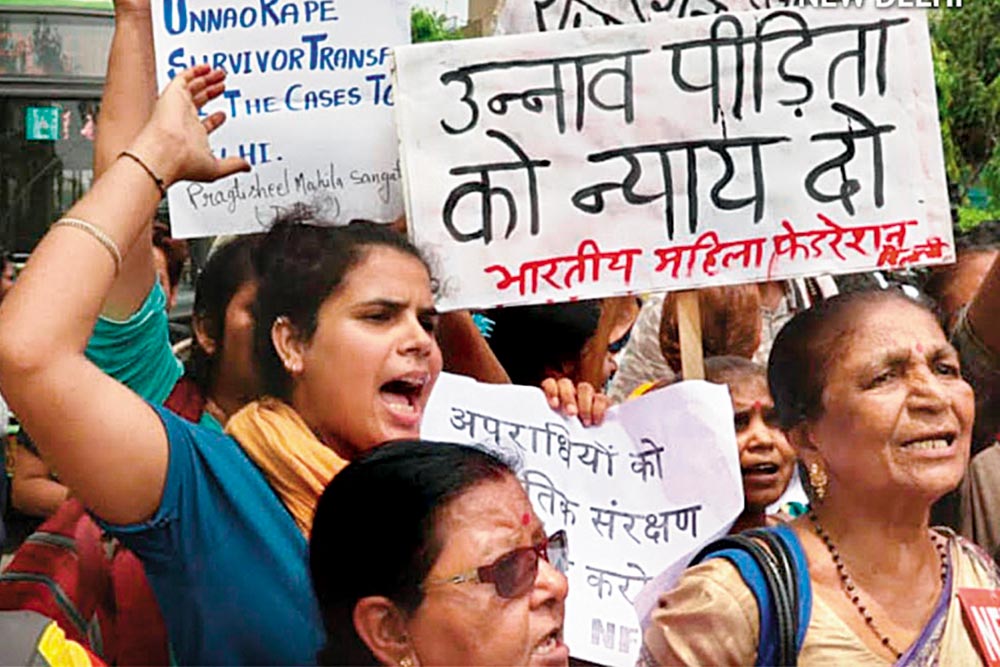 1,023 FAST-TRACK COURTS Almost seven years after the Nirbhaya case, the Centre opened this July a scheme for qui­ck delivery of justice. No such court has come up yet. 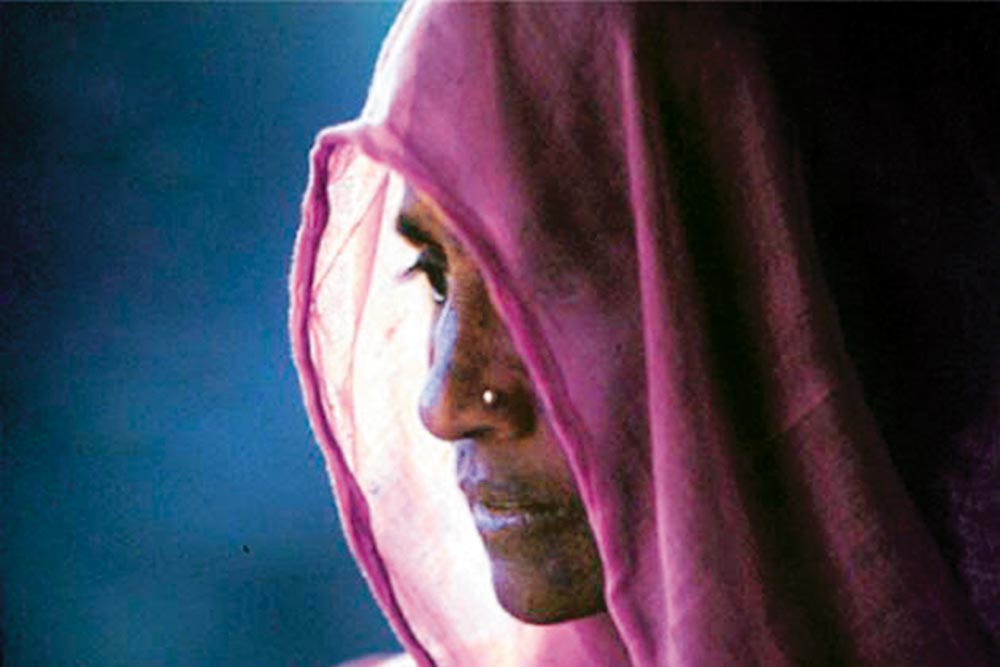 Bhanwari Devi of Rajasthan, gang-raped in 1992.

DIAL 112 This pan-India phone number (like 911 in the US) was launched this year under the Emergency Response Support System, aimed at improving women’s safety. It is not operational in several states. 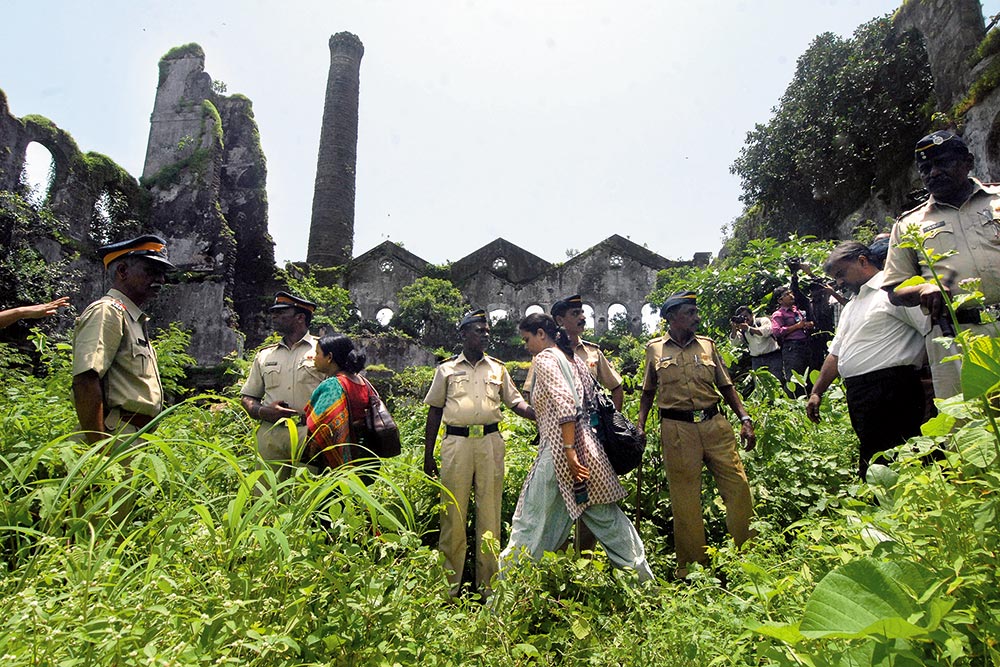 Shakti Mills, Mumbai, a photojournalist was gang-raped in 2013.

MAHILA POLICE VOLUNTEER SCHEME The Union women and child development ministry approved this project in 12 states and allocated funds. But eight states have yet to use the money. 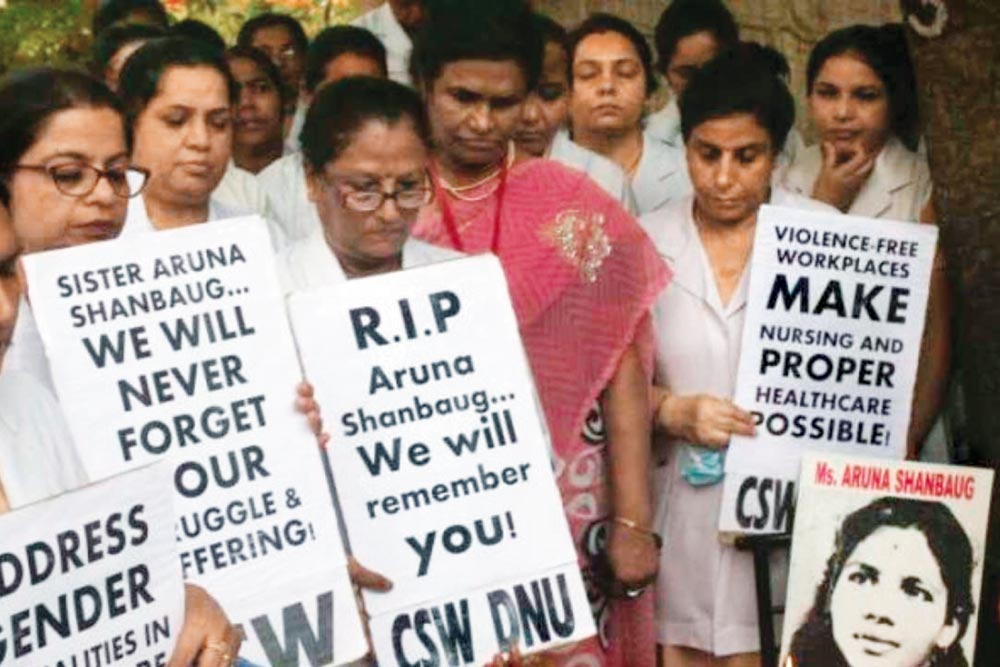 ONE STOP CENTRE SCHEME Launched in 2015, it provides integrated support and assistance under one roof to women affected by violence. Not fully operational in all states.