At The Mercy Of Rain God, Chitradurga On Lifeline Again

Karnataka's peculiar weather pattern has left Chitradurga thirsty for water. Years of failed rains have taken their toll on this district declared drought-hit by the state's disaster monitoring centre 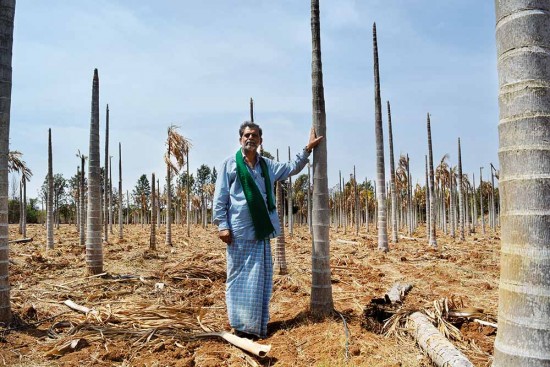 It rained last Tuesday in Challakere. But that only helped to settle the dust and the loose, crumbly earth. Ask anyone in these arid parts and you’ll get the same res­ponse. “We need a few more showers. The tanks have to fill up.” They haven’t, for a long while.

That brief overnight spell brought hope; a cloudy and a rain-laden, breezy start to the day. By 10 am, however, the sky was clear. Past Challakere, as the sun beat down, villagers drove their cattle into a goshala, as they have been doing every day for the past couple of months. The district administration has set up six goshalas in Chitradurga district—one of the driest regions of Karnataka—where cattle get free fodder. For cattle herders close by, it’s a day-care centre—they collect their ration of 5 kg of hay per cattle head, water their stock from the borewell and settle down in the shade for the day until sundown, when they head back home. But there are others who have trudged here from miles afar and cannot make the trip every day. These folks stay put at the goshala for weeks—among them elderly women who have to rough it out in the open. Family members bring them food at mealtimes, or they cook. “If it weren’t for this goshala,” says Sannaboraiah, a villager, “you can imagine the number of cattle that would have been sold off by now.” Those who were able to scratch together a haystack from a previous crop manage by themsel­ves, but others have no choice but to save their livestock thus. “You should have seen the crowd two years ago,” says anot­her cattle herder. There were close to 5,000 heads of cattle spilling out beyond the fence along the roadside, he recalls, some coming from the Andhra border more than 30 km away. The camp had stretched on for months. At the moment, there are a few hundred head of cattle. “They’ll come,” he predicts. “It’s only the start of May. It all depends on the rain.”