In Shah Faesal, the NC sees a bees-saal-baad reflection 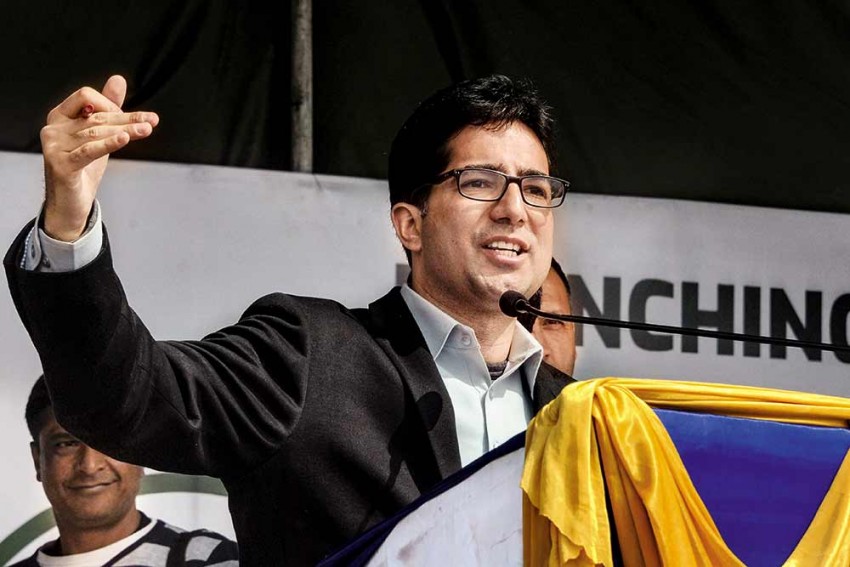 IAS To Politics
Shah Faesal at the launch of his party in Srinagar
Photograph by PTI
Naseer Ganai March 19, 2019 00:00 IST Shah Faesal, Kashmir And The Valley's Politics 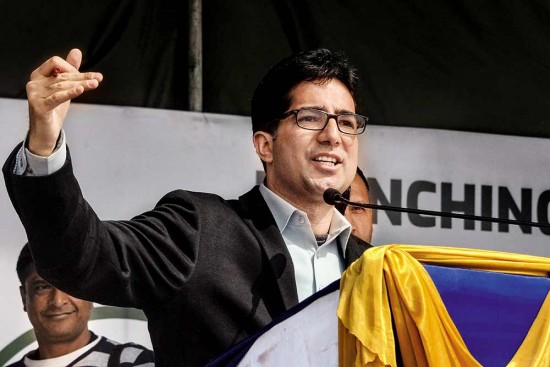 It was exactly two decades ago that Mufti Mohammed Sayeed formed the Peoples Democratic Party (PDP) as an alternative to the National Conference (NC) and the Congress in Jammu and Kashmir. That was 1999—and the NC pulled no punches to accuse Sayeed of doing Delhi’s bidding to muddle the political space of the restive state. Cut to 2019 and a flashback besieges the NC, unsettling it before this summer’s parliamentary and assembly elections. The déjà vu moment: the lau­nch of IAS topper Shah Faesal’s party, the J&K Peoples Movement, in Sri­nagar last weekend.

To put the new entrant into perspective, Tanveer Sadiq, the political advisor to NC vice president Omar Abdullah, said “exactly 20 years ago a party was founded to counter the National Con­ference after it tabled the autonomy report in the assembly and another att­empt on the same pattern is being made today”. The NC leadership always alleges that the PDP is a creation of Delhi and intelligence agencies as it was formed after the J&K assembly passed an autonomy resolution, seeking restoration of the 1953 position to Jammu and Kashmir. The resolution embarrassed the BJP government of Atal Behari Vajpayee as it got resonance at the international level.

Around 70 km south of Srinagar, Omar Abdullah accused Delhi of creating new political parties in Kashmir. And with a disclaimer that he has no issues with new parties, he asked why they come up only in the Valley not in the Jammu region.

Faesal is unfazed by such allegations. Addressing people in Srinagar at the launch of his party, he vouched to emulate the politics of Pakistani prime minister Imran Khan and Delhi chief minister Arvind Kejriwal. He quoted Pakistan’s revolutionary poet Habib Jalib, evoking applause from the audience of around 3000 people: Tum nay loota hai sadyon hamaara sukoon/Ab na hum par chalega tumhara fasoon (You have plundered our peace for too long/No more shall your spells work on us).

“It remains to be seen whether the new party would have something new to offer to the people.”
Omar Abdullah, National Conference vice president

Faesal says several parties wooed him when he resigned from the civil services and were ready to give him ticket for a parliamentary seat. “Now that I have launched my own party, they are accusing me of being an agent. I left my job 25 years before my retirement. I didn’t leave it to become an agent.” Like the new leader, Faesal’s crowd was confident and outspoken, never hiding their faces from news cameras. Advocate Mir Azad, a young lawyer, who had travelled from Handwara of North Kashmir to attend the rally, says traditional political parties have done nothing for Kashmir. “Faesal is educated and has left a coveted post to join politics. I think it matters a lot for people, especially for the youth, and I think the young generation sees hope in this party.”

Faesal’s entry into politics has more to do with the political vacuum created by the diminution of the pro-Kashmir PDP, which is facing public criticism over human rights violations and undermining of constitutional privileges of J&K during its two-and-half-year rule with the BJP from 2015. A section of people, disenchanted from the NC and its rival PDP, are looking for an alternative voice in Faesal.

The Valley’s politics revolves around the Kashmir issue and its resolution. Faesal, in his 29-point agenda, has made “peaceful resolution of the Kashmir problem as per the will and aspirations of the people of Jammu and Kashmir state” the top objective of his party. It would interesting to watch how Faesal, who is not from any dynastic party and carries no past baggage, makes his mark in the tight J&K space where loyalties are firmly divided. With him are student leader Shehla Rashid and businessman Feroz Peerzada. “Ours is not a party, but a movement,” Rashid says. But sceptics insist Faesal would further divide the votes and add to the disempowerment of Kashmiris in the state.